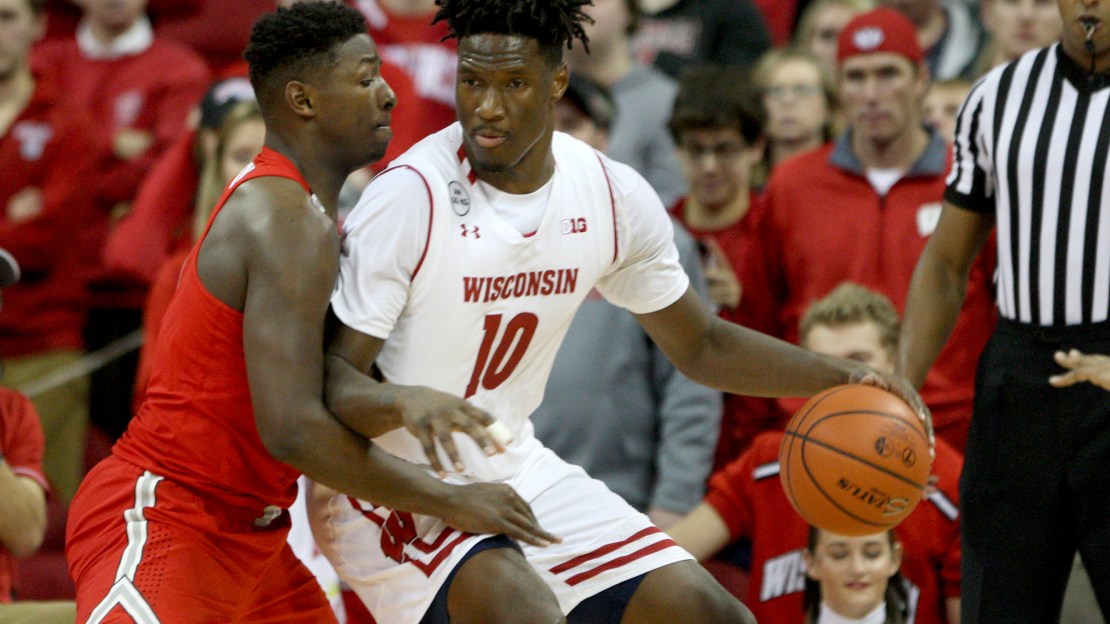 Yet another crazy week in the Big Ten, and that's led to some serious movement in my Big Ten Power Rankings, presented by ArcelorMittal.

1. Wisconsin (14-3, 3-1). The Badgers may not win every game this season and may struggle with certain matchups, but their consistency, their system and their experience make them my mid-season pick to win the Big Ten regular-season crown. As good as they look, there's still plenty of room for improvement.
Last week: 2

2. Maryland (16-2, 4-1). My apologies to Terp fans for (previously) not buying into how good this team is and still can be. It's truly impossible to gauge the impact and chemistry of a team when you rely on so much youth. The combination of Melo Trimble and Anthony Cowan in the backcourt is terrific, as the latter takes pressure off the veteran star on both sides of the floor.
Last week: 5

3. Purdue (14-4, 3-2). Although they slide in my Power Rankings, I still believe Purdue may be the best and most dangerous NCAA tournament team to come out of the conference. The key will be in finding balance between the perimeter play and interior dominance. If the 3-ball isn't falling, the Boilers have to get better about getting easy baskets with better ball movement.
Last week: 1

4. Northwestern (15-4, 4-2). There's been so much talk about this team finally breaking through and making the NCAA tournament. In a way, the talk has been a distraction from how good this team really is. Dererk Pardon is getting back to full strength, and the combination of Bryant McIntosh, Vic Law and Scottie Lindsey causes matchup problems all over the court.
Last week: 6

5. Indiana (12-6, 2-3). I will likely be saying this every week: I still believe the Hoosiers have the highest ceiling in the Big Ten. At some point, I wouldn't be surprised to see Tom Crean go back to using Juwan Morgan as the "initiator" for his offensive attack; it worked well for them at times last year. Teams have done a good job taking passes away and taking the rhythm out of the game for Indiana. Hang in there, Hoosier fans.
Last week: 4

6. Michigan State (12-7, 4-2). Tom Izzo will tweak what he needs to tweak throughout the course of this season, and the young Spartans will eventually buy into the process and buy into their roles. Once they do, we'll see how good this team can and will be. I still believe this is a team that will make a run in February and March, and, at that point, all of the youthful struggles will be forgotten and Izzo will remind us all why he's a Hall of Famer.
Last week: 7

7. Minnesota. The Gophers went 0-2 for the week, however I still wouldn't jump ship on this group. Both losses came on the road, and we need to remember that this is still a young team. Best to have your mid-season lull now and gear up for a strong push to finish conference play. Richard Pitino's offensive struggles will not persist as this team has too many weapons to lock down the way MSU and PSU did this past week.
Last week: 3

8. Penn State (11-7, 3-2). I'm moving the Nittany Lions up because it would appear that Patrick Chambers' young freshmen are buying into playing with effort and energy first and letting their talents take over next. The early season losses likely challenged the pride and egos of this group and they seem to have responded. The offense hasn't been pretty, but their versatility and depth have turned them into one of the better defensive teams in the conference thus far.
Last week: 12

9. Nebraska (9-8, 3-2). The Huskers have two key weapons in Glynn Watson Jr. and Tai Webster. The only issue seems to be that both need to produce at a high level for this team to win Big Ten games. Their tough non-conference schedule seems to have helped them learn how to play without fear or caution, which makes them a difficult team to face. I still have them "in the mix."
Last week: 8

10. Iowa (11-8, 3-3). Hawkeyes fans may have to live with the Jekyl and Hyde that is a young basketball team. Following their superb performance vs. Purdue, you would have sworn that they were an NCAA tournament team. Then, they lose by 35 at Northwestern. The key will be defensive cohesion and communication, as the Iowa defenders seem to spend too much time chasing the play. The potential is there, but getting stops and developing consistency on the defensive end will determine their fate this season.
Last week: 9

12. Illinois (12-6, 2-3). I was really high (in praise and expectation) on the Illini coming into the season. I still believe the potential is there for them to be one of the better teams (likely middle of the pack) in the conference, but inconsistency has plagued this bunch. Although they are "old," with two sixth-year guys, they still don't have a lot of time together on the floor. Maverick Morgan has been terrific, and it seems as if the offense is better when it flows through him.
Last week: 11

13. Ohio State (11-7, 1-4). Beating Michigan State reminded us how good this team could be, although the Buckeyes have been anything but consistent. Trevor Thompson and Jae'Sean Tate always play with great energy, something the rest of the team needs to bring on a consistent basis. Losing Keita Bates-Diop for the season certainly hurts this team, but good teams respond well to adversity. There's still time for the Buckeyes, assuming they can build on the Michigan State win.
Last week: 13

14. Rutgers (11-8, 0-6). The Scarlet Knights may be where they were (in the Power Rankings) last year, but this is not the same team and every Big Ten coach will attest to that. There is much better talent, much better balance and a system with which individuals and the team can thrive. They will compete this season and will win a few conference games when all is said and done.
Last week: 14