BTN's Shelley Till: Banham wants to be 'the best player on the floor' 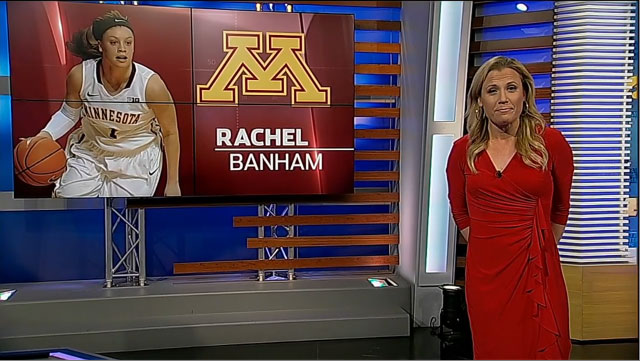 We often overuse the word "greatness" in sports. You don't just roll out of bed one day and become great; greatness is cultivated over time through hard work. In the case of Minnesota's women's basketball player Rachel Banham, greatness has arrived. I chatted with Banham after her epic 60-point performance at Northwestern, a showing that broke the Big Ten women's basketball single-game scoring record, tied the NCAA one, and had the basketball world buzzing this weekend.

The last time a Division I women's basketball player scored 60 in a game? It was Long Beach State?s Cindy Brown in 1987. So Banham's 60-point game is one that will define her for everyone moving forward.

When I asked her how she felt after Minnesota's 112-106 double-OT victory against the Wildcats, her response was telling: "It feels great! I?m really happy we got the win."

See? It's winning that drives Banham, a competitive red-shirt senior who overcame knee surgery to finish her career at Minnesota. So far this season she has set the Gophers' career records in points scored (2,773 through Monday) and field goals (977).

For Banham, it started growing up with brothers Cole and Blake. They would constantly compete against each other, even taking the game inside the house and drawing a square on the wall for a game of hoops in the kitchen.

Fast forward to today, and she?s still being constantly double-teamed. There were several made shots in the Northwestern game where she had multiple defenders draped on her. She credits the scout team for her ability to finish plays – the daily practice plan has her running against face guards, double teams, triangle-and-2 defense. While all of that helps, what it really comes down to is her desire to take over. She wants the ball, and she wants to score.

"I tell myself I?m the best player on the floor," Banham said, "And I have to take over to help my team win."

Every successful athlete has people that drive them to be their best. For Banham, it?s no different. She raves about the support of her family, especially her parents Donald and Mel. She's also inspired by her late grandfather, Donald, who passed away last year.

And Banham finds strength in her cousin Elijah, who suffers from cerebral palsy and plays wheelchair basketball.

"I play for them because I know they would love to be here and they can?t," Banham said. "And, of course, Kobe Bryant motivates me as well!?

Sitting out a year after an ACL injury last season also taught Banham more about the game. She learned to be a better leader by watching and learning from the sidelines. And as she rested her body, she also watched her teammates play and realized she needs to give 100 percent on every play. Banham also believes she sees the court through a coach's eyes now, so she'll share more with coaches. Coaches value that rare ability.

Here's what Banham would tell her younger self: Take better care of your body. Eat well. Get stronger and be in better shape. Now she wants to get better at attacking the rim and finishing the shot – especially late in games. Her ultimate goal? Get the Gophers to the NCAA tournament and make a serious run.

Banham takes her leadership very seriously and emulates former Gophers player Lindsay Whalen in the way that she made everyone around her want to be better. When it's all over, Banham wants to be remembered for her work ethic, leadership, and loyalty.

I asked her how she handles the growing pressure and attention.

"I don?t really think about it much," Banham said. "I just keep it light and have fun. If you can laugh about stuff, it helps everyone.?

Work ethic, leadership and loyalty mixed in with a little fun?

Sound likes a recipe for greatness.

Our @swhitej2 talks with @GopherWBB's Rachel Banham fresh off her career day against Northwestern. https://t.co/2CJNE2l1xy