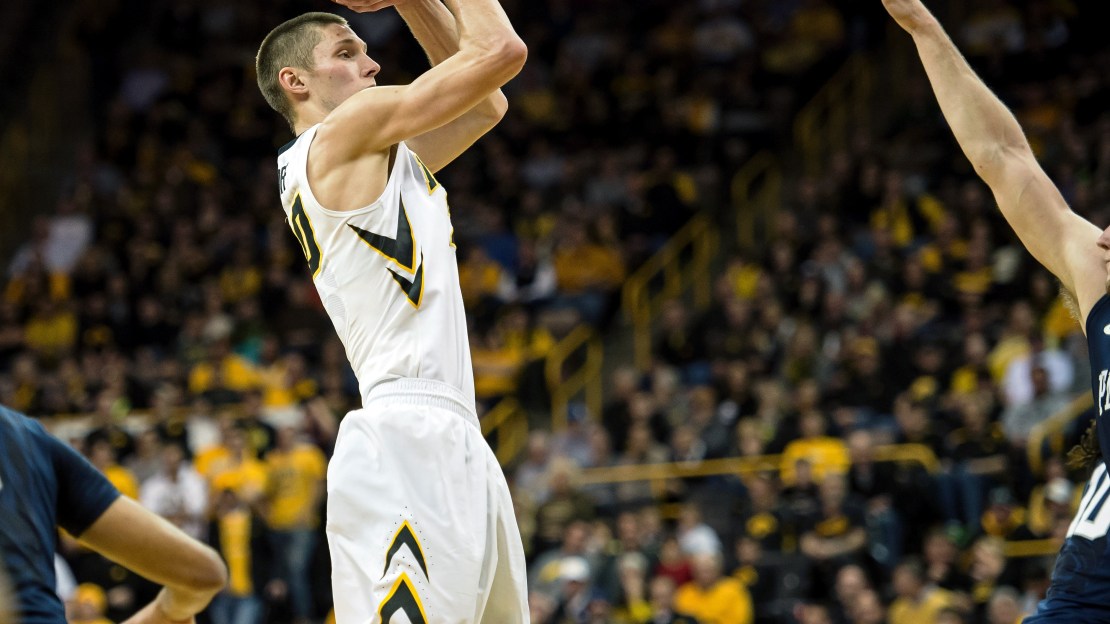 We are now past the halfway point in conference play, and we have certainly learned a lot. There is still plenty of basketball to be played, but it?s time to start to identify the teams that are maintaining a high level of play and/or trending upward at the moment.

The parity in college basketball and in the Big Ten in particular makes these rankings a real challenge – remember, this is a gauge of how teams are playing right now. On that note, here are my Feb. 8 Big Ten Men's Basketball Power Rankings, , presented by ArcelorMittal.

1. Iowa (19-4, 10-1). The Hawkeyes exposed some vulnerabilities against the Terrapins in College Park, but as you watch that game back, you realize they shot terribly and still gave themselves a chance in that game. Their remaining schedule sets them up well to be Big Ten regular season champs.
Last week: 1

2. Maryland (21-3, 10-2). Although I still think the Terps should be scoring more points and playing faster on both sides of the ball, the length and depth Mark Turgeon boasts makes them one of the best defensive teams in the conference. This team has not even reached their full-potential yet, and they?re still one of the best teams in the country.
Last week: 2

3. Michigan State (20-4, 7-4). It would appear as if the Spartans have turned the corner a bit. Yes, 3-point shooting has been a huge part of that, but, ultimately, they are looking more and more like the team we saw dominate the competition earlier this season. Getting Tum Tum Nairn back will be key for the Spartans; he is their best on-ball defender and allows Denzel Valentine to play off the wing, which gives him ideal spacing to work with. This team will be poised to make another late-season run.
Last week: 5

4. Purdue (19-5, 7-4). The No. 4 spot was a toss-up between the Boilermakers and the Hoosiers. Neither team has any signature wins, so I had to go with the most complete team at the moment. Purdue still needs to find consistency at the guard position and Vince Edwards needs to continue to become the star that he can be. A.J. Hammons continues to impress.
Last week: 6

5. Indiana (19-5, 9-2). The schedule in February and March is brutal for the Hoosiers. They took care of business against Michigan but couldn?t find any rhythm offensively against the Nittany Lions. Elite (or even good) teams need to beat the teams they are supposed to beat, at home or on the road. Iowa and Michigan State are up next, meaning there are two opportunities to get that Penn State loss back and pick up a signature win.
Last week: 3

6. Wisconsin (14-9, 6-4). Toss out the non-conference record, I?m focusing on who and what this team has been in conference play. Greg Gard has done a terrific job turning this season around with structure and simple principles on the defensive end. Nigel Hayes gets to the foul line better than anyone else in the country, and Ethan Happ is someone who Badger fans should be very excited about.
Last week: 8

7. Michigan (17-7, 7-4). The Wolverines have a ton of potential. They shoot the ball very well but need jump shots to fall in order to win games. The main issue is not with how they win. It is how they lose. Most of Michigan?s losses are ugly. Even going back to Xavier, SMU and UConn. Not competing in a loss exposes "the toughness issue." As good as this team can be at times, toughness will be what determines their success or failure.
Last week: 4

8. Ohio State (14-10, 6-5). The Buckeyes have to get dialed in for the next four games. They have Northwestern, Rutgers, Michigan and Nebraska before finishing conference play with Michigan State (twice) and Iowa. Thad Matta will love this (more experienced) team next season, but they can be really good (at times) now. Consistency and playing with a sense of urgency is the key.
Last week: 7

9. Nebraska (13-11, 5-6). Shavon Shields and Andrew White III have consistently delivered. The environment in Lincoln is tough for any opponent, and Tai Webster and Glynn Watson Jr. have emerged as additional options for Tim Miles and the Huskers. I really like this team, but it is so hard to make a move up in this conference without adequate depth.
Last week: 9

10. Northwestern (16-8, 4-7). When Tre Demps plays well, this is a very difficult team to stop. Demps has struggled this season, and it has made it even more difficult for Bryant McIntosh to make plays for himself and his teammates. Losing five games in a row is tough to bounce back from – even if four of the losses came at the hands of Maryland, Indiana, Michigan State and Iowa — all top-25 teams.
Last week: 10

11. Penn State (12-12, 3-8). Anyone who has seen Penn State play is not surprised to see the Nittany Lions beat Indiana. Penn State plays hard and mixes up its defenses, which made it difficult for the Hoosiers to find any rhythm offensively. Making big shots down the stretch certainly didn?t help either. Brandon Taylor has been incredibly effective on the offensive end from multiple spots on the floor. It's tough for anyone to match up against him.
Last week: 12

12. Illinois (11-13, 3-8). After calling the Illinois-Iowa game, it is obvious to see how limited the Illini are simply because of injuries. With three starters on the bench and out for the season, it?s hard to expect much more from Illinois. Malcolm Hill and Kendrick Nunn are terrific scorers, but it is too easy for opponents to key on them and limit their opportunities.
Last week: 11

13. Minnesota (6-17, 0-11). The Gophers show significant signs of improvement, at times, and then they take a huge step back with an 82-58 loss to Northwestern. There are pieces in place with Nate Mason and Jordan Murphy and a top-3 (in conference) recruiting class coming in next season. Without momentum coming out of 2015-16, there will be a great deal of pressure on Richard Pitino and the incoming class next season.
Last week: 13

14. Rutgers (6-18, 0-11). The Scarlet Knights have one of the toughest covers in the conference in Corey Sanders. If not for injuries to frontcourt players, this team would be significantly more competitive. D.J. Foreman and Greg Lewis have worked hard and deserve more credit for their efforts as they are the Scarlet Knights' lone size down low.
Last week: 14