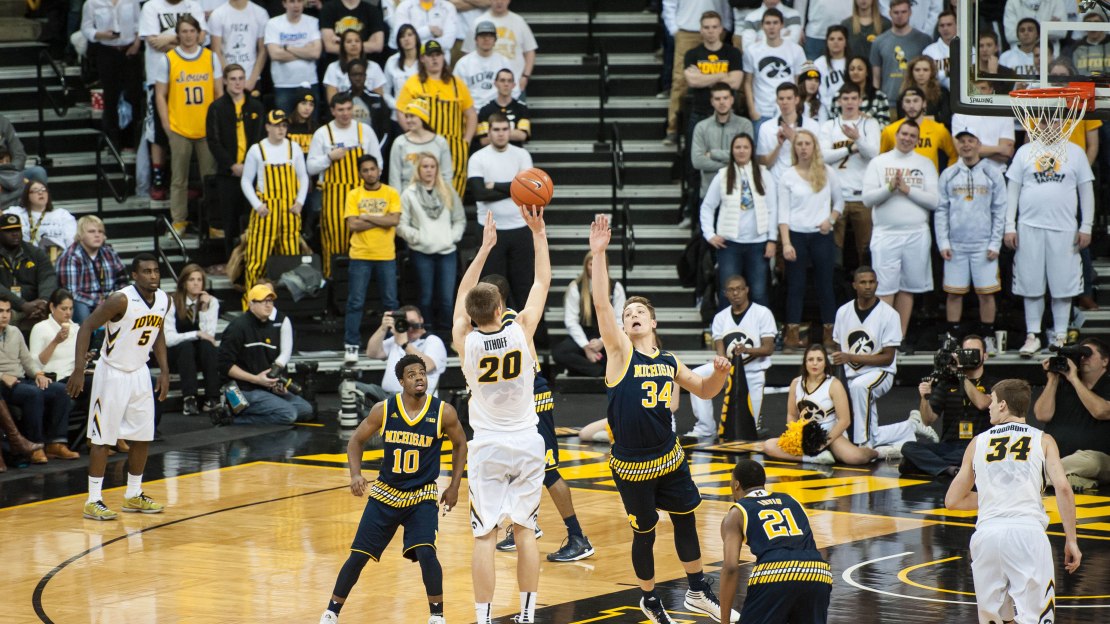 How about the Iowa Hawkeyes?! After last week's wins at then-No. 4 Michigan State and vs. Michigan, the Hawkeyes improved to 5-0 in Big Ten play.

If you're keeping score at home, Fran McCaffery and company have won 11 consecutive Big Ten games, dating to last season. Even more impressive: Three of the wins this season have come vs. the then-No. 1, No. 14 and No. 4 teams.

Editor's note: All records are through Sunday, Jan. 17 action.

1. Iowa (14-3, 5-0). This team continues to shock me. After seeing them in person against Michigan, I took away a few things: 1. They?re deeper than they were in November/December; 2. they?re tougher and play with more intensity than their opponents; 3. Jarrod Uthoff is every bit the Wooden Award Candidate.
Last week: 3

2. Maryland (16-2, 5-1). Melo Trimble and the Terps learned a valuable lesson against Michigan: You can?t simply show up and win games in the Big Ten. I don?t consider the loss a bad loss, but if the Terps don?t play with a sense of urgency every night out, they?ll continue to run into problems. They still have the makeup of a Final Four team.
Last week: 1

3. Indiana (15-3, 5-0). I?d have the Hoosiers higher, considering they are undefeated in the conference, but they have yet to run into a true test in Big Ten play. As emotional as some Hoosier fans may get about that, it?s impossible not to see how the schedule sets up well for Tom Crean and his bunch. The first two tests will come at Michigan on February 2 and at home against Iowa on February 11. We?ll revisit their placement then. In the meantime, congrats to IU Cheerleading on another national championship!
Last week: 5

4. Purdue (15-3, 3-2). The Boilermakers will be the kind of team that may struggle, at times, when an opponent can stretch the floor and make shots. They?ll also always be able to stay in games with their inside presence. The lack of a true go-to guy on the perimeter remains their Achilles heel. If Vince Edwards continues to emerge as an offensive threat and Rapheal Davis can provide some sort of offense to his superb defensive game, the Boilermakers will work their way back up toward the top of the conference.
Last week: 4

5. Michigan (13-5, 3-2). Spartan fans may not like that the in-state rival sits above them in my Power Rankings, but the Wolverines are playing great basketball. They move the ball well, they have multiple playmakers, and they are beginning to find their identity. Initially, I?d be more concerned about this team without Caris LeVert, but I feel the emergence of Duncan Robinson, Derrick Walton Jr. and Zak Irvin will make this team that much better when LeVert returns.
Last week: 6

6. Michigan State (16-3, 3-3). Before everyone goes crazy, let?s remember, this team is 3-3 in conference play. They are not the same team (yet) that they were before Denzel Valentine went out with arthroscopic surgery. They?re not being the aggressor, and teams like Iowa and even Wisconsin are beating them in the toughness department. Tom Izzo will certainly have this cleared up come tournament time, and Denzel Valentine will gradually get his legs back under him. I still wouldn?t be surprised to see them in the Final Four. It?s a process and Izzo loves the process.
Last week: 2

7. Ohio State (12-7, 4-2). Thad Matta sees the potential in this team, but he also seems to understand that there will certainly be some growing pains along the way. The growing pains come in the form of effort, or lack thereof. When the Buckeyes play hard, they can beat anyone. When they don?t, they can lose to anyone. JaQuan Lyle has impressed with his ability to create for teammates and for himself. I still think this could be a dangerous team if they can find a way to make the NCAA tournament.
Last week: 7

8. Northwestern (15-4, 3-3). The loss to Penn State at home was a tough one to swallow, and I know it burns Chris Collins up to lose games they should win. Especially at home. The Wildcats have been good on the road but have to find a way to take care of business at home. The talent is there, the depth is there, but the energy and expectation needs to follow. Getting Alex Olah back will be key for them to be able to make a run.
Last week: 8

9. Nebraska (11-8, 3-3). There are times when I see the Huskers potential and there are other times when I see how reliant they are upon the production of Shavon Shields and Andrew White III. Guys like Glynn Watson Jr., Jack McVeigh and Benny Parker need to produce more considering the quality and quantity of minutes they are getting. Regardless, Shields and White will keep this team in games if they defend and play with Tim Miles-like energy.
Last week: 12

10. Wisconsin (10-9, 2-4). I have a tough time looking at the Badgers at No. 10, but I can?t ignore a 2-4 start to conference play. Yes, they?ve lost a bunch of close games and the changes under Greg Gard have been noticeable and positive. The problem I see is that competitive teams can stay in games if they play within the system, which is what Wisconsin does. But, limited teams struggle to pull out close games, which is what Wisconsin is this season. Remember, folks, it?s a rebuilding year in Madison. Back to the basics.
Last week: 10

11. Illinois (9-9, 1-4). After calling the Illini?s game against Purdue, I thought this team was turning the corner. But then they go and shoot too many 3?s against Nebraska and miss an opportunity to take a big step forward with two good wins in conference. Kendrick Nunn and Malcolm Hill are elite level players, but they have to be able to do more than just score for this team to be effective. I still think this team will be the Big Ten spoilers this season. They can beat anyone in the conference if they shoot it well.
Last week: 9

12. Penn State (11-8, 2-4). The Nittany Lions have (possibly) the toughest 10-game start to the Big Ten season. Pat Chambers and crew also caught Purdue after a loss, which is not the time you want to face the Boilermakers. Brandon Taylor and Shep Garner can keep this team in games and you have to credit Chambers and staff for getting the most out of their team. Whatever they can do this year will set them up for next season when they welcome the No. 2 recruiting class in the conference. Hang tight in Happy Valley.
Last week: 11

13. Minnesota (6-12, 0-6). Much like the Nittany Lions, the Gophers have a tremendous recruiting class coming in next season. Combine that with the likes of Nate Mason and Jordan Murphy, and this team can take a huge jump next season. The key will be for them to build some momentum and find a little rhythm that keeps this team dialed in and competitive throughout the conference season.
Last week: 13

14. Rutgers (6-12, 0-5). At 0-5 in conference, things don?t get any easier for Eddie Jordan and the Scarlet Knights. The next four games include a visit from Purdue and Iowa and trips to Michigan and Michigan State. Jordan and staff have their hands full with two tough tasks. Building a program through recruiting and development and maintaining a competitive edge when challenges persist.
Last week: 14