Power Rankings: Iowa moves up to No. 3 in Jon Crispin's latest list 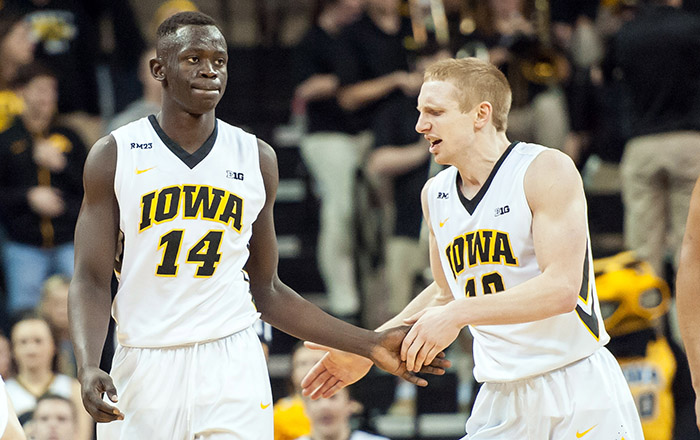 It's Monday, and that means it's time to offer up my latest Big Ten Power Rankings, presented by ArcelorMittal.

Not much changed this week, although Iowa did replace Purdue in the No. 3 spot. Something tells me Iowa fans will appreciate the boost.

Editor's note: All records are through Sunday, Jan. 10 action.

1. Maryland (15-1, 4-0). The Terps not only possess the most balanced team in the conference, they are led by arguably the best point guard in the country. Melo Trimble has emerged as a leader, and his play is turning his teammates into stars.
Last week: 1

2. Michigan State (16-1, 3-1). The Spartans improved in some aspects and learned a lot in the absence of Denzel Valentine. One of those lessons being that they are simply not as good without him on the floor. No doubt they are a top 5 team with Valentine back and healthy.
Last week: 2

3. Iowa (12-3, 3-0). I'm not moving them up because of the immense amount of objection I received from Iowa fans last week, although I have to admit, Hawkeyes fans, you were right. Depth still remains an issue, but they have had an answer for every one of my questions thus far.
Last week: 4

4. Purdue (14-3, 2-2). The Boilermakers are missing one key component: A go-to scorer. Turnovers have been an issue, but I still believe the absence of a go-to guard could be a thorn in their side when games get tight.
Last week: 3

5. Indiana (14-3, 4-0). At 4-0 in conference play, the Hoosiers are gaining momentum and beginning to gel at the right time. The loss of James Blackmon Jr. to injury will certainly affect the offensive output, but the Hoosiers are a better defensive team with Robert Johnson playing starter's minutes.
Last week: 5

6. Michigan (12-4, 2-1). Outside of the tough loss to Purdue, John Beilein's crew has looked dangerous. The only problem is it faces Maryland and Iowa next. Michigan will be a NCAA tourney team if Caris LeVert returns to full health and can continue to be productive and a top distributor.
Last week: 6

7. Ohio State (11-6, 3-1). The Buckeyes' youth was exposed against Indiana. Tom Crean's offense is a tough matchup for an inexperienced defense. If Thad Matta's young bunch continues to compete, it will win a lot of games in Big Ten play. If not, it will be a bit of a roller coaster the rest of the way.
Last week: 7

8. Northwestern (14-3, 2-2). The loss of Alex Olah has certainly proved to be detrimental to the Wildcats, who have had to rely heavily upon the production and aggressiveness of Bryant McIntosh. Getting Olah back, and having Dererk Pardon coming off the bench, will bring this team back into the NCAA tourney mix.
Last week: 8

9. Illinois (9-8, 1-3). I still have a feeling that the Illini will be the Big Ten spoiler this year. They'll beat a lot of good teams when Kendrick Nunn and Malcolm Hill get hot, however their balance and depth, simply due to injury, will be the Achilles heel.
Last week: 10

10. Wisconsin (9-8, 1-3). I have been very impressed with the improvements we've seen in the Badgers over the past few weeks. The Swing Offense has brought much-needed structure to a young and developing team. They'll likely stay in a lot of games but may struggle to squeak out close victories.
Last week: 9

11. Penn State (10-7, 1-3). When you look at some of the pieces at Penn State, you understand why opposing coaches are so concerned with playing the Nittany Lions. They always play hard and do not back down. The addition of one of the top recruiting classes in the conference next year will truly make this team a contender for an NCAA tournament run.
Last week: 12

12. Nebraska (9-8, 1-3). Looking back, the Northwestern loss was pivotal for the Huskers. Tim Miles and crew have one of the best homecourt environments in the conference and closing out home wins will be key for them to be able to bounce back and get on track this season.
Last week: 11

13. Minnesota (6-10, 0-4). The Gophers showed a lot of fight on the road against Penn State, but they are simply a few players short of being the team that Richard Pitino wants them to be. Be patient Gophers fans, because this team will be significantly different next year with a recruiting class that rivals that of Michigan State.
Last week: 13

14. Rutgers (6-11, 0-4). The Scarlet Knights are the hardest team to play armchair quarterback with. I'm not sure anyone out there has the recipe to make this team competitive in such a tough conference. The goal will be to maintain a sense of purpose and steadily develop a competitive culture and environment.
Last week: 14