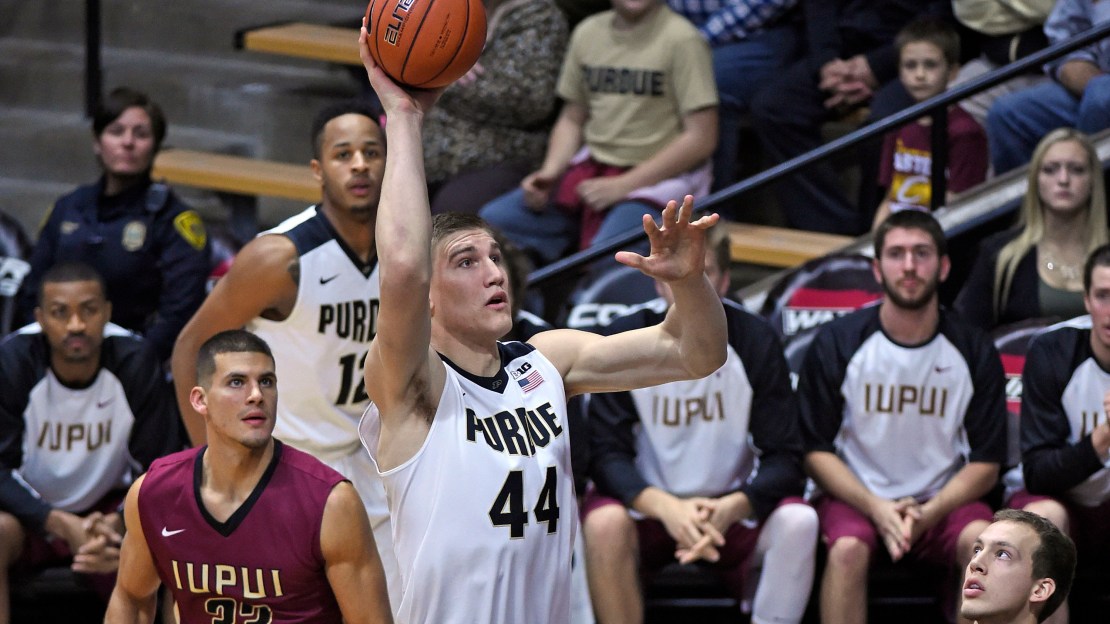 Purdue is rolling. Anyone who has seen the Boilermakers play or has taken a look at the Big Ten standings knows it.

The Boilermakers are 11-0, all 11 wins coming by double digits, good enough to match No. 1 Michigan State's perfect start.

Why all this talk about a team in a post all about players? Because the undefeated Boilermakers place three players on my latest Big Ten Player Rankings.

1. Denzel Valentine, Michigan State. Valentine was very inconsistent late in games last season, but this year he has shined. Tom Izzo is putting the ball in his hands with games on the line, and Valentine has delivered every time for the top-ranked 11-0 Spartans. He came up big again with 17 points in a 58-52 win over Florida.
Last week: 1

2. Melo Trimble, Maryland. Trimble had another exceptional week and has Maryland rolling. Against UConn in New York City, Trimble was at his best, scoring a season high 25 points as the Terps took care of the Huskies 76-66. No point guard in the nation is better at executing the high-ball screen late in the shot clock.
Last week: 2

3. Jarrod Uthoff, Iowa. In Iowa?s rivalry game at No. 4 Iowa State, Uthoff was positioned to outshine Denzel Valentine?s triple-double earlier this year vs. Kansas. Iowa?s senior forward recorded 30 points, on 11-13 shooting (5-6 threes), pulled down six rebounds, blocked two shots, and shut down All-American candidate Georges Niang (4pts). This all took place in the first half! The second half was a different story. Uthoff, the Big Ten?s leader scorer (19.6), scored only two points and the Hawkeyes blew a 20-point lead in a 83-82 loss that could haunt them on Selection Sunday.
Last week: 5

4. A.J. Hammons, Purdue. Purdue has two big tests this week, against Butler and Vanderbilt, and if it is going to stay undefeated, Hammons will have to continue his stellar play. He recorded his 18th career double-double with 15 points, 11 rebounds and three blocks in a laugher over Youngstown State.
Last week: 6

5. Caris LeVert, Michigan. Michigan saw its four-game losing streak snapped in a blowout loss at No. 19 SMU. LeVert was 1-13 from the floor with 5 points. He bounced back with 15 points and five assists in a blowout win against Delaware State.
Last week: 3

6. Nigel Hayes, Wisconsin. Hayes played the worst game of his career in a home loss against Marquette, finishing 4-18 from the field, including 1-6 from downtown. The junior is taking too many jumpers and needs to get more paint touches if the Badgers are going to turn their season around.
Last week: 4

7. Robert Carter Jr., Maryland. Carter Jr. continues to be a consistent force for the Terps. Unlike most big men, Carter has the ability to put the ball on the floor and attack defenses with the dribble. He pulled down an impressive 11 rebounds in Maryland?s statement win against UConn.
Last week: 8

8. Yogi Ferrell, Indiana. Ferrell and the Hoosiers will have plenty of opportunities for statement wins with the Big Ten season looming, but boy do they need a quality nonconference win against 7-2 Notre Dame this weekend in the Crossroads Classic. The senior guard has been really good in blowout home wins over inferior foes Morehead State, IPFW and McNeese State. He has to outplay talented Irish guard Demetrius Jackson if the Hoosiers want to quiet the doubters.
Last week: 7

9. Isaac Haas, Purdue. If Haas were playing heavier minutes, he would be a Big Ten Player of the Year candidate. Look for Haas, Hammons, and Swanigan to rough up Butler in front of a house full of NBA scouts in Indy.
Last week: 10

10. Caleb Swanigan, Purdue. Over his last three games, Swanigan has averaged 15 points and 10.3 rebounds, resulting in a pair of impressive double-doubles. He passed out a career-high six assists against Youngstown State, to boot.
Last week: NR