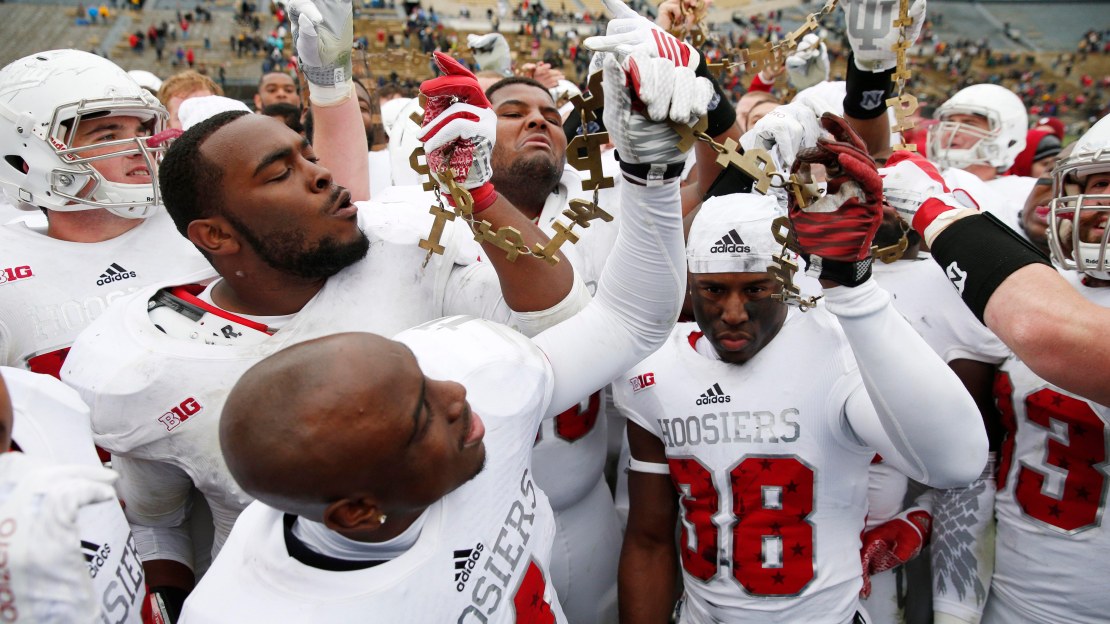 All hail undefeated Iowa! Again. But Michigan takes a slide and Indiana takes a rise in my latest Big Ten Power Rankings, presented by ArcelorMittal.

1. Iowa (12-0, 8-0). A perfect end to a perfect regular season. Only one other team (Clemson) won every game on its schedule. In Kirk we trust. Will this Cinderella story ever end?
Last week: 1
Up next: vs. Michigan State, Big Ten title game

2. Michigan State (11-1, 7-1). That is at least 11 wins five times in the last six seasons. Despite all of that awesomeness, this program still may be underrated.
Last week: 2
Up next: vs. Iowa, Big Ten title game

3. Ohio State (11-1, 7-1). The offense came alive a week too late. So, the Buckeyes are left wondering: What if? There will be no Big Ten title and perhaps no national championship for the reigning champs.
Last week: 3
Up next: Bowl game

5. Wisconsin (9-3, 6-2). The Badgers were so close to a really great season-a loss to Alabama and narrow losses vs. Iowa and Northwestern by a combined 10 points.
Last week: 6
Up next: Bowl game

6. Michigan (9-3, 6-2). Without a doubt, Jim Harbaugh has maxed out the talent and ability of this roster. But, there is still work to do.
Last week: 4
Up next: Bowl game

7. Penn State (7-5, 4-4). The Nittany Lions closed with three losses in a row, as Penn State failed to beat a Big Ten team with a winning record.
Last week: 7
Up next: Bowl game

10. Minnesota (5-7, 2-6). This has been a season to forget for many reasons. The Gophers wheezed across the finish line with four losses in six games.
Last week: 9
Up next: TBA

12. Rutgers (4-8, 1-7). The forgettable season comes to a merciful end with four losses in six games. And blowing a 31-13 halftime lead in the finale vs. Maryland stings. Now what?
Last week: 12
Up next: Season over

13. Maryland (3-7, 1-7). A dreary season ends with a bright spot, as the Terps end an eight-game losing skid with a comeback win at Rutgers. The search for a coach continues.
Last week: 13
Up next: Season over