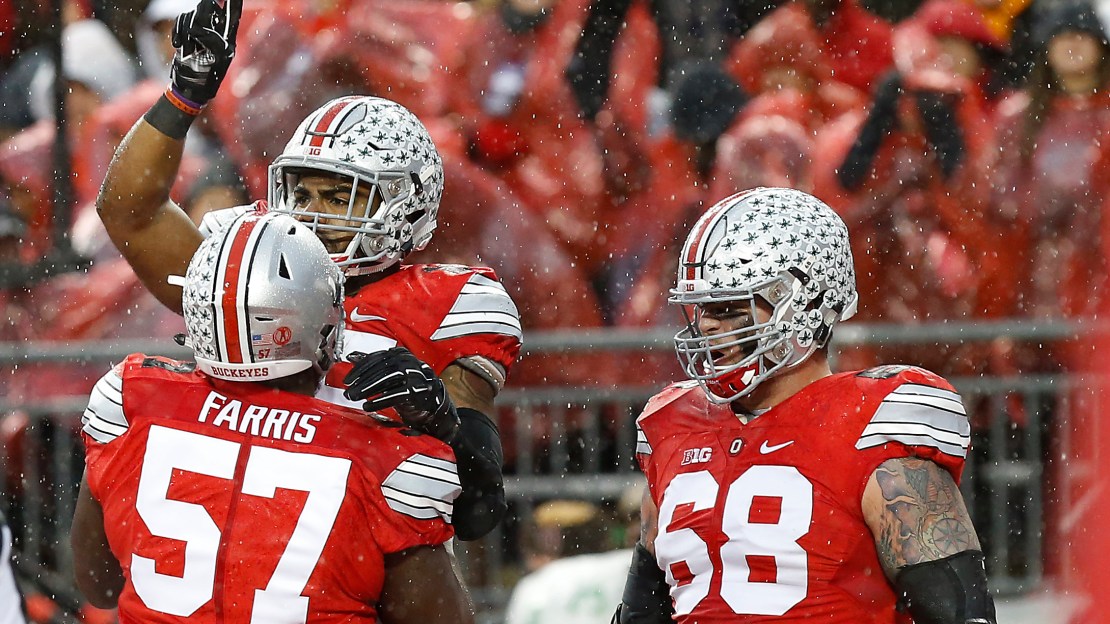 The final week of the Big Ten regular season is approaching.

With seven exciting games on the slate this week, there should be plenty of outstanding individual performances.

But who has been the most impressive Big Ten player thus far this season? After snapping a 15-game streak of 100-yard rushing games, does Ezekiel Elliott still top the list?

1. Ezekiel Elliott, RB, Ohio State. Yes, he had just 12 carries for 33 yards in the stupefying loss to Michigan State. And he then became a national story with his postgame rant. Still, Elliott is a special player who can make amends with a huge game in the Big House.

2. Aaron Burbridge, WR, Michigan State. He is the standard by which Big Ten wideouts are measured, leading the conference in receptions (69) and receiving yards (1,083). When the Spartans need a big play down the field, Burbridge is their man.

3. Desmond King, CB, Iowa. He is part of what some feel is the most physical secondary in Kirk Ferentz?s 17-year Iowa tenure, conjuring comparisons to legendary Hawkeye Bob Sanders. King leads the nation with eight interceptions and is third in the Big Ten in passes broken up with 18.

4. Nate Sudfeld, QB, Indiana. He has few peers in the Big Ten at his position, leading the league in passing efficiency and total offense. Sudfeld completes 60.5 percent of his attempts and has 2,834 yards passing with 20 TDs and five interceptions. Look for him to lead IU past Purdue and into a bowl.

5. Carl Nassib, DE, Penn State. He continues to set the tone off the edge, pacing the nation in sacks (15.5) and tackles for loss (19.5). Offenses must account for his whereabouts each play.

1. Ezekiel Elliott, RB, Ohio State. Elliott?s streak of 15 consecutive 100-yard rushing games is over. But it?s not easy to get 100-plus yards when you only get a mere 12 carries, which was the case with Elliott last week against Michigan State. Should Ohio State have given the Big Ten?s top back more carries? Yes, without a doubt. Did that warrant Elliott to go ahead and call out the play calling following the Buckeyes? 17-14 loss to the Spartans? No way. But the bottom line here is that whether Elliott is getting 12 carries or 30 carries, he?s still the top talent in the Big Ten, which is why he remains in the No. 1 spot on my list.

2. Desmond King, CB, Iowa. This guy continues to shoot up my rankings. Despite not recording an interception in the Hawkeyes? Week 12 win over Purdue, King is still tied for the NCAA-lead in picks with eight, which also ties an Iowa single-season record. Yes, King didn?t have an interception against the Boilermakers, but he was still dominant on defense, recording 11 tackles and a career-high three pass breakups in the win. Even better - 10 (yes, 10!) of King?s 11 stops were solo tackles. That?s amazing.

3. Connor Cook, QB, Michigan State. Yes, he didn?t play in the Spartans? impressive 17-14 win over Ohio State, but this list features the top players in the Big Ten this season, and it would be impossible for me to leave Cook outside of that conversation, even after missing a game. He still ranks first in the Big Ten in passing TDs (21), second in passing efficiency (143.0) and third in yards per game (248.2). Most importantly, he wins big-time games on big-time stages.

4. C.J. Beathard, QB, Iowa. It?s time to move Mr. Beathard into my rankings. He?s the leader of an undefeated Hawkeye football team, and he?s been playing some darn good football as of late as well. He ranks second in the conference among starting quarterbacks in accuracy, completing 61 percent of his passes. He can get it done with his arm and his legs, and all he does is win football games.

5. Nate Sudfeld, QB, Indiana. This guy gets my pick for the most underrated player in the Big Ten this season. Sudfeld leads the conference in passing yards with 2,834 and QB rating (149.1). He ranks second in TD passes with 20, trailing only Cook and Tommy Armstrong Jr., who each have 21. If this guy played on a better team, he could be sitting at the top of this list.