Best of Week 13: Ready for Urban Meyer vs. Jim Harbaugh, Part I? 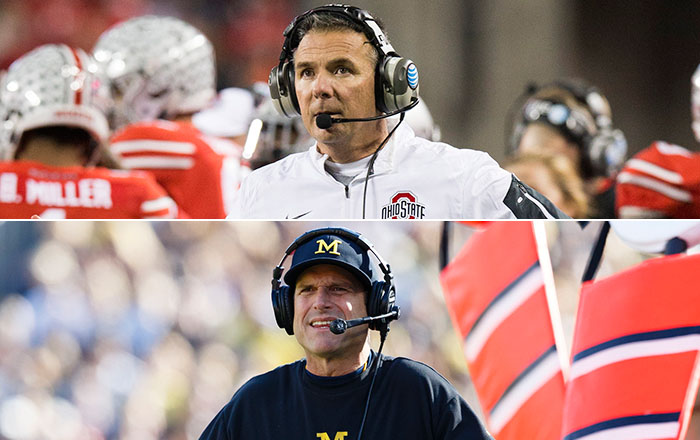 This is one of the most glorious weeks of the year: It?s rivalry week, with eclectic trophies and bragging rights up for grabs.

All eyes will be on Ann Arbor, Michigan, for ?The Game." In East Lansing, Michigan State can sew up the East by beating Penn State. And Iowa will look to remain perfect as it visits Nebraska. Also, four teams need to win to reach six victories and guaranteed bowl eligibility: Illinois, Indiana, Minnesota and Nebraska.

The Buckeyes have won 11 of the last 12 meetings vs. the Wolverines, with the only defeat coming in 2011 under Luke Fickell. You know Michigan will be sky high with this game in the Big House and it being Jim Harbaugh?s first crack at the Buckeyes.

BEST GAME: No. 8 Ohio State at No. 10 Michigan. The Iowa at Nebraska game on Friday drips with intrigue. The Hawkeyes are trying to remain unbeaten and on course for a possible playoff berth. The Cornhuskers need a sixth victory to assure bowl eligibility, though the team probably still would get a bid with a 5-7 mark. Having typed all of that, the Ohio State at Michigan game gets top billing. The winner will take the East pennant if Michigan State loses at home to Penn State. Regardless, the fact this is the first meeting between Urban Meyer and Jim Harbaugh is reason enough to pop some popcorn and buy a 12-pack of Diet Dr Pepper.

PLAYER ON THE SPOT: Ohio State RB Ezekiel Elliott. He made national news with his candid comments after the Buckeyes? stunning home loss to Michigan State last week. All has been smoothed over in the aftermath with Elliott?s apology (via social media, no less) and Urban Meyer?s decision not to discipline his superstar. But how will Elliott play? He already shockingly blurted he was going pro after this season as part of his post-game rant last Saturday. And what will be the mind-set of the team coming off a crushing loss that ended Ohio State?s unbeaten run and possible run to another national championship?

BEST MATCHUP: Penn State DE Carl Nassib vs. Michigan State OT Jack Conklin. Nassib leads the nation with 15.5 sacks and 19.5 tackles for loss. He may be a high-round draft choice. Conklin is hailed by some draft gurus as a future first-round draft choice-maybe a top-10 selection. What makes this matchup neat is the fact both of these guys arrived on campus as walk-ons. Incredible.

BEST QB MATCHUP: Iowa's C.J. Beathard vs. Nebraska's Tommy Armstrong. Since the status of Michigan State QB Connor Cook is murky, this has to be the pick. Beathard has been a revelation in his first season as a starter, bringing a vertical element to the offense along with some swagger. And, best of all, he has yet to lose a game as a starter in hitting 61 percent of his passes with 13 touchdowns and three picks. Armstrong is one of the Big Ten?s most explosive players, ranking No. 2 in total offense (283.8 ypg). But accuracy (54.7 percent) and decision-making (12 picks) are issues. Still, he is dangerous and talented.

That's a lot of touchdowns! pic.twitter.com/PDFcGZa4GT

BEST COACHING MATCHUP: Jim Harbaugh vs. Urban Meyer. Let?s hope this is the first of many meetings between these two, who already have drawn comparisons to Bo and Woody. Harbaugh has been to the Super Bowl. Meyer has won three national titles. It?s Harbaugh?s hat vs. Meyer?s windbreaker. This is why we love college football.

.@CoachJim4UM once guaranteed victory vs. OSU.

Will he treat the rivalry any differently as @umichfootball coach?
https://t.co/xQYnfTVmqU

BEST COORDINATOR MATCHUP: Iowa defensive coordinator Phil Parker vs. Nebraska offensive coordinator Danny Langsdorf. Parker?s defense is No. 5 in the Big Ten (322.5 ypg), while Langsdorf?s offense is No. 2 in the conference (443.4 ypg). The Huskers do most of their damage through the air, ranking No. 1 in the Big Ten in passing (272.7 ypg). The Hawkeyes are No. 8 vs. the pass (214.9 ypg) but pace the league with 13 picks. The battle between the talented Iowa secondary and the strong set of Husker wideouts will be good.

UPSET ALERT: Nebraska over No. 4 Iowa. Yes, Iowa is unbeaten, but don?t be shocked in Nebraska wins. This is a talented Cornhusker club that is better than its 5-6 record. Nebraska has suffered myriad tough losses, falling on a Hail Mary to BYU (33-28); in overtime at Miami (36-33); by one point at Illinois (14-13); by two points vs. Wisconsin (23-21) and Northwestern (30-28). And no one will soon forget the inglorious 55-45 defeat at Purdue. But the Cornhuskers have won two in a row and are coming off a bye. This is a very dangerous game for the Hawkeyes.

Eye test? @HawkeyeFootball passes that, and here's some proof. pic.twitter.com/VPYccOv6GB

Iowa and Nebraska play on ?Black Friday.? The Hawkeyes won the last time they visited Lincoln in 2013, taking a 38-17 verdict. Iowa blew a 24-7 third-quarter lead to the Huskers last year en route to losing in overtime, 37-34.

The Nittany Lions have lost the last two vs. Michigan State-both in State College. This will be Penn State?s first trip to East Lansing since 2009, when it won 42-14.

Minnesota and Wisconsin battle for Paul Bunyan?s Axe. The losing to the Badgers has to stop if the Golden Gophers want to get over the proverbial hump in the Big Ten food chain. Minnesota has lost 11 in a row to Wisconsin and has just two victories (2001 and 2003) vs. the Badgers since 1995, going 2-18 in the last 20 meetings.

Indiana visits Purdue with bowl eligibility and the Old Oaken Bucket on the line. The scales have tipped in this rivalry, with Purdue now looking up at the Hoosiers. The Boilermakers have lost two in a row to the Hoosiers-both in Bloomington. The last time IU beat Purdue three times in a row was when the Hoosiers had a four-game winning streak from 1944-47. The teams haven?t met in West Lafayette since 2012, the last time Purdue won the Old Oaken Bucket. If Purdue keeps losing to Indiana, it has little chance to become relevant in the Big Ten.

Maryland?s trip to Rutgers is all about pride. The Scarlet Knights pulled off a monster comeback last season vs. the Terps, rallying from a 35-10 second-quarter deficit to take a 41-38 win in College Park, Md. These teams will be measured vs. each other for some time, as each entered the Big Ten together.