Big Ten Mailbag: How about what Michigan QB Jake Rudock is doing? 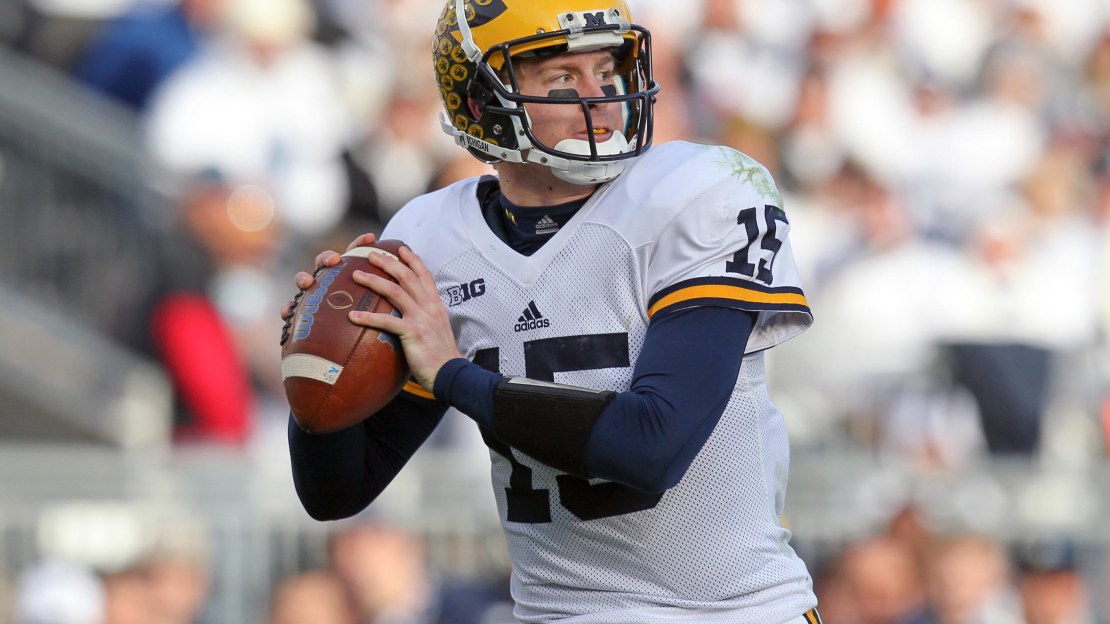 You have questions, and I have answers in my weekly Big Ten Mailbag. Once again, there's lots of interest about Iowa and its magical season. And how about Michigan and quarterback Jake Rudock?

Get my answers to your latest questions below:

I have touting Michigan for a while. To think this program went 5-7 last year and lost to the like of Rutgers and Maryland in 2014 and is now poised to maybe win the Big Ten East with the right breaks is remarkable. Take away that goofy home loss to Michigan State, and the Wolverines are in the driver?s seat in the East. It is amazing how Jim Harbaugh has flipped the attitude of this program. Michigan won?t beat itself, as it?s a well-coached team that just needs more talent.

As for Rudock, yes, few expected him to be one of the Big Ten's top signal-callers, let alone set the program record for touchdown passes in a single game (6) and become the first Wolverine to throw for 250-plus yards in three consecutive games in back-to-back weeks. It's unbelievable, really.

Not much love for Iowa this week. What has happened to change your tune? If Iowa goes 12-0, why wouldn't Ferentz make coach of the year? – Tim Nedoba

Not much love for Iowa? I have been tooting the Hawkeyes? horn for a while. I think without a doubt that Ferentz will be the Big Ten Coach of the Year. I was just saying in my Power Rankings that I think Michigan?s Jim Harbaugh deserves some love, too, for what he is accomplishing.

No one felt back in August that the Wolverines would enter the final weekend with a shot to win the Big Ten East. But, here we are-and there they are.

Not a question, just a comment on your statement that Michigan State has two great wins at Michigan and at Ohio State and its only loss was on "fluke" play at Nebraska. Well, Tom, the Spartans? win at Michigan was on a "fluke" play, as well. – Scott

Good point. In fact, the botched punt/TD for the Spartans at Ann Arbor was one of the flukiest things I ever have seen. The football gods taketh (at Nebraska) and giveth (at Michigan) for MSU. What a crazy season it has been for Michigan State. What?s amazing about the Spartans? wins at Michigan and at Ohio State is the fact they never lead at any point in either game ? until the final gun.

What is your bowl prediction for MSU now that it beat Ohio State? – Dennis Naughton

Why not give credit to the Spartan defense instead of what OSU's offense couldn't do? – Stanley

Good point. We focused almost exclusively on what the Buckeye offense didn?t do vs. the Spartans. But, as you say, the MSU defense played a role in Ohio State?s struggles-especially along the line, where the Spartan front dominated the Buckeye o-line. The 132 yards by Ohio State were the fewest ever by an Urban Meyer-coached team. Amazing.

Is it true that Ohio State can go to the Big Ten championship game if it beats Michigan AND Penn State beats Michigan State next Saturday? – Lisa Stripe

Yes, that is true.

Who is the favorite to win the Heisman? It seems like a murky race. – Joe

No doubt, it is as muddled as I have seen it in years. LSU?s Leonard Fournette and Ohio State?s Ezekiel Elliott are out. So is TCU's Trevone Boykin. Oklahoma?s Baker Mayfield? Maybe, but he got dinged last week. Is he OK? I think the leader may be Alabama RB Derrick Henry.

Does Iowa have any chance to win Friday at Nebraska? Only five days to prepare vs. two weeks for the Huskers. Hard to overcome a letdown after an emotional Senior Day. – Boyd Tracy

Oh ye-of-little-faith. Yes, Iowa can win on Friday. Two reasons: 1. Defense. 2. Running game. The balanced Hawkeye offense should have success vs. a Nebraska defense that has been spotty-especially vs. the pass. But Iowa may have to score over 30 points to win this game. It should be fun.