What did Tom Dienhart learn about Big Ten in Week 12? Find out here! 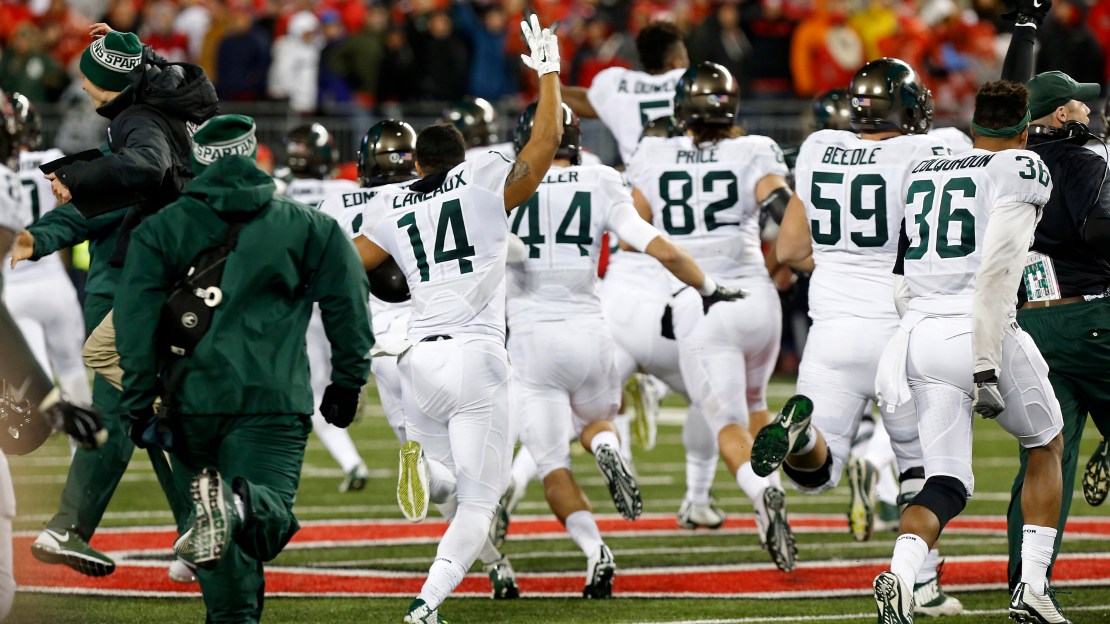 This Saturday taught me a few things ? like, never give up on Indiana. I also was reminded once again what a great coach Mark Dantonio is. And how about those Iowa Hawkeyes?!

See 10 things I learned, in no particular order, from Week 12 action below.

1. A good case can be made for the Big Ten to have two teams in this week?s College Football Playoff poll. Clemson and Alabama figure to top the poll. But arguments can be made for Iowa and Michigan State to be Nos. 3 and 4 over one-loss Notre Dame and Oklahoma teams. The Hawkeyes pass the eyeball test and are unbeaten. The Spartans have some of the best wins in America, taking down Oregon along with Michigan and Ohio State on the road and its only loss (at Nebraska) was fluky.

2. It?s all right there for the taking for Michigan State. Beat visiting Penn State next week, and the Spartans will advance to their third Big Ten championship game in the five years the game has been in existence. Not bad. The first two foes were Wisconsin and Ohio State. This time, the opponent would be Iowa.

3. While the Ohio State staff will come under scrutiny, the Michigan State staff should take a bow. Mark Dantonio and company did a masterful job in the 17-14 win at Columbus. To think the Spartans could come into the Horseshoe and beat an unbeaten OSU team with without injured star QB Connor Cook is remarkable. Michigan State maxed out the abilities of backup signal-callers Tyler O?Connor and Damion Terry, who combined to hit 8-of-16 passes for 91 yards with a TD and no picks. And the running game churned out 203 yards, 50 of which came via the quarterbacks, while the defense allowed only 132.

Sunday Ruminations #Spartans - Can't remember a better coaching job for one game - another coaching clinic coming out of East Lansing.

4. Ohio State and Michigan still have hope to win the East. The rivals meet in Ann Arbor on Saturday, and the winner of the game will need Penn State to topple Michigan State in East Lansing. Hey, it could happen-crazier things have occurred, like Michigan State?s win in Columbus with its all-time greatest quarterback out with injury.

5. I sure hope Ezekiel Elliott doesn?t regret his harsh critique and frank words. The star running back bashed his coaching staff and made it know that it was his last home in the aftermath of Ohio State?s tough home loss to Michigan State. The defeat was disappointing as it cost the Buckeyes their unbeaten season and the chance to control their destiny in the Big Ten East and the College Football Playoff. It is easy to see why he would be extra frustrated, too, with getting only 12 carries for 33 yards. But that?s no excuse for going public with your complaints.

6. What a difference a year makes in Iowa City. Last year, Iowa fans were rankled with the football program coming off a 7-6 season that inspired few. Now, the Hawkeyes are headed to Indianapolis for the Big Ten title game as an unbeaten team with a chance to maybe earn a playoff spot. Not bad for a program no one picked to win the Big Ten West.

7. Beware Nebraska. This is meant for you, Iowa. The Hawkeyes close the regular season at Nebraska on Black Friday. Yes, Iowa is hot, riding an 11-0 mark. But the Cornhuskers are dangerous. This team has won two in a row and was off last week. The Huskers are confident and rested-and you know they?d love to ruin Iowa?s unbeaten run and shot at making the playoffs.

8. Big Ten coach of the year is between Jim Harbaugh and Kirk Ferentz. I think Ferentz will win it, but Harbaugh can make a heck of a case. He took over a 5-7 team that finished fourth in the Big Ten East and lost to Maryland and Rutgers, among others. Now, the Wolverines are 9-2 overall and 6-1 in the Big Ten and still with a chance to win the school?s first conference championship since 2004. Amazing. Also amazing: The work Harbaugh has done to help turn Jake Rudock into one of the Big Ten's top quarterbacks. Yes, very strong cases can be made for Mark Dantonio and Pat Fitzgerald, too.

9. Northwestern is very resourceful. The Wildcats won a nail-biter at Wisconsin, 13-7. It is yet another close victory for NU, which has now won its last four games by a total of 17 points. The Cats have won five games by seven points or less in 2015. NU was 4-8 in games decided by eight points or fewer in the previous two seasons.

10. Kevin Wilson and Indiana are still dangerous. We already knew this, actually. Just ask Ohio State, Michigan State and Michigan, top 15 teams that all struggled vs. the Hoosiers earlier this season. Still, it's nice to know this competitive team hasn't quit following its frustrating six-game losing streak to open Big Ten play. It easily could have quit after falling behind Maryland, 21-3, but the Hoosiers went on to outscore the Terrapins 44-7 the rest of the way. Now, the Hoosiers are just one victory from bowl eligibility for the first time since 2007. The only remaining hurdle: a trip to Purdue next Saturday. IU has downed the Boilermakers the last two seasons. The last time the Hoosiers beat Purdue more than twice in a row was a four-game run from 1944-47.