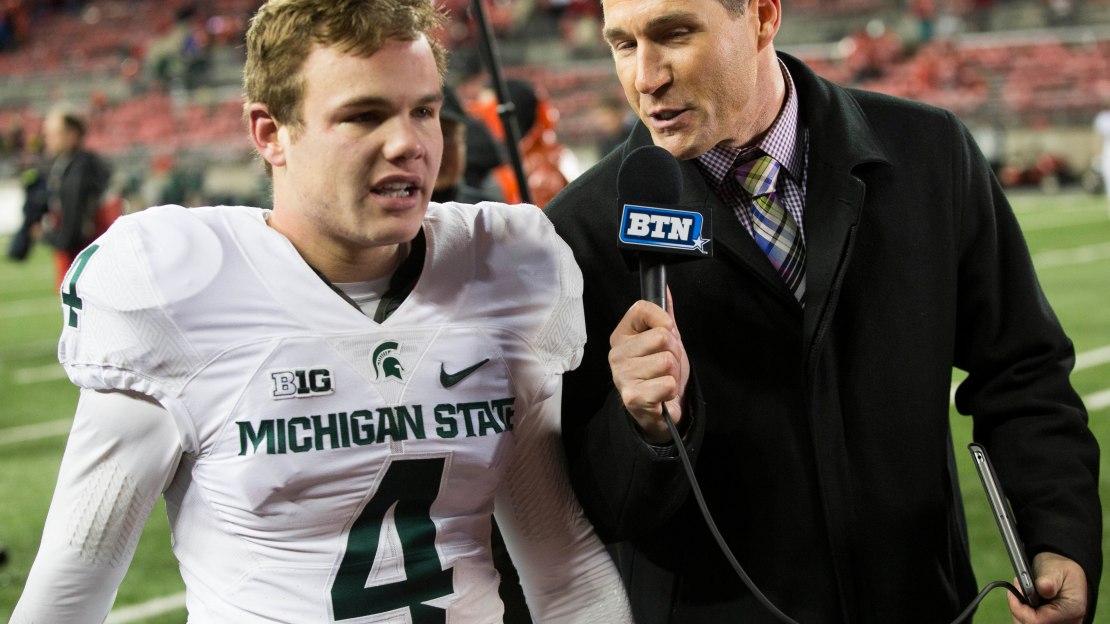 The biggest game lived up to its hype, with No. 9 Michigan State leaving No. 3 Ohio State with a huge last-second win that sets it up to win the East and advance to the program?s third Big Ten title game.

And how about Iowa, the freshly minted Big Ten West champ?!

Here is a look at another wild Saturday in the Big Ten.

Biggest surprise: Michigan State, playing without starting quarterback Connor Cook, waltzed into Ohio Stadium and left with a stunning 17-14 win to knock the Buckeyes from the ranks of the unbeaten and keep itself in control of its destiny to win the Big Ten East and perhaps nab a playoff spot.

Biggest disappointment: Wisconsin. The Badgers had five turnovers and three TDs overturned in a tough 13-7 home loss to Northwestern. The defeat ended a five-game winning streak for the Badgers. NU had last won in Madison in 2000.

ICYMI: This was a gigantic play in the @NUFBFamily-@BadgerFootball game. Was it the right call? https://t.co/y3mUWPuw3g

Play this again: The Northwestern at Wisconsin was interesting, but let?s go with Michigan State?s win at Ohio State, which saw a national-best 23-game winning streak end and run of 30 consecutive Big Ten regular-season triumphs cease on a last-second field goal.

Never play this again: Iowa 40, Purdue 20. Yes, the Boilermakers made it interesting for a while. But, this script played out like we thought it would-a lopsided win for the Hawkeyes, who wrapped up the Big Ten West with the victory. Not bad for a program no one picked to win the West back in the preseason. Iowa is going to the Big Ten title game for the first time.

Best play: Kevin Wilson is not afraid to do something risky, something outside the box. For example, attempt a sneak onside kick not even a minute into the second quarter. It worked, and Indiana recovered it with absolute ease.

Best quote: Rick Pizzo caught up with Michigan State kicker Michael Geiger on his way off the field, and the Toledo, Ohio, native said, "I've been waiting my whole life to beat that team in this stadium."

Did you see this? Wisconsin star linebacker Vince Biegel is a big-play player, and he showed it on a sack of Clayton Thorson. After the sack, Biegel got up and celebrated with his teammates, even attempting to high-5 one of the referees during the jubilation.

Classic: Vince Biegel gets the @BadgerFootball sack and tries to high-five the ref. https://t.co/CchZ7JOcdu

Michigan State. The shocking win at Ohio State keeps the Spartans in control of their destiny in the Big Ten East with a chance to make the playoffs if they win out vs. Penn State and in the Big Ten title game vs. Iowa. Making the victory even more improbable and sweet is the fact the Spartans pulled it off without injured star QB Connor Cook.

Iowa. The win vs. Purdue stamps the Hawkeyes? ticket to the Big Ten championship game, keeping alive league championship and playoff hopes. Not bad for a team not picked to even compete in the West. Iowa last won the Big Ten in 2004.

Indiana. The Hoosiers fell behind Maryland, 21-3, but rallied for a 47-28 victory to move one win from bowl eligibility and end a six-game losing skid. Up next: a trip to Purdue. IU, which has given Ohio State, Michigan State and Michigan fits this season, is looking to win the Old Oaken Bucket three times in a row for the first time since a four-win run from 1944-47.

Minnesota. The Gophers ended a four-game losing streak with a 32-23 win vs. Illinois, giving Tracy Claeys his first victory. Minnesota needs to win vs. Wisconsin next week to reach six victories.

Once again, Shannon Brooks is really good. This @GopherFootball RB is going to be fun to watch for years to come. https://t.co/Y5LTXeJ41U

Michigan. The beat goes on for the Wolverines, who dumped Penn State in State College, Pennsylvania, and Jake Rudock, who is playing as well as any quarterback in the Big Ten.

Ohio State. The unbeaten season is over and perhaps a chance to defend their national championship, too, with the loss at home to Michigan State. On top of all that, star running back Ezekiel Elliott was very vocal in his postgame critique, also saying that he will be going pro.

Illinois. The Ioss at Minnesota means the Fighting Illini are still a win from bowl eligibility. That is five losses in six games. The last game: vs. Northwestern in Soldier Field in Chicago.

Maryland. That?s eight losses in a row after a 2-1 start. Enough said.

Minnesota LB De'Vondre Campbell totaled 10 tackles, including a tackle for a loss, and a forced fumble.

Rutgers running back Josh Hicks, who made the switch to defense at Army, had six tackles, a fumble recovery and the game-sealing interception.

-26, yards rushing on 26 carries for Wisconsin, which was sacked six times.

44, Indiana scored 44 of the final 51 points after falling behind 21-3 to rally for the win at Maryland.

0, turnovers for Maryland, which leads the Big Ten. Alas, the Terps still lost.

412, combined yards for Northwestern and Wisconsin.

23, Ohio State winning streak that is now over.