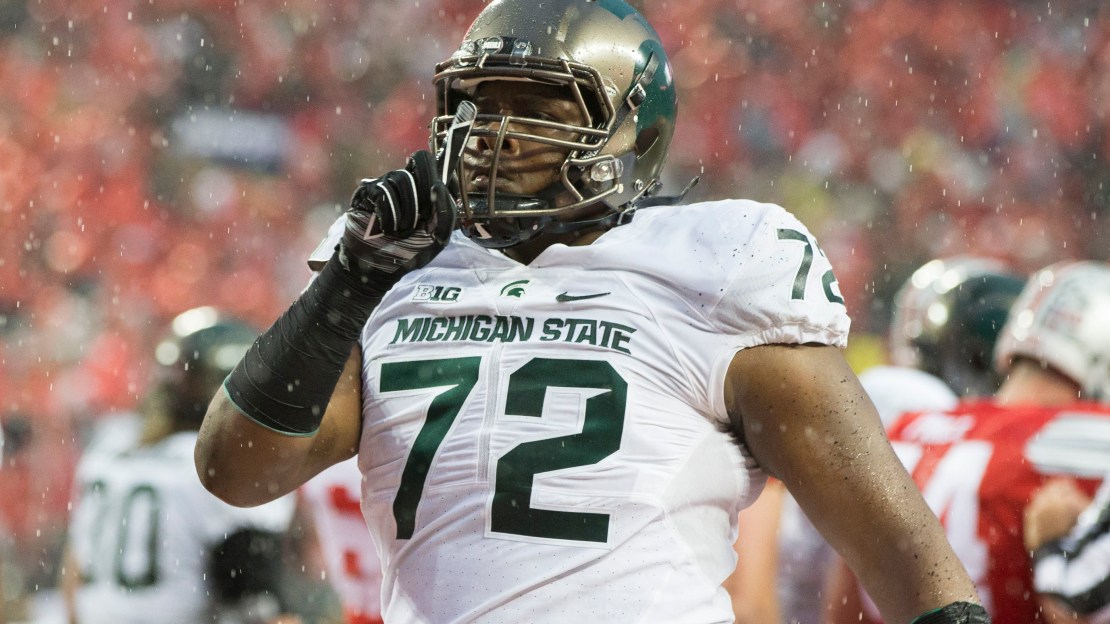 COLUMBUS, Ohio - A stunned silence enveloped Ohio Stadium as the ball ripped through a swirling wind and the uprights. It was over for Ohio State. Just like that.

Bang, bang, bang. All over-along with perhaps Big Ten and playoff hopes–as the ball left the toe of Michigan State kicker Michael Geiger for a 41-yard field goal to give the Spartans a 17-14 win over Ohio State as time expired.

"The one thing that made a difference … this game we got to be the chaser," Spartans coach Mark Dantonio said. "So we could chase this game, so we could play with emotion."

Lots of emotions, lots of passion, lots of heart. It was perfect MSU as we have come to know the program under Dantonio.

Michigan State?s dream of making the playoffs is starting to take shape. The dream was there back in August but never really came into focus all season ? until today. Now, it seems tangible and real: Beat visiting Penn State next week, and the Spartans will win the Big Ten East and take on Big Ten West champ Iowa in the league title game on Dec. 5 in Indianapolis. It would be the Spartans? third trip to the Big Ten title game. MSU lost the inaugural Big Ten title game to Wisconsin in 2011 and beat Ohio State in 2013.

And what makes the Spartans? win today all the more remarkable is they did it without QB Connor Cook, who missed the game after suffering a shoulder injury last week vs. Maryland. Arguably the greatest quarterback in school annals, Cook dressed and tried to play ? but couldn?t. There was no panic from the Spartans. Only a great plan, as the staff cobbled together a workable script for little-used signal-callers Tyler O?Connor and Damion Terry.

Conversely, all game, the Buckeyes struggled to move the ball despite having a full arsenal of players: J.T. Barrett, Ezekiel Elliott, Jalin Marshall, Michael Thomas and a roster full of stud, blue-chip talent to go along with a veteran line. But, in the end, Ohio State could muster just 132 yards of offense and 14 points, with one TD set up off a muffed punt return by Michigan State that resulted in a one-play, six-yard TD ?drive.?

The big story: Michigan State rendering Elliott a non-factor, as he had 12 carries for 33 yards with a touchdown. His long run? Seven yards. Elliott entered today with a Big Ten-high 1,425 yards rushing (142.5 ypg). He had rushed for 100 yards in 15 games in a row. That streak is over ? and so are any Heisman hopes for Elliott. Was this the junior?s last game in Ohio Stadium?

"This is my last game in The 'Shoe,? he huffed afterward. ?There's no chance I'm coming back."

Asked after the game if Elliott was healthy and fine, Meyer said he was after dealing with a leg infection that required hospitalization and fever this week. So, what exactly was the issue for Ohio State?s offense? Was it the play-calling? Was Meyer happy with it a year after last season?s offensive coordinator Tom Herman bolted to take the Houston job?

?No, I wasn?t,? said Meyer, who suffered just his fourth loss in four seasons in Columbus and first in the regular season. The other Big Ten loss for Meyer? It was to Dantonio and MSU in the aforementioned 2013 Big Ten title game.

Elliott was rankled in the postgame aftermath, saying ?we weren?t put in position to win this game.? He said he lobbied Meyer for calls and did not get them.

"I deserve more than 11 carries,? Elliott said. ?I really do. I can't speak for the play caller. I don't know what was going on."

"That's a team (Michigan State) we should beat," he said.

Meanwhile, over on the Michigan State side, there was no post-game soul-searching and harsh critiques ? there was just jubilation. Like Ohio State, the Spartans never really have taken off in 2015. It has been attributed to rampant injuries, especially along the offensive line and in the secondary. Still, Michigan State fought through the adversity all season and is just a controversial call at Nebraska from being unbeaten. Amazing. Take a bow, Dantonio.

The 13-point underdog Spartans patched together 294 yards with their O?Connor-Terry QB duo, having several long, sustained drives-including the 13-play, 75-yard effort that led to a two-yard Gerald Holmes run that tied the game at 14 early in the fourth quarter.

?I was going to manage the game,? said O?Connor, who led a nine-play, 25-yard drive that led to the winning field goal. ?From the very beginning, we were going to give the ball to the running backs and let the offensive line dominate.?

Don?t you wonder if things may have gone differently had Barrett been the quarterback all season? Instead, Cardale Jones started most of the season, with Barrett seeing spot duty until recently winning the job-then getting suspended for a game for an off-field arrest. He never really got in a groove-just like the entire Ohio State team.

Ohio State now must hope for some craziness to get back in the playoff chase. But first, the Buckeyes must go to Michigan next week to play a strong Wolverines squad coached by maniacal Jim Harbaugh, who no doubt wants his first taste of ?The Game? to be a memorable one. You know he would love to pile onto Ohio State?s misery. The Buckeyes must not only beat Michigan ? but also hope the Spartans lose at home on Senior Day to a Penn State squad that time and again has come up short vs. superior teams.

?We have to start finding a way to complete a pass and beat our rival,? Meyer said. ?(Thinking about the playoffs), that?s certainly not any conversation ? a lot of things happen, but we?ve gotta fix some obvious problems.?

Fast-before the season slips away even farther.