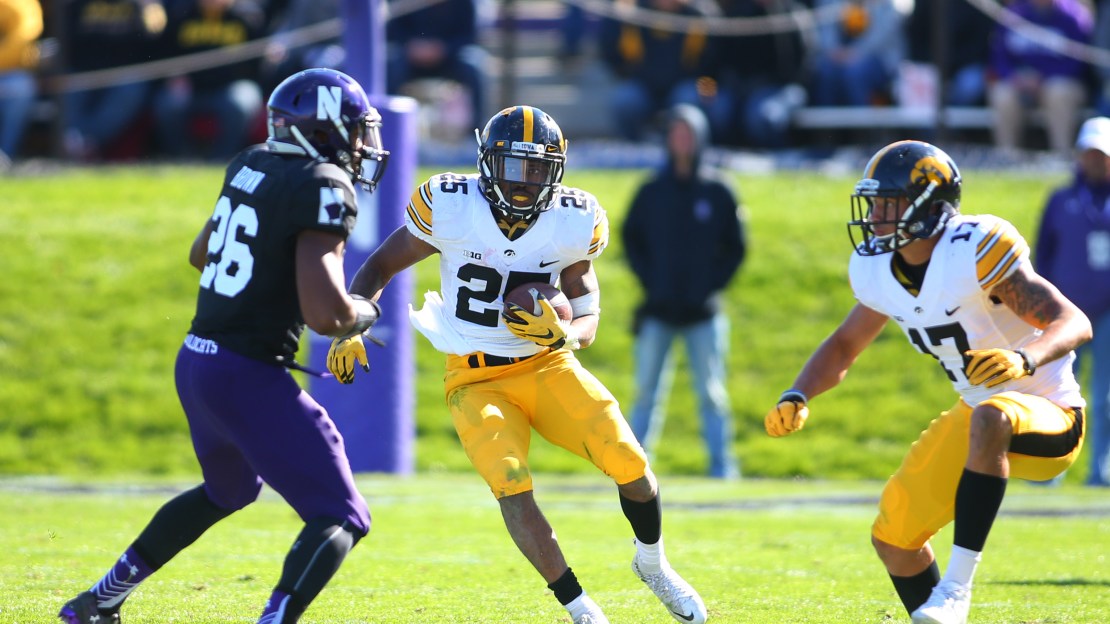 What a fun day of Big Ten football!

There were a ton of outstanding individual performances on Saturday, highlighted by five standout Big Ten quarterbacks.

Who was the most impressive?

Well, that?s what I?m here to tell you!

Here is a look at my top performers from Saturday?s Week 7 Big Ten football action.

Akrum Wadley, RB, Iowa. With starting running back Jordan Canzeri sidelined in the first quarter with an ankle injury, Wadley stepped in and was dominant in Iowa's 40-10 victory over Northwestern. The Hawkeyes' back rushed for 204 yards and tied a school record with four rushing touchdowns to lead No. 17 Iowa to the win.

Nate Sudfeld, QB, Indiana. Sudfeld was phenomenal on Saturday. The Hoosiers' senior quarterback threw for 464 yards, the second highest total in school history, and four touchdowns in Indiana's 55-52 loss to Rutgers. Sudfeld is now tied for second in school history with 45 touchdown passes. What a special talent.

Lenote Carroo, WR, Rutgers. Another Rutgers player on this list? You bet! Carroo was Laviano's top target again this week, hauling in seven passes for a career-high 157 yards and three scores. He now has nine touchdowns in four games. That's incredible.

T.J. Edwards, LB, Wisconsin. Another week, another outstanding individual performance from a Wisconsin linebacker. This week, it was Edwards who had a standout game for the Badgers. He recorded a career-high 16 tackles and forced a fumble in Wisconsin's 24-7 win over Purdue.

Tommy Armstrong Jr., QB, Nebraska. Armstrong bounced back from back-to-back poor performances with an outstanding game on Saturday. The Huskers' QB passed for 261 yards and three scores in a 48-25 win over Minnesota. Armstrong also added 38 rushing yards in the win.

J.T. Barrett, QB, Ohio State. I think the Buckeyes have found their answer at quarterback. Barrett was incredible in Ohio State's commanding 38-10 win over Penn State on Saturday. He completed all four of his passes for 30 yards and two touchdowns. He also rushed for 102 yards and two more scores in the victory.

Ezekiel Elliott, RB, Ohio State. Elliott was outstanding once again for the Buckeyes, rushing for 153 yards and a touchdown in the Buckeyes' 38-10 victory. Elliott has now topped the 100-yard rushing mark in 12 straight games. That's impressive!

Connor Cook, QB, Michigan State. Cook was impressive in Michigan State's incredible 27-23 win over in-state rival Michigan. The senior QB totaled 328 yards and a TD against the nation's top-rated defense. With the victory, Cook improves to 30-3 as a starter.

Saquon Barkley, RB, Penn State. When the ball is in Barkley's hands, good things happen for Penn State. The true freshman back carried the ball 26 times for an eye-popping 194 yards in the Nittany Lions' 38-10 loss to Ohio State. Barkley has now topped the 190-yard mark on two separate occasions this year.