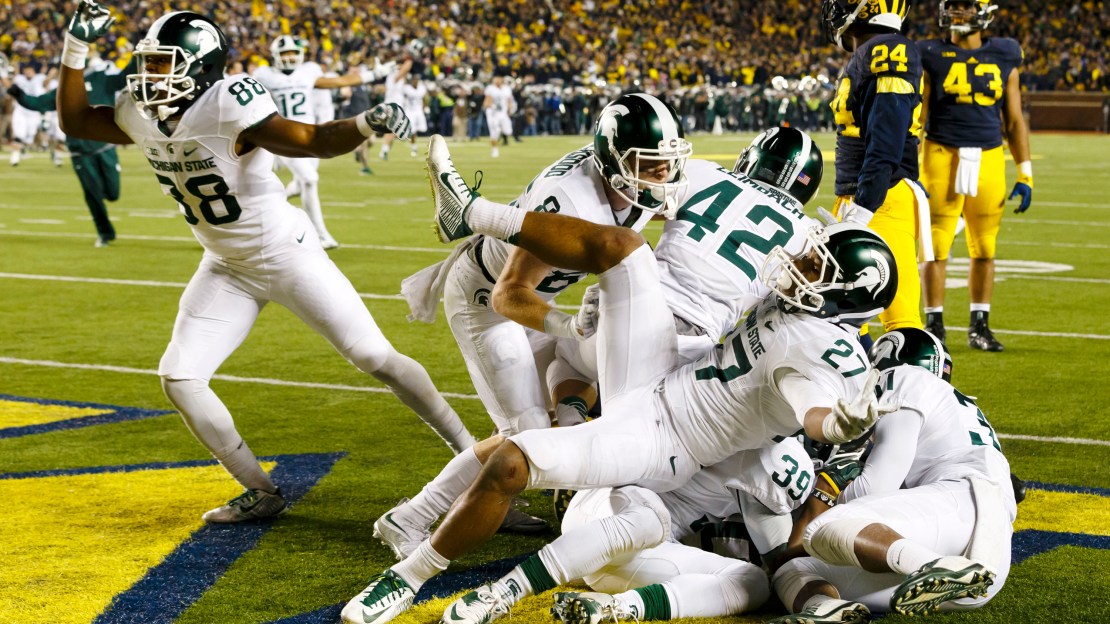 Those were Jim Harbaugh?s words. And, he was correct in his somber post-game analysis. His Michigan Wolverines played winning football on this cold night. They deserved to win. But, they didn?t win. In one of the all-time oh-my-gosh-I-can?t-believe-it endings in the history of college football, Michigan State escaped Michigan with a 27-23 win that can be dubbed ?The Blunder in the Big House.?

No need to, Coach. Just enjoy this gift from the football gods.

Your thoughts on that wild, stunning, you name the adjective, finish, @MSU_Football coach @DantonioMark? http://t.co/siqVA1MeMv

The Spartans have sprinted back home to East Lansing before officials could conduct yet another review on a night filled with them. This breath-stealing ending that saw Michigan punter Blake O?Neill turn a bobbled snap into a Michigan State touchdown has made tonight?s game an instant classic and forever a part of college football lore.

All O?Neill had to do was punt the ball-and game over. Michigan wins, 23-21, and the Michigan-Harbaugh honeymoon roars on for another week. Ten seconds hung on the clock after a Wolverine timeout. It was 4th-and-two at the MSU 47-yard line.

That?s when the inexplicable happened: O?Neill bobbled a low snap ? then tried to hurry his punt. He was hit and the ball ricocheted to the right and into the arms of MSU DB Jalen Watts-Jackson, who sprinted to the end zone and immortality.

You never heard a quieter 111,740 fans in your life as Spartans spilled onto the field to celebrate with suddenly famous Watts-Jackson, who unfortunately injured his hip in the celebration.

"If you go for it, you leave them with a Hail Mary opportunity," Harbaugh said. "We could protect and throw a long pass. We ran through the scenarios and felt like the best decision was to punt. They didn't have any returners. It was a matter of punting it. We messed up."

It was the only time MSU had the lead all game. In fact, things looked bleak after the Wolverines took a 23-14 lead with 9:25 left in the game. But the Spartans kept fighting.

– Auburn running back a missed Alabama field goal 100 yards for the winning TD in the Iron Bowl in 2013.

– NFL zaniness is measured by the 1978 ?Miracle at the Meadowlands? in which Giants QB Joe Pisarcik inexplicably fumbled trying to hand off to Larry Csonka while trying to kill the clock only to see the Eagles Herman Edwards scoop it up and score the winning points.

And, more at home: Colorado?s Kordell Stewart hitting Michael Westbrook with a game-winning 64-yard pass as time expired in this same very Big House vs. these same very Wolverines in 1994.

Michigan has no choice. This defeat ends the Wolverines? five-game winning streak and taps the brakes on the ?Harbaugh Hype Express.? At least for five minutes. But it does nothing to diminish what Harbaugh is building in Ann Arbor, a rehab project that is way ahead of schedule.

The Wolverines no longer control their own destiny in the Big Ten East, looking up at Ohio State and Michigan State. Michigan will need help to reach the Big Ten summit.

Michigan State can keep dreaming big after this stupefying result. The Spartans are 7-0, pushing toward a huge showdown at Ohio State on Nov. 21. But a trip to Nebraska on Nov. 7 could be dicey. This has been a strange season in East Lansing, as MSU hasn?t looked as dominating as many envisioned it would be this year. Injuries have played a big part in what often can be described as lackluster play in 2015. But, the Spartans find a way to win each week. And, that?s all that matters.

But let?s allow MSU a chance to revel in this glorious victory. Michigan had shutout its last three foes, but the Spartans found a way to scratch out 386 yards vs. the No. 1 total defense in the Big Ten (181.3) and 27 points vs. the No. 1 scoring defense (6.3 ppg).

Most of that damage today was done by QB Connor Cook, as neither team got much traction on the ground. The Spartans had 58 yards rushing (1.8 ypc). The Wolverines managed 62 (1.9 ypc). But Cook outplayed counterpart Jake Rudock, completing 18-of-39 passes for 328 yards with a TD. Rudock hit 15-of-25 for 168 yards.

Michigan had hopes to flip the script in what had become a lopsided rivalry that had seen Michigan State win six of the last seven meetings. And, frankly, it was getting ugly in recent years. In 2013, MSU won, 29-6, holding the Wolverines to 168 yards and a stunning minus-48 yards rushing. Last year in a 35-11 Spartan win, the Wolverines were limited to 186 yards with 61 coming on the ground. MSU still owns this rivalry–at least for another delicious year. For Spartans fans, coffee will taste better … bosses will seem nicer … mother-in-laws will seem more tolerable … And Michigan fans will have to endure the taunts of MSU from across the cul-de-sac for the next 365 days.

This year?s result announces the return of this rivalry in the mitten state. And, that?s a good thing for the Big Ten and college football.

No doubt, Hoke left Harbaugh with a pretty loaded cupboard. Some Michigan watchers compare it to when Bo Schembechler took over from Bump Elliott in 1969. Like Harbaugh, Schembechler inherited a lot of talent from his predecessor. Bo was off and running, going 8-3 overall and 6-1 in the Big Ten in his debut in 1969, winning the first of 13 Big Ten championships in 21 seasons prowling the sidelines of the Big House.

A Big Ten title probably won?t be in the offing for Michigan in Harbaugh?s debut. But Michigan State just moved a step closer on a ?where-were-you-when-Michigan-botched-the-punt? night no one soon will forget.