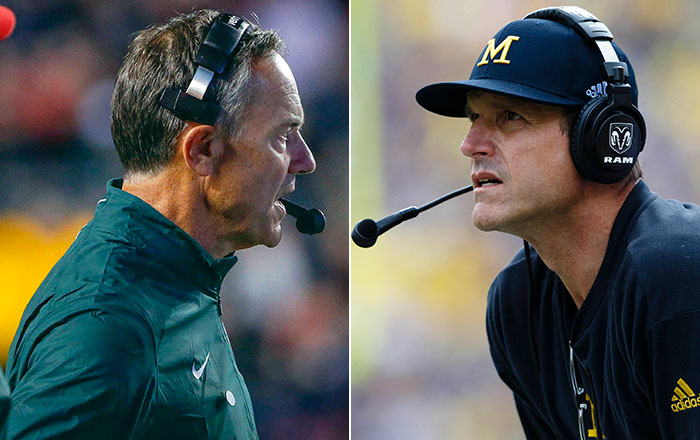 It?s that time of the week when I reach into my Big Ten Mailbag, fish out some provocative letters and answer them. Let?s go!

See my answers to your questions below!

I am a die-hard Iowa fan and feel that we are fairly assessed as far as the rankings go. The only thing I question: How are we not ranked higher than Michigan State? Not complaining but just trying to figure that one out.- Jon Nelson

Iowa is No. 17 in both polls; Michigan State is No. 7 in the AP and No. 4 in the coaches. I see your point. The 6-0 Hawkeyes? resume is every bit as good-if not better-than the 6-0 Spartans?. Iowa has beaten Illinois State, Iowa State  (road), Pitt, North Texas, Wisconsin (road) and Illinois. MSU has toppled Western Michigan (road), Oregon, Air Force, Central Michigan, Purdue and Rutgers (road). Who am I kidding? Iowa has done more than the Spartans this year-and probably should be ranked higher, however the polls always favor the teams that were ranked higher in the preseason, especially if they haven't lost. But, don?t sweat it. If the Hawkeyes keep winning, things will take care of themselves. In fact, if Iowa wins at Northwestern this week, it may have a legit shot to go 12-0. Really.

Got to like undefeated @HawkeyeFootball's chances in the #B1G West. pic.twitter.com/HrhD4o7PXY

See what I mean?

Do you think it?s fair to start thinking of running back Shannon Brooks as the future for the Minnesota offense? He nearly destroyed Purdue on his own and looked miles better than the Gophers other backs. – Travis Fawver

Brooks was very impressive, true freshman or not, ripping through Purdue for 176 yards rushing. His 71-yard scoring jaunt was a gem. The Boilermakers wanted NO PART in tackling him. But, again, it was Purdue. Brooks will face much better defenses. Still, it was an impressive effort and his future looks bright. With redshirt freshman Rodney Smith in the mix, too, the Gophers have a nice set of young backs.

Ohio State hasn't played one ranked team. Yet, they are ranked No. 1 despite not dominating. Michigan has shutout teams in a row-two of them were ranked (BYU and Northwestern). How aren't the Wolverines the team to beat in the Big Ten? – Dustin

You certainly can make a case for Michigan being the team to beat in the league. No one?s resume glistens like the Wolverines?. Wins over BYU and Northwestern have been impressive. And Michigan challenged a very strong Utah squad, now ranked No. 4 by the AP, on its home field before losing by a touchdown. If Michigan beats visiting Michigan State this week, it would be hard to rank OSU over the Wolverines, wouldn?t it?

How good has @umichfootball's defense been this season? Here's your answer! pic.twitter.com/877zZop6TL

The Huskers are 2-4 with six games to play, meaning they must go no worse than 4-2 the rest of the way.

Let?s have a look:

At Minnesota
Northwestern
At Purdue
Michigan State
At Rutgers
Iowa

I?ll be honest with you: I think Nebraska can get the six wins needed for bowl eligibility. It will be tough, no doubt, but this team is in every game and just needs to keep believing and learn how to finish games. We all know about the struggles late in games, problems that have led to four losses on the opponent's final offensive play. Heartbreaking stuff.

So, so close. A look at @HuskerFBNation's four heartbreaking losses. pic.twitter.com/BjeKT3p5Cz

It seems obvious to those of us in Spartan Land that the loss of defensive coordinator Pat Narduzzi (now head coach at Pitt) and some key players has made an impact. How bad do we lose to Michigan next week? – Terrence Whitman

Losing Narduzzi has to of had an impact, as have the numerous injuries the defense has been forced to overcome. Narduzzi was one of the best in the nation. Not only was he a smart tactician, but he was a dynamic personality. Not having his voice is big. As for losing at Michigan this Saturday ? be positive! The Spartans have a good shot to waltz into Ann Arbor and win. The big edge MSU has is at quarterback with Connor Cook being vastly superior to Jake Rudock.

Just a little something to get you ready for the latest installment of the @umichfootball-@MSU_Football series. pic.twitter.com/t2UIxuSMwK

Is it possible that you may end up marrying Jim Harbaugh? – Greg

No, silly. But we do text each other smiley face emoticons and lots of LOLs.

Why does Wisconsin continue to play Joel Stave? Do you think that at some point the staff might give D.J. Gillins some reps to prepare for next season? – Daniel Freres

Stave isn?t Dan Marino. But, he has been solid so far in 2015. And, more vital: He?s the QB who gives the Badgers the best shot to win. Stave is No. 4 in the Big Ten in passing (231.0 ypg) and is hitting 59 percent of his attempts with eight touchdowns and four picks. And this is a Badger squad that increasingly has had to rely on its passing game to win. Witness last week at Nebraska, when 50 passes were thrown. Wisconsin isn?t up to par along the offensive line-and top back Corey Clement is still out with a sports hernia. So, Stave?s value is apparent.

Can Michigan win the big games with QB Jake Rudock? Or will the Wolverines have to wait until they get one of the up-and-coming recruits? – Ken Emerson

We will find out this Saturday when Michigan State comes to the Big House. But, I can?t wait to see what Jim Harbaugh will do once he grooms a blue-chip QB. Remember what he did with Andrew Luck at Stanford? Exactly.