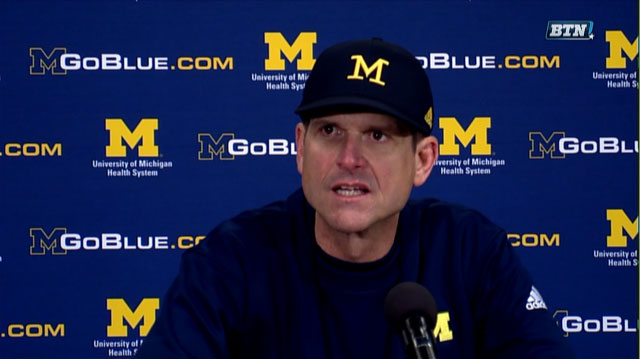 USA Today has its coaching salary data base out. And, Jim Harbaugh is paid pretty well ? to the tune of a cool $7 mil this year.

They all have won national titles; Harbaugh hasn?t-but he?s still worth every penny. Here is a link to the database.

Rutgers has a tall task when Michigan State comes to Piscataway, N.J., this weekend. But, motivation won?t be an issue for RU, which wants to make the Spartans answer for a fake field goal in last year?s blowout.

MSU called the fake leading 35-0 early in the third quarter.

"I try not to remember, but I remember that," wide receiver Janarion Grant said. "It was crazy."

Jones points out the circumstances around Hackenberg: Awful O-line. Ill-fitting head coach replacing one that dovetailed perfectly. Scheme that does not maximize his talents. Hackenberg has handled himself in exemplary fashion. He has never thrown his teammates under the bus. He has shown up after every game and answered tough questions about often unsightly performances the best way he knows how with thought and honesty. And Jones thinks, while 2014 and 2015 may turn out to be lost years in his development as a quarterback, they'll turn out to be very valuable to his development as a man.

Basketball is percolating across the Big Ten, as the balls have been rolled out and practices are well underway. What will Minnesota?s starting lineup look like?

The Minneapolis Star Tribune notes that Richard Pitino, in a press conference before the start of official fall practice last week, laid out a potential starting lineup that was heavy on veterans and without any of the hotshot freshmen that arrived on campus this summer.

Not bad. Not bad, at all. Speaking of Minnesota, U regents expect to approve $166 million Athletes Village. It?s a project that is well overdue.

The plan includes three new buildings to house practice facilities and amenities for its football and basketball teams, as well as an academic center for all student athletes. A regents committee discussed the plan Thursday and concluded without a dissenting voice.

More hoops: 35 photos of Iowa?s playmakers from HawkCentral.com. This looks like an NCAA tourney team, to me.

Can?t wait for the Northwestern at Michigan game. What do you think? A 6-3 final? Northwestern has lost four consecutive games to Michigan, dating back to 2011. Each of the losses has been worse than the one before it. InsideNU.com has a good recap of the Wildcat misery.

Michigan State?s offensive inconsistencies are well-documented. Maybe this will help: OC Dave Warner says in this video he has to open things up. That may help. But the fact the line has been banged up has been a big factor, too. This team just needs to get healthy.

Cleveland.com has five reasons why Ohio State will beat Maryland this Saturday. Five? You really need only one reason: Ezekiel Elliott.