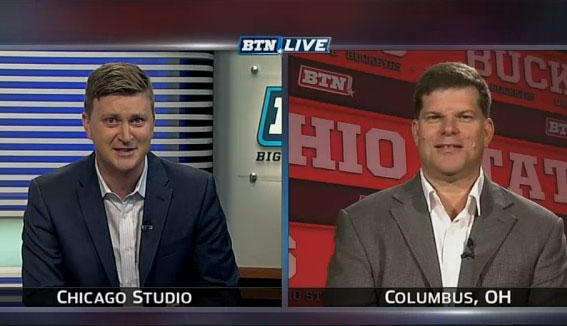 Who has the easiest schedules among the 15 major college unbeatens to stay perfect? According to this article from Cleveland.com, Iowa has the cushiest road in the Big Ten. Only two ranked teams remain on the Hawkeyes? schedule. And their remaining foes have a combined 16-14 mark.

Did you check out Nebraska I-back Devine Ozigbo last week vs. Illinois? The kid looks like a keeper.

Omaha.com says that Ozigbo, who most would have considered about fifth at I-back when practice started two months ago, is battling for a starring role. His rising status became clearer with a career-high seven carries for 70 yards at Illinois, including the 19-yard TD run that snapped a scoreless tie.

?He?s running hard,? quarterback Tommy Armstrong said. ?That?s what they?re looking for is someone who will stick their nose in there and go for those hard yards. He?s a freshman, but at the same time he runs like he?s one of the veteran guys on the team.?

Ozigbo had just two carries in the Huskers? first four games, but was seeing time on two special-teams units. His practice work at I-back increased each of the last two weeks.

Is it possible that the Buckeyes are playing him too much and trying too hard to shoehorn him into this offense? The two other options at H-back, Dontre Wilson and Chris Samuel, have been singled out for praise by Urban Meyer in recent weeks. Doesn?t it seem like years ago when we were all agog over Miller?s performance at Virginia Tech? OSU has to figure a way to use his considerable skills.

Nice story in the Des Moines Register on Iowa OT Ike Boettger, who like predecessor Brandon Scherff has made the transition from prep QB to college lineman.

Scherff played quarterback at Denison High School as a sophomore before becoming a consensus all-American left offensive tackle for the Hawkeyes. During the summer of 2014, Scherff took Boettger under his wing. He taught him the nuances of the position, and the value of eating more than three meals a day. Looks like Iowa may have another special talent.

InsideNU.com nailed it when it wrote that Northwestern and Michigan are basically the same team.

Now that Rutgers has reinstated WR Leonte Carroo, can he turn around the season?

I think it will take more than that. Still, as Steve Politi of NJ.com points out, Carroo provides a deep threat that the Scarlet Knights lack. He is the program's all-time leader in touchdown receptions, and if quarterback Chris Laviano can get him the ball, it will make an impact. Carroo also should make an already strong RU ground game even more effective.

Indiana QB Nate Sudfeld and RB Jordan Howard will travel to Penn State. No word on if they will play.

Both players have been nursing ankle injuries. Sudfeld suffered his against Wake Forest in Week 4 and aggravated it last weekend vs. Ohio State. Howard suffered his against the Buckeyes. Even if they can?t go, I think the Hoosiers may be OK with Zander Diamont under center and Devine Redding running the ball.

The Illinois defense was a revelation last week in a 14-13 win vs. Nebraska. In fact, the once maligned unit has played better all year. And a key guy has been end Dawuane Smoot, who has four sacks in 2015.

The junior LEO is thriving in his hybrid defensive end/linebacker spot, clearly asserting himself through the Illini?s first five games as the one player likely to bring down the quarterback.

An already shaky Wisconsin o-line may be undergoing more change because of injury. How bad has it been? Jeff Potrykus of the Milwaukee Journal-Sentinel notes the Badgers could trot out their fourth different starting front in six weeks this Saturday at Nebraska.

You think you have issues, Coach? Minnesota had 20-TWENTY-players miss practice because of injury on Wednesday.

?I?ve never seen anything like it in my 32 years of coaching,? Jerry Kill said. ?Just one of those years. What do you do? Like I tell our guys, ?You can?t get down. You just coach them.? We?re going to play with some young players probably, and that?s part of it. They?ll have to grow up, and we?ll be better down the road for it.?