Shilique Calhoun Q&A: 'We want to play a perfect game for 60 minutes' 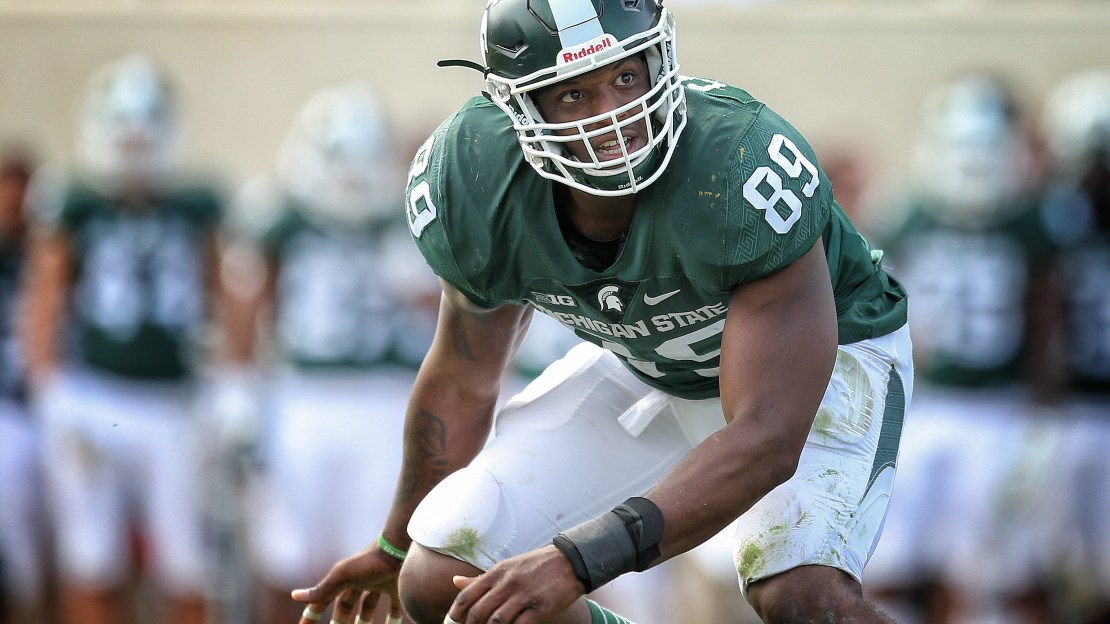 Any conversation about the Michigan State defense begins with stud end Shilique Calhoun, one of the most feared-and affable-players in the Big Ten.

Calhoun was a preseason All-American who is looking to go out in style as a senior. So far, so good, as the Spartans are 5-0 and in the thick of the Big Ten title and playoff chases. It continues this week for Calhoun and MSU with a game at Rutgers in Calhoun?s home state of New Jersey. Watch Michigan State at Rutgers on BTN2Go.

The 6-5, 270-pound Calhoun has 4.5 sacks so far in 2015 to go along with 5.5 tackles for loss for a Spartan defense that is still looking for its groove. Michigan State is just No. 9 in the Big Ten in scoring defense (20.8 ppg) and No. 9 in total defense (376.8 ypg). The third quarter has been especially troublesome, as have big plays. I caught up with Calhoun discuss those things and a variety of subjects.

Q: What type of grade would you give yourself so far this season?
A: Average. Definitely average. I can see myself doing a lot better. I hope to keep progressing and moving up from there. Every game is a learning experience.

Q: Has it been a frustrating year for you guys?
A: Not so much frustrating. We are looking at the film and evaluating and understanding that we are hurting ourselves. We need to be better. We need to communicate better. I think we have a great team. Our biggest downfall now is communication, and we can improve and are able to correct that.

Q: Why has the team struggled so much in the third quarter?
A: It?s focus. Our focus level, we need to pick it up and know when we go out there in the third quarter that we are as pumped up as much as when we start a game. We lose a little bit of energy. It is on us as players to keep ourselves up and motivate each other so we are ready to go. We want to play a perfect game for 60 minutes.

Q: Have any young players caught your eye on defense?
A: There are a lot of redshirt freshmen doing a good job on scout team. They can play. You will notice when you see them. Guys like Raequan (Williams). He is very raw. Once he finally understands technique, he will be one of the best players to ever come through Michigan State. Cassius Peat. His brother was Andrus Peat who went to Stanford. He is a big guy, a wide body with really big legs. And he uses them very well. Once he learns the game and starts to understand, he will be one of the better playmakers on defense. We have so many good young guys on defense.

Q: It is third-and-10, what pass rush move do you use?
A: I am gonna give you my alternate, because if I give my top move, people may read this and what you are writing and try to figure a way to stop me. No, I?ll give you my A1 move. It?s basically the speed rush. I think I have gotten better over the years. The big thing is to focus on the tackle. Watch the ball, watch the tackle. The first move, you want to get off. Hopefully you?ll get off faster than the tackle. If not, the biggest thing for a d-lineman is being able to use your hands. You want to chop his hands down and bend the corner, turn your foot toward the quarterback as you are bending the corner so it pulls you toward the quarterback and lean into the tackle so you still have pressure and he isn?t just pushing you up the field. Third-and-10, that?s the first move I am thinking of-speed rush. I am going to beat him off the line, use my hands ? he won?t even be able to catch me.

Q: Any NFL pass rushers you like to watch?
A: There are a lot of them. Guys like Justin Tuck. I even watch inside guys, Ndamukong Suh. It varies. I like different moves they use and try to fit them into my schemes and body type. And my opponent will give me hints on what moves I should use. You can pull something from anyone.

Q: Big Ten title or bust?
A: Of course we want to make it to the Big Ten championship. We want to win each game, and hopefully that will put us in the championship game. The sky is the limit. We will see where it takes us.

Q: The Spartans have done a lot of late, winning the Big Ten, Rose Bowl and Cotton Bowl. What would it mean to get Michigan State into the playoff?
A: It would be special, especially as a senior. To go out with a bang. Every senior wants that. I hope we can.