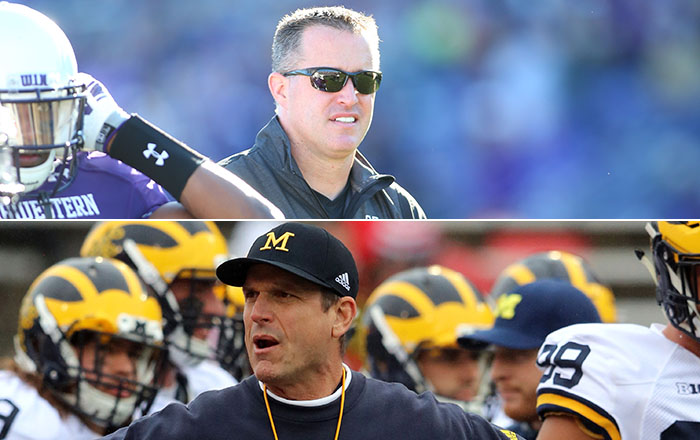 A full slate of Big Ten games is on tap with all 14 teams in action. And the ?big one? is up in the Big House, where 4-1 Michigan will take on 5-0 Northwestern in a fascinating inter-divisional clash.

Illinois? trip to Iowa is an under-the-radar West Division clash that features two of the league?s surprise squads. The Wisconsin at Nebraska pits two teams hungry for victory. Purdue has a great shot for its first Big Ten win in Ross-Ade Stadium since 2012 with slumbering Minnesota coming to West Lafayette. Indiana can show it may be the fourth-best team in the East with a win at Penn State. Ohio State? Michigan State? Each is playing a foe it should dominate ? but will it?

Check out my Week 6 previews below:

The last place a struggling Terrapins squad wants to visit is Columbus, Ohio. Yes, the Buckeyes haven?t been the buzz saw many had envisioned. Still, this is an uber-talented Ohio State club that will present myriad issues for a Maryland team that is a mess. Turnovers and hideous quarterback play have rotted the Terrapin offense. The Terps have 17 turnovers, which are the most nationally. QB Caleb Rowe started for the third straight time last week and struggled again, throwing three more interceptions to give him 12 on the season. The defense? It?s 13th in the Big Ten (449.4 ypg), last in rushing defense (199.8 ypg) and 12th in scoring defense (31.8 ppg). The Buckeyes QB situation should be a non-story this week. OSU-riding a national-best 18-game winning streak–probably can just let RB Ezekiel Elliott run 35 times and cruise in this game. He?s run for over 100 yards in each game this season and for 10 straight dating back to last season, which is the most by an Ohio State running back since 2000. Elliott burned IU for 274 yards rushing last week and paces the Big Ten with 729 yards rushing.

Here's what defending national champ and No. 1 @OhioStAtheltics has left. pic.twitter.com/zq3Se5jn10

Who anticipated this being a big game back in August? Illinois enters its border battle coming off a miraculous last-second win vs. Nebraska that could be a spark to big things. It was the second consecutive week that Illinois rallied for a victory. After trailing 13-0 to start the fourth quarter, Wes Lunt threw two touchdown passes to give Illinois the win and stun the Huskers. It was the Illini?s seventh fourth quarter comeback over the last two seasons, the most of any team in the nation. Sounds like RB Josh Ferguson won't play after getting hurt last week. The play of the Illini defense has been inspirational. The unit was able to hold an explosive Nebraska offense in check, holding the Huskers to one offensive touchdown. Nebraska had scored at least three touchdowns in each of its previous 18 games. Iowa is smoking hot, 5-0 for the first time since 2009. And it may be the favorite in the West after posting a monster win at Wisconsin last week that was fueled by the defense. The Hawkeyes may be the most complete team in the Big Ten, having a balanced offense and stout defense. Iowa has won six of the last seven games vs. Illinois, including last year?s meeting (30-14) in Champaign. This will be the first meeting between these teams in Iowa City since 2007, a 10-6 Iowa win.

A key battle for pecking order in the Big Ten East. Could the Hoosiers be the fourth-best team in the division? Perhaps. How will Indiana perform coming off an emotional loss vs. No. 1 Ohio State that it came close to winning? IU saw QB Nate Sudfeld and RB Jordan Howard leave the game with ankle injuries. How much will both play this week? If at all? If they can?t go, Zander Diamont and Devine Redding will take over, respectively. Each is capable. This game wraps up a run of five home games in succession for the Nittany Lions. And, they have made hay, winning the first four. But the squad isn?t clicking, especially on offense. The Nittany Lions are 12th in the conference in scoring (24.4 ppg) and last in total offense (329.2 ypg). PSU had only 264 total yards in a less-than-impressive win vs. Army. It was the fewest yards in a non-conference home game for the Nits since 2011. The rush game floundered without RBs Saquon Barkley and Akeel Lynch, who both got hurt the week before. When will they be back? A big key for Indiana? Generating turnovers. The Hoosiers are plus-nine, tied for second-best in the nation. But Indiana is 1-15 in Big Ten road games under Kevin Wilson, including a 10-game losing streak. Penn State never has lost at home to Indiana (8-0).

Two hot programs clash in what should be an epic defensive struggle. Each is coming off a shutout. The Wildcats have allowed just three touchdowns in five games and have two shutouts. They lead the nation in scoring defense, allowing 7.0 ppg. They also rank seventh nationally in pass defense (130 ypg), and fifth in total defense (247.4 ypg). The NU offense is fueled by the Big Ten?s No. 1 rushing attack, averaging 248.8 yards per game. Sophomore star Justin Jackson has rushed for 636 yards, which is the third-most in the conference. And he has been a workhorse with a Big Ten-high 138 totes. After allowing 24 points in the season opener at Utah, Michigan has yielded only 14 points combined over the last four games and has pitched consecutive shutouts. The Wolverines have allowed just one touchdown in the last 15 quarters, and have permitted 105 yards in each of their last two games. And like Northwestern, Michigan?s offense is led by a strong rushing game that averages 201.4 yards and has several capable options. Despite not having running back De?Veon Smith last week, the Wolverines were still effective running the ball at Maryland, putting up 198 yards on 40 carries with Drake Johnson netting 68 yards on 13 carries. Ty Isaac also is capable. It is uncertain when Smith will be back.

Two teams desperate to sip from the Cup of Success. Minnesota was thought to be a legit contender to win the West, but hope seems to be fading thanks largely to a listless offense. The Gophers bottomed out last week in a 27-0 mugging at Northwestern. The 173 total yards were the fewest the Gophers have had in a game in three years, as QB Mitch Leidner was pulled and freshman Demry Croft entered. It sounds like Leidner will start at Purdue, but Croft figures to play. How bad has the Gopher attack been? Minnesota averages 15.4 points, which is the second-fewest nationally. Enough said. Unbelievably, Darrell Hazell still hasn?t won a Big Ten home game (0-8) since taking over in 2013. He has just one league win (1-16). Yes, Purdue is playing better than its 1-4 record. But at some point, wins must be delivered. The Boilermakers were within three points or tied in the final 90 seconds in three of their losses. Turnovers continue to hound the Boilers, who have 13 (tied for the ninth-most nationally). And the defense has disappointed. If a unit can?t stop the run, there is scant chance for success. Witness Purdue, which is 13th in the conference in rushing defense, allowing 193 yards per game.

Each squad is in need of some positive mojo-especially Nebraska. The lack of a dominant run game caught up to the Badgers in a 10-6 home loss to Iowa last week. Wisconsin is ninth in the conference in rushing, averaging 168 yards per game with RB Corey Clement still out with a sports hernia. The o-line doesn?t appear to be up to its usual standards, which exasperates matters. And QB Joel Stave may be little more than a facilitator, unable to win a game with his right arm. His four turnovers last week vs. Iowa (one on the Hawkeye 1-yard line) were killer. This Badger offense needs some answers ? quickly. At least Wisconsin can lean on a rugged defense. Against Iowa, the Badgers allowed just one touchdown, the only TD they have yielded in the last four games. The Cornhuskers? loss at Illinois last week can only be described as sickening, as the Illini scored the winning TD with 10 seconds left after some inexplicable decisions by Nebraska gave Illinois the ball back late with a chance to win-and the Illini seized it. The prolific offense stalled at Illinois with just 13 points and 292 yards-both season lows. This has been a hard-luck team whose three losses have come by a combined nine points. And two of those losses came with Nebraska leading in the final 11 seconds and the other came in overtime. How bad is it? The Huskers have a losing mark (2-3) after five games for the first since 1959.

The Scarlet Knights are coming off a bye following a much-needed home win vs. Kansas. Maybe the extra prep time will help vs. the mighty Spartans. Maybe not. For the Scarlet Knights to have any shot, they must run well. RU is fourth in the Big Ten in rushing, averaging 211 yards per game on the ground behind Josh Hicks and Robert Martin. Rutgers, which will be without coach Kyle Flood for a third and final game as he finishes his suspension, will face a banged up Spartans team that is riding a nine-game winning streak. Michigan State has three players who are out for the season (LB Ed Davis, CB Vayante Copeland and OT Dennis Finley), another player who is out for an extended period of time (S R.J. Williamson), and a couple more who missed last week and could miss this week (OLs Jack Conklin and Kodi Kieler). All told, seven projected starters have missed at least one game. And defense hasn?t been a strong suit for MSU, which got dusted for 157 yards rushing last week by a Purdue true freshman running back. Is this the week it all clicks for the Spartans? America is waiting.