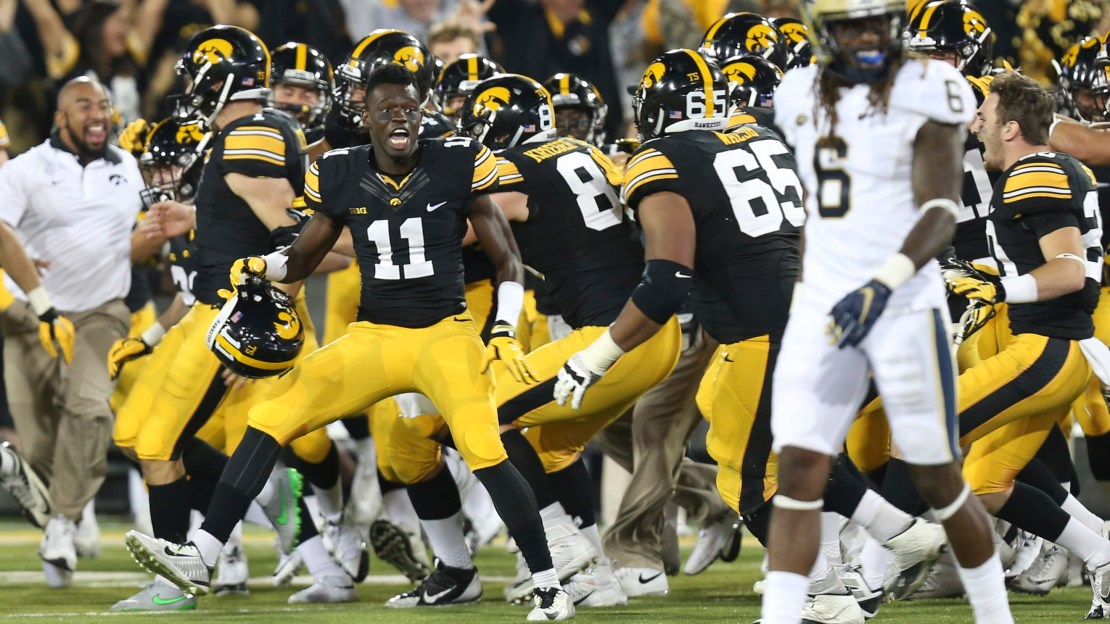 Perfect Iowa and Northwestern finally make a move in my latest Big Ten Power Rankings, presented by ArcelorMittal. But the question is, can anyone ever catch Ohio State and Michigan State?

1. Ohio State (3-0). That?s two weeks, and two unimpressive wins. Is this REALLY the best team in America at this very moment? Hey, the No. 1 team in the nation is held to a high standard. Just winning isn?t always enough.
Last week: 1
Up next: vs. Western Michigan

2. Michigan State (3-0). It really wasn?t a shock that the Spartans didn?t blow away Air Force coming off that emotional win vs. Oregon. MSU got the triumph and remains in the chase for a playoff spot. All is well.
Last week: 2
Up next: vs. Central Michigan

3. Iowa (3-0). A storybook season continues for the Hawkeyes, who are 3-0 for the first time since 2009. Offense, defense, special teams ? Iowa is humming in every phase.
Last week: 7
Up next: vs. North Texas

4. Northwestern (3-0). The good times continue to roll for the Wildcats, who enhanced their early-season ?darling? status with yet another win. The defense, which has allowed just one touchdown, needs to take a bow.
Last week: 8
Up next: vs. Ball State

5. Wisconsin (2-1). The Badgers continue to hum along, as QB Joel Stave is quietly enjoying one of the best seasons among any signal-caller in the Big Ten. It's only a matter of time before Corey Clement returns to the backfield, right?
Last week: 4
Up next: vs. Hawaii

Tanner McEvoy takes the snap and runs in for a 32-yard @BadgerFootball TD! Brought to you by #GrubHub. http://t.co/Tcp6VFAhkz

6. Michigan (2-1). This team looks to be getting better and better with each passing week. The running game and defense can take this program a long way. It may soon be time to fear the Wolverines.
Last week: 6
Up next: vs. BYU

8. Nebraska (1-2). The season is just three weeks old, and the Cornhuskers already have lost two heartbreakers. The latest saw a valiant 23-point fourth-quarter rally go for naught in overtime at Miami (FL).
Last week: 5
Up next: vs. Southern Miss

9. Indiana (3-0). Don?t look now, but the rallying Hoosiers are 3-0, following three consecutive second-half comebacks, and sitting pretty to earn a bowl bid. How many wins can IU get this season? Six? Seven? Eight?
Last week: 10
Up next: at Wake Forest

10. Maryland (2-1). The Terrapins made a switch at quarterback, subbing Caleb Rowe for Perry Hills. And, it just may be a move that saves the season. At least it looked good for one week.
Last week: 14
Up next: at West Virginia

11. Penn State (2-1, 1-0). The Nittany Lions and freshman sensation Saquon Barkley took out some frustrations vs. a Rutgers program mired in turmoil. This was a game Penn State needed to win-and did.
Last week: 13
Up next: vs. San Diego State

12. Illinois (2-1). The Fighting Illini had a big hole poked in their 2-0 start by North Carolina. The offense struggled, the defense got ripped ? now what?
Last week: 9
Up next: vs. Middle Tennessee

13. Rutgers (1-2, 0-1). It had to be difficult to be focused among all the tumult around this team. The Scarlet Knights didn?t have their head coach (Kyle Flood) or best player (Leonte Carroo). And, it looked like it at Penn State.
Last week: 11
Up next: vs. Kansas

14. Purdue (1-2). The Boilermakers became unhinged while getting routed by Virginia Tech in a game that looked a lot like so many others under Darrell Hazell–ugly.
Last week: 12
Up next: vs. Bowling Green