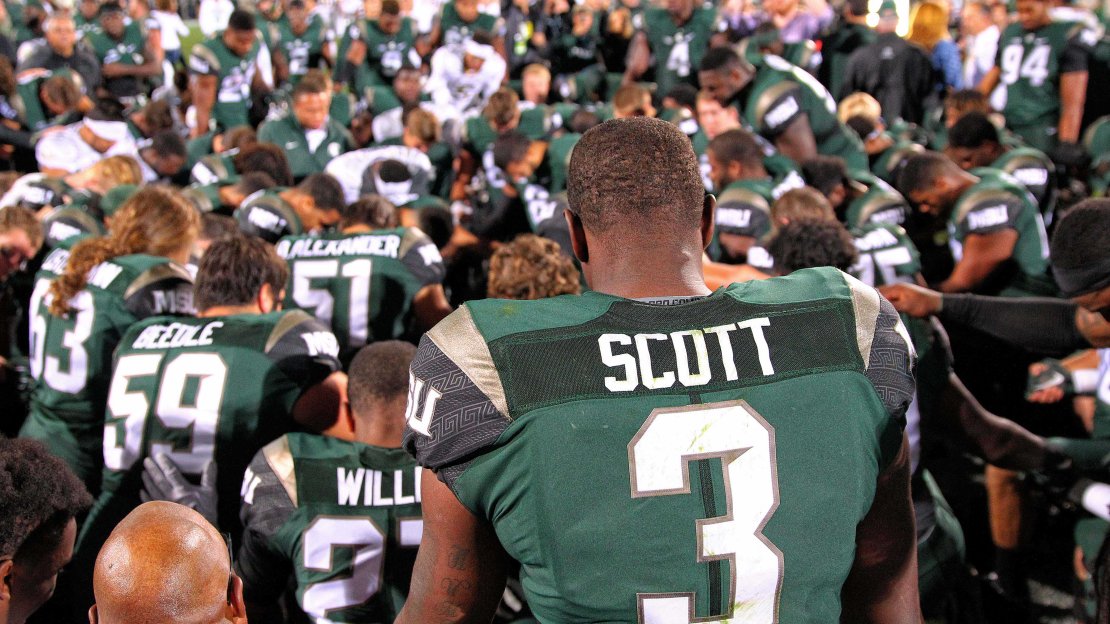 Two weeks are in the books, and Illinois and Northwestern continue to surprise.

The two teams have combined to outscore opponents, 153-9. Who saw that coming, no matter the opponents?

It being Sunday, it's time to reveal my latest Big Ten Power Rankings, presented by ArcelorMittal. Check out the full list below.

1. Ohio State (2-0). Is this two-quarterback system gonna work? The Buckeyes looked ordinary in dispatching Hawaii a week after that breezy win at Virginia Tech. Keep in mind, though: Ohio State played Monday night and was playing on four days rest.
Last week: 1
Up next: vs. Northern Illinois

2. Michigan State (2-0). The Spartans took care of business vs. Oregon in yet another program-defining win. Now, it?s all about improving as they aim for that trip to Ohio State in November.
Last week: 2
Up next: vs. Air Force

3. Minnesota (1-1). The Gophers showed lots of heart by bouncing back from the loss to then-No. 2 TCU and grinding out an overtime win in a tough place like Colorado State.
Last week: 3
Up next: vs. Kent State

4. Wisconsin (1-1). The 58-0 flogging of Miami (Ohio) was just what the doctor ordered for the Badgers after that disheartening loss vs. Alabama. Things are gonna be OK, right?
Last week: 4
Up next: vs. Troy

5. Nebraska (1-1). That Hail Mary loss to BYU? History. The Huskers got back on track with a blowout of South Alabama. This is more like it.
Last week: 5
Up next: at Miami (Fla.)

6. Michigan (1-1). The Wolverines found the Jim Harbaugh formula vs. Oregon State. Punishing running game; suffocating defense. A perfect way for Harbaugh to get win No. 1.
Last week: 6
Up next: vs. UNLV

7. Iowa (2-0). The Hawkeyes are as hot as any team. C.J. Beathard looks like a revelation at quarterback. This team will be a factor in the West.
Last week: 7
Up next: vs. Pittsburgh

8. Northwestern (2-0). How about those Wildcats? NU is 2-0. And the defense has allowed just six points (two field goals) in two games. Is this the best team in the Big Ten West?
Last week: 8
Up next: at Duke

9. Illinois (2-0). This team has been a Big Ten surprise, outscoring foes, 96-3 the first two weeks. How about that defense? (Yes, you just read that.)
Last week: 9
Up next: at North Carolina

10. Indiana (2-0). After a close call in the opener vs. Southern Illinois, the Hoosiers had another close one vs. Florida International. But, in the end, the defense showed some heart. Really.
Last week: 13
Up next: vs. Western Kentucky

11. Rutgers (1-1). How will the Scarlet Knights rebound from a tough loss? More importantly: Can the defense improve after a horrid effort vs. Washington State?
Last week: 10
Up next: at Penn State

12. Purdue (1-1). The Boilermaker offense continues to hum along, scoring a combined 69 points the first two games. And they ended a seven-game losing skid last week, too.
Last week: 12
Up next: vs. Virginia Tech

13. Penn State (1-1). It wasn?t pretty, but the Nittany Lions got a needed win. Most vital: The offense showed a pulse. But, more is needed. At least there will be no need to bury the game tape this week.
Last week: 14
Up next: vs. Rutgers

14. Maryland (1-1). The Terps were the most disappointing team last week. The defense got ripped by Bowling Green. And the upcoming schedule is tough. What direction will this team go?
Last week: 11
Up next: vs. South Florida