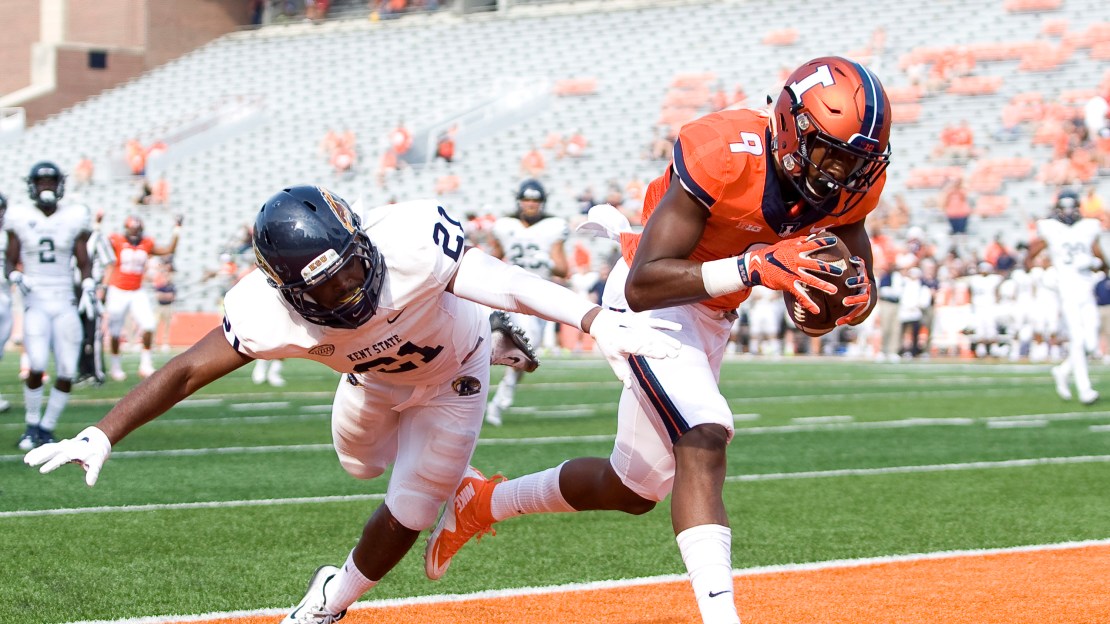 One big, thick juicy Big Ten Power Rankings is coming right up. Sharpen your knife and fork … and enjoy. This is just Week 1, so don't overeat–or overreact–to this poll, presented by ArcelorMittal.

1. Ohio State (1-0). From Braxton Miller?s mind-numbing spin-o-rama to a timely defense, the Buckeyes displayed it all in blasting Virginia Tech. Who can beat this team? Anyone? Bueller?
Last week: 1
Up next: vs. Hawaii

2. Michigan State (1-0). Was the Spartans? win at Western Michigan impressive? No, but MSU got past this tune-up and can now focus on Oregon?s visit. It?s payback time.
Last week: 2
Up next: vs. Oregon

3. Minnesota (0-1). As expected, the Gophers lost to TCU. No shame there. But Minnesota made the Horned Frogs look ordinary. And the Gopher defense looks as good as advertised. This still could be a special season.
Last week: 3
Up next: at Colorado State

4. Wisconsin (0-1). It?s difficult to know how good the Badgers are coming off a game vs. mighty Alabama in which some key players were non-factors because of injury. Let?s just forget this game and move on, OK? It didn?t really happen.
Last week: 4
Up next: vs. Miami (OH)

5. Nebraska (0-1). Mike Riley?s debut went from a wild party to a wake quicker than it took for me to type this. Don?t fret, Huskers fans. This one hurts, but we all saw enough to be encouraged about the future.
Last week: 6
Up next: vs. South Alabama

Can we talk about this Tommy Armstrong @Huskers block? Dude basically took out three defenders. http://t.co/xGSrNu2CfT

6. Michigan (0-1). Lots to build on for the Wolverines in their loss at Utah. The defense is good. It?s the offense that needs help. More oomph is needed in the run game. I?m looking at you, offensive line. And QB Jake Rudock must limit turnovers.
Last week: 5
Up next: vs. Oregon State

7. Iowa (1-0). The Hawkeyes had what those in the biz call an ?ideal? start to the season, showing much-needed muscle, mite and moxie on offense in overwhelming a foe it should have overwhelmed. Last week: 8
Up next: at Iowa State

8. Northwestern (1-0). Was any Big Ten squad more impressive than the Wildcats in Week 1? Nope. The defense could be special. The offense? It was physical, which had been a missing trait. And QB Clayton Thorson has potential.
Last week: 11
Up next: vs. Eastern Illinois

9. Illinois (1-0). The head coach gets fired a week before the opener? No problem. The Fighting Illini played like a focused and purposeful team in crushing Kent State.
Last week: 14
Up next: vs. Western Illinois

11. Maryland (1-0). The Terps overcame a slow start to trample Richmond. Perry Hills has his moments under center, and the defense is adapting to a new 4-3. Encouraging stuff.
Last week: 12
Up next: vs. Bowling Green

12. Purdue (0-1). The Boilermakers let one get away at Marshall. Still, Darrell Hazell has a lot to build on. The big key: Getting more big plays in the passing game. And not tossing Pick Sixes would be a BIG help, too.
Last week: 13
Up next: vs. Indiana State

13. Indiana (1-0). A win is a win is a win, right? I guess. But this ?win? vs. Southern Illinois sure felt like a loss. Doesn?t matter. The Hoosiers must accentuate the positives from a too-close-for-comfort win.
Last week: 9
Up next: vs. FIU

14. Penn State (0-1). Hard to envision a worse way to begin a season. The offense is in full-blown dysfunction. Someone call a shrink. Get this: The Nittany Lions had 31 yards on 24 plays in the second half.
Last week: 7
Up next: vs. Buffalo