Dienhart: 'Illinois can turn the page and begin anew yet again' 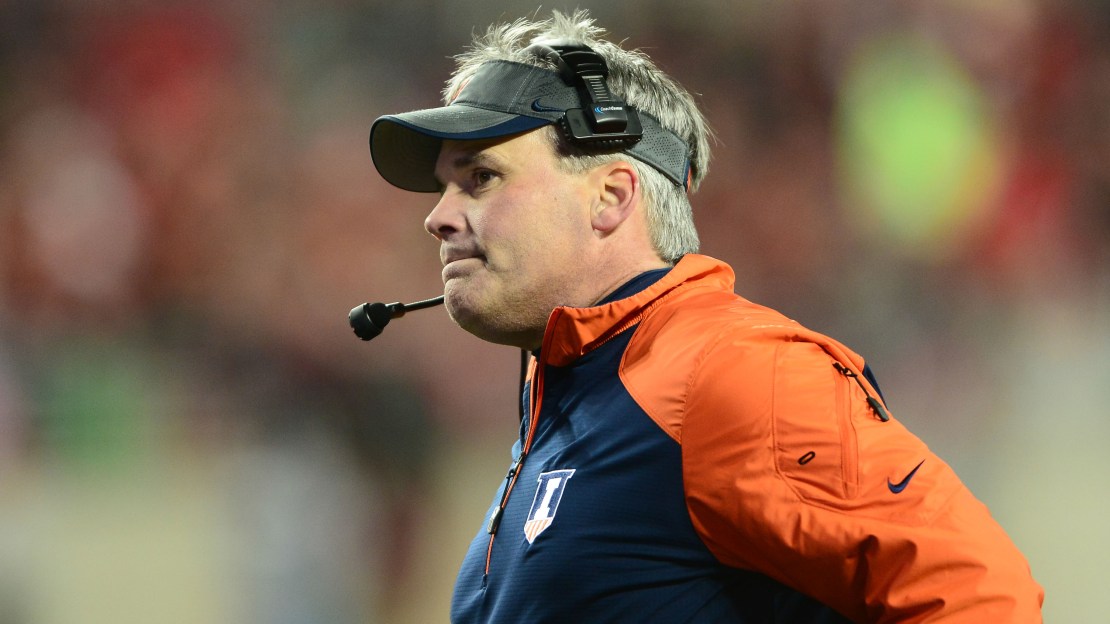 This is the time of year when all things seem possible on college campuses. Visions of conference titles, bowls and playoff berths dance in the heads of giddy fans.

But Illinois finds itself bidding goodbye to its head coach a week before kickoff, a bizarre development for a Fighting Illini program that can?t seem to get on track.

Tim Beckman is out after an internal investigation showed he mishandled players.

"The preliminary information external reviewers shared with me does not reflect our values or our commitment to the welfare of our student-athletes, and I've chosen to act accordingly," Athletics Director Mike Thomas said in a statement. "During the review, we have asked people not to rush to judgment, but I now have enough information to make this decision in assessing the status and direction of the football program."

To knowingly not report injuries and influence medical decisions to keep players on the field is unforgivable, especially in an era when the welfare of student-athletes is an A-1 issue.

That warrants being fired.

Thomas says there also were instances where players were treated inappropriately in regards to their scholarship status.

Beckman denied the implications in a statement to the AP, saying that the firing was a "rush to judgment."

"I am shocked and extremely disappointed by the decision Mike Thomas and the University of Illinois made today regarding my employment as Head Coach of the football team," Beckman told the AP. "First and foremost, I firmly deny the implications in Mike's statements that I took any action that was not in the best interests of the health, safety and well-being of my players."

Even before all of this Beckman seemed to be walking a tight rope as he entered 2015 with a lot to prove, facing perhaps a bowl-or-bust season. Well, the largely unpopular Beckman made the decision for Thomas easy. Now, Illinois can turn the page and begin anew yet again.

And that?s the problem in Champaign. There has been too much ?page turning? over the last 50 years and not enough stability. Since 1966, Illinois has had 16 winning seasons. And five of those came under Mike White (1980-87), who got the program on NCAA probation.

Sixteen winning seasons ? since ? 1966. Think about that.

As a result, Illinois has not reached its considerable potential as a program. Hitting the reset button three years into a coach?s tenure is the last thing a rebuilding program needed.

Some people call Illinois a ?sleeping giant.? Perhaps. At the very least, this should be a program that contends fairly regularly for the Big Ten West title, which isn?t a big hill to climb compared to the Big Ten East.

It looked like Beckman, who was difficult to embrace, was getting some traction after taking the program to its first bowl last season since 2011, but it took season-ending wins against Penn State and Northwestern to reach six victories. Had that not happened, some think Beckman would have been gone after 2014.

Now, after three mostly inglorious seasons, the Beckman era is over. His tombstone will read: 12-25 overall and 4-20 in the Big Ten. It was a dubious hire from the start, as Beckman was often viewed as a bit of a goof after arriving from Toledo. His image and rep took a beating right out of the gate when he dispatched coaches to Penn State in hopes of poaching players who were free to transfer in the wake of the Jerry Sandusky scandal.

And then there was a persona that can only be described as goofy. Beckman was full of slogans, often delivered with a tempo and booming tenor of a revival tent preacher. See his recent Media Day performance for yourself. There was just a lack of authenticity with Beckman.

Ask yourself this: Did we ever really know the guy?

Regardless, Beckman is out. And offensive coordinator Bill Cubit is in. Illini fans should be saying "Hallelujah" to that.

Cubit will serve as the interim head coach, a good move and really the only one right now. In fact, if Cubit does well and manages this team into a bowl game, I believe he should get the full-time gig.

As it is, the program is thrown into limbo thanks to an unknown future. Is Cubit the answer? If not, then who? Recruiting will be difficult this fall, threatening the quality of the 2016 Class. And, Illinois can?t afford to lose a class.

Cubit, 61, is a sage and respected coach who has a personality the media and fans embrace. Plus, he?s smart. Cubit joined Illinois as offensive coordinator in 2013 after being fired at Western Michigan after the 2012 campaign.

While in Kalamazoo, Cubit forged a 51-47 mark with a 36-27 record in the MAC from 2005-12. (One of those wins was against Illinois in 2008.) The Broncos made three bowls in his tenure. Before that, Cubit was OC at places like Stanford, Rutgers and Missouri. He also has deep recruiting ties in Florida. The guy knows what he?s doing.

Cubit had full autonomy on offense under Beckman. And, the offense was the only good part of the program the last two seasons. The defense that Beckman was a part of? Rotten. Cubit?s task will be to get that defense from horrid to decent. If he can?t, Cubit?s offense will just have to outscore foes this fall. And, it may be capable of that behind Wes Lunt and a better line.

Cubit takes over a program where sustained success has been difficult to come by. In fact, lack of consistent success at Illinois has been one of the great wonders of the college football universe. This is a major state institution with academic heft situated in the middle of a good recruiting base.

You recall that Ron Zook had some moments, taking this program to the Rose Bowl in the 2007 season. Ron Turner took the program to a league title in 2001 that culminated in a Sugar Bowl bid. It looked like things were going to take off when John Mackovic took over in 1988 before he left for greener the pastures of Texas in 1991 and left Illinois with Lou Tepper.

You know how that went.

And on it has gone, a depressing march of unsuccessful coaches with Beckman being the last one to pass by the parade stand filled with hopeful Illini fans.

Now, Illinois finds itself at a familiar spot: A crossroads. Could the 2015 Illini make a bowl? Perhaps. Illinois could go 3-1 in the non-conference. Then, it would need to find three Big Ten wins. And, Illinois may have a shot to beat the likes of Iowa, Purdue, Penn State and Northwestern. But the Iowa, PSU and Purdue games are on the road. Still, a bowl is possible with that schedule and this roster-with Cubit at the helm.

This is the type of adversity that may galvanize the team. At least that is what Cubit hopes.

The season opens a week from today in Champaign vs. Kent State.