Lacrosse notebook: No. 3 Terps vs. No. 11 Buckeyes top weekend games 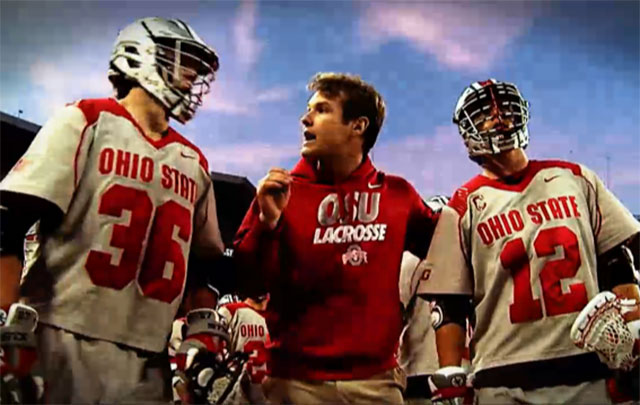 Catch up on all six Big Ten men's lacrosse teams in my Thursday notebook as we look ahead to Michigan at Johns Hopkins, No. 3 Maryland at No. 11 Ohio State, and Rutgers at Penn State. Maryland-Ohio State is 11 a..m. ET Saturday on BTN/BTN2Go – here's the link to watch live on BTN2Go. Rutgers-Penn State is 6 p.m. ET on Sunday on BTN/BTN2Go – here's the live link for that game, too.

Here's what you need to know about Big Ten lacrosse.

Hopkins earned a tough 11-10 win over Penn State in two overtimes. The Jays led 6-2 in the second period but surrendered five straight goals to trail 7-6. From there it was back and forth when they saw the Nittany Lions score the game tying goal with only 0:33 left in the game.

Undaunted, Hopkins used a Joel Tinney (3 goals, 2 assists) score  with just 7 ticks left on the clock in the second extra session. Goalie Will Ryan (nine saves) made his first career start and made a huge save in the second overtime. Wells Stanwick (2,5) notched the game winning assist. Stanwick took home Big Ten Offensive Player of the Week honors while Tinney won the honor for co-Freshman of the Week.

Michigan invades Homewood Field this Saturday for a pivotal Big Ten contest. The Wolverines are no strangers to Baltimore, playing the Blue Jays the last two seasons. Hopkins won both handily but the Jays are well aware the stakes are higher this season as the two will clash for the first time as members of the Big Ten.

Maryland got a huge scare from a scrappy Rutgers team on Sunday but prevailed 9-8. This game was a tale of two halves. The Terrapins trailed the Scarlet Knights 4-2 at the break after winning only 1-8 faceoffs. The Rutgers lead got to 6-3 with 9:00 left in the third period when the tables turned. Led by Jon Garino the Terps started to win faceoffs and the offense got going.

And when I say offense I mean Matt Rambo (3, 3) in particular. The sophomore attackman put the team on his back on his way to a six-point performance, the last one coming on the game winning goal with only 13 seconds left in the game. Much like the win against Loyola the Terrapins found a way to win.

The win sets up a colossal meeting with Ohio State, dubbed the ?Showdown in The 'Shoe. This game will be played prior to the Buckeye?s annual spring football game this Saturday and could see a crowd upwards of 30,000 fans. The atmosphere will be electric. Will faceoff man Charlie Raffa suit up? The senior has missed the last two games with an upper body injury. After two uncharacteristic performances can Maryland?s airtight defense return to form?

The Wolverines came out strong against Ohio State this past Sunday but fell 13-8. This team is tough and they didn?t back down from a strong Buckeye team. The battle in the Big House between these two as Big Ten adversaries in lacrosse was fun to watch. I loved the balance of the Michigan offense; seven different Wolverines scored, with Kyle Jackson scoring twice. What?s more Michigan?s defense held OSU?s Jesse King to one tally.

Michigan comes East this weekend to take on Hopkins. With a win the Wolverines can make a strong push for one of the four spots in the Big Ten Tournament. A loss means the last regular season game could become must-win. The Wolverines balance will be key, as will their off ball play on offense. The Blue Jays have been susceptible to ball watching and giving up a good amount of goals on cuts.

Despite trailing 3-2 after 15 minutes and giving up the first goal of the second quarter against Michigan on Sunday the Buckeyes rattled off five straight markers to grab the momentum and get on its way to a 13-8 win. The bad news is Jessie King was contained, only scoring one goal. The good news is others stepped up, with David Planning (2, 3), Colin Chell (3, 2) and Carter Brown (2, 1) getting the job done. Chell garnered co-Freshman of the Week honors for the Big Ten. Faceoff ace Chris May was 13-20 and earned Big Ten Specialist of the Week.

Maryland is next on the docket for the Buckeyes. Don?t expect this team to be star struck as the Scarlet and Grey has been involved in a plethora of big games this season. The last time they played the Terps in lacrosse was 2003, with Maryland winning 8-5. The 2015 editions are very similar, sharing traits of patient offense, solid D, good goaltending, and strong faceoffs. It is almost like looking in a mirror. I expect a similar type game on Saturday; low scoring, intense, hard fought, and physical.

The Nittany Lions played like a team fighting for their lives, rallying from a four goal deficit and forcing overtime. The result of an 11-10 double-overtime loss doesn?t take away from the effort they displayed. Offensively Nick Aponte (1, 3) grabbed the role of offensive leader and ran with it, creating a lot of opportunities for himself and teammates. Mike Sutton (3 G) and Pat Manley (4 G) were special too.

The most impressive Nittany Lion was goalie Conor Darcy. The first-year starter made 13 saves, including four in the overtime sessions. Several were spectacular. His play kept Penn State alive and gave them a chance to win.

Penn State will host Rutgers this Sunday. Winner stays alive in the hunt for the Big Ten postseason; the loser is most likely toast. The last time these programs faced off was in 2011, with the Nittany Lions winning 11-6. Penn State will need to compete at the faceoff and continue to move the ball on offense in order to be successful.

Rutgers gave Maryland all they could handle before falling 9-8 on Sunday. I was impressed with this young team. Middie Chad Toliver (1 G) is slick and athletic. He has great quickness that reminds me of Johns Hopkins great Kyle Harrison. A pair of sophomores, Christian Trasolini and Jeff George, each scored twice. Maryland simply made more plays down the stretch, something more experienced teams do. Rutgers will learn from this effort and only get better.

The Scarlet Knights are now in the danger zone of having to win in order to stay in the hunt for a Big Ten Tourney spot. Expect the tilt with Penn State to be very spirited in State College this Sunday. Will Joe Nardella be the difference this week for Rutgers?

Mark Dixon, a former Johns Hopkins lacrosse player, contributes to Inside Lacrosse and calls Big Ten men's lacrosse games on BTN. Follow him on Twitter (@dixonlacrosse). Don?t forget to check out the BTN TV schedule for lacrosse as well as the BTN Plus live streaming schedule, too.