No time to celebrate: Badgers need to follow up big win with another one 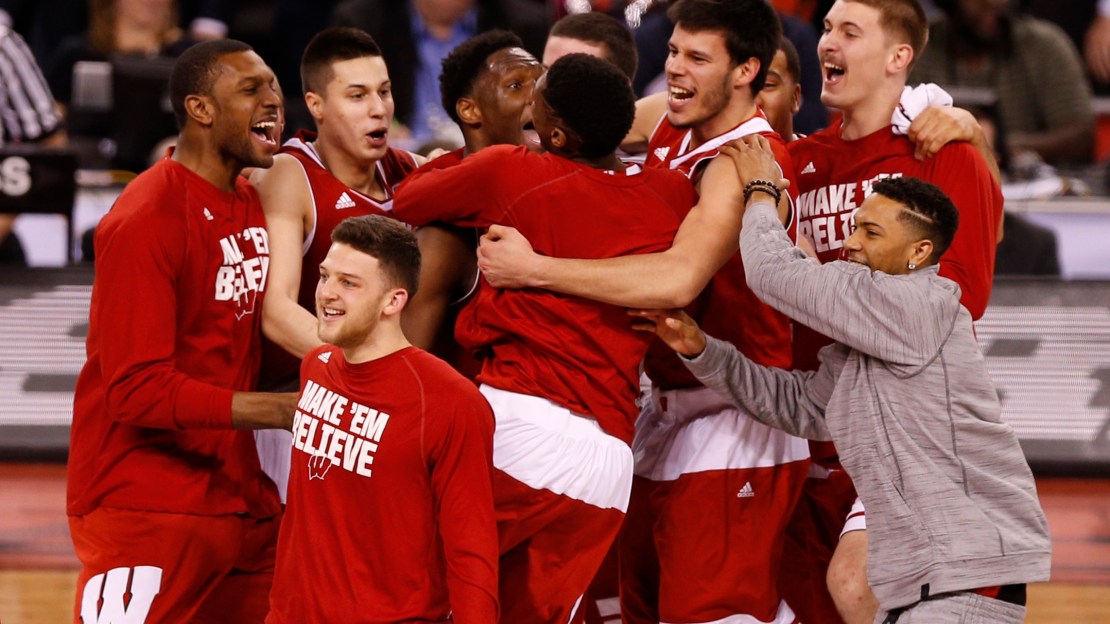 It all comes down to this.
Let's go, #Badgers. #MakeEmBelieve.http://t.co/f2uwDyXlOK

(AP) The scene will bring smiles to many for a long time. Players chest-bumping and hugging. Fans on the fringe of delirium. A celebration perfect for highlight reels and posters.

It has to end in a hurry, though. There's another game to be played.

Wisconsin has joined the list of teams which won a game of historical proportions only to be faced with a game that will decide how great the magnitude of the event will be.

The Badgers beat Kentucky 71-64 on Saturday night, ending the Wildcats' pursuit of an unbeaten season and avenging a bitter loss in last year's national semifinals.

Now, they face Duke on Monday night for Wisconsin's first national championship in 74 years. If the Badgers can't find a way to beat the Blue Devils – a team they lost to by 10 points at home in December – how will the upset of the top-ranked Wildcats be remembered?

The tale of the tape for the national title game Monday night. pic.twitter.com/JBUSmnEllt

"We know we've got 40 more (minutes), as I've said a thousand times," Wisconsin coach Bo Ryan said Sunday. "But we know we've got some work to do. I think last night's game simply says, `OK, it puts you in position now to go after the championship.'"

Two teams that managed the great win only to have to follow it up days later with the game that decides a place in history.

Duke, the team that is trying to throw a wrench into Wisconsin's dream weekend, faced the same situation in 1991, in the same city.

The Blue Devils beat UNLV, another team seeking the perfect season, in the national semifinals. The year before, the Runnin' Rebels beat Duke by 30 points in the title game. The Blue Devils celebrated as the soon as the buzzer sounded. Christian Laettner, Bobby Hurley and Grant Hill were on the court enjoying a moment for a lifetime when reality set in in the form or coach Mike Krzyzewski.

He ran onto the court moving his arms in a "knock it off" motion. There was a title game against Kansas to be played in less than 48 hours.

"When you win a Final Four game, no matter who you beat, it's huge," said Krzyzewski, who is looking for his fifth national championship. "And we're all human beings. You have to fight human nature of wanting to stay in that moment for a little bit longer before moving on to the next moment."

To start our National Championship coverage, we're running out of the tunnel with @BTNLive at 6p ET. pic.twitter.com/kFH6AU3T7E

It's not just basketball either.

In 1980, in one of sports' moments frozen in time, when an entire country confirmed it did believe in miracles, the U.S. Olympic hockey team stunned the world by beating the vaunted Soviet Union in Lake Placid, New York. The celebration of an entire team throwing their sticks and jumping onto a pile in front of the net is frozen in time. But the United States wasn't done. They had to beat Finland two days later. A win meant a gold medal. A loss meant no medal, not even a bronze.

Ryan knows all about that from a player who starred on the team that had been humiliated by the Soviets just weeks before at Madison Square Garden.

"Mark Johnson is the women's hockey coach at the University of Wisconsin. Won a lot of national championships. Great, great teacher, great coach," he said. "I was reminded – I can't tell you by how many people, `Hey, Bo, in 1980, you know after we beat Russia, we had to beat Finland.' I don't know a lot about hockey, but I knew about the `80 team. I said, `You know what, you're right.' Most people think that Russia was the gold medal game. I think it was Finland, wasn't it? I've been reminded on a few text messages that Finland is Duke, both really good teams. Duke is a really good team. I think Finland was a good team because they got to the finals."

Krzyzewski said it's important to make sure the players stay grounded. The anecdotes flow from 24 years ago about Krzyzewski yelling at the team for the way they approached the Sunday practice, that they had already won something besides a semifinal game.

"It wasn't just the emotion in the locker room. I thought we handled that well," Krzyzewski said. "It was the emotion in the hotel, where our fans were literally delirious. It was so packed, they were right next to you. They didn't think we would beat Vegas. We were the ones who thought we could beat Vegas. We had to make sure we didn't go into their environment, into their place."

On Saturday night Wisconsin faced the same problem when the Badgers returned to their hotel. What seemed like thousands of red-clad "Cheeseheads" were waiting in the lobby and anywhere else there was room for a few more people.

"You know you have to forget about the one you just played," Ryan said. "The only thing that's going to help you for that next game is what you learned for the 40 minutes during that (previous) game. Today, when we're at practice, they'll be reminded about a few things from last night, but it will be how we can get better."

Bo Ryan talks with @BTNDaveRevsine & @BTNJimJackson as @BadgerMBB get set to face Duke in the National Championship. http://t.co/JUSM7aAxPy

And how you can make a run at history complete. Duke had Kansas 24 years ago. The United States had Finland in 1980. On Monday night, Wisconsin faces Duke.

A win would mean a place in college basketball history. A loss would mean a win for the ages becomes a footnote.