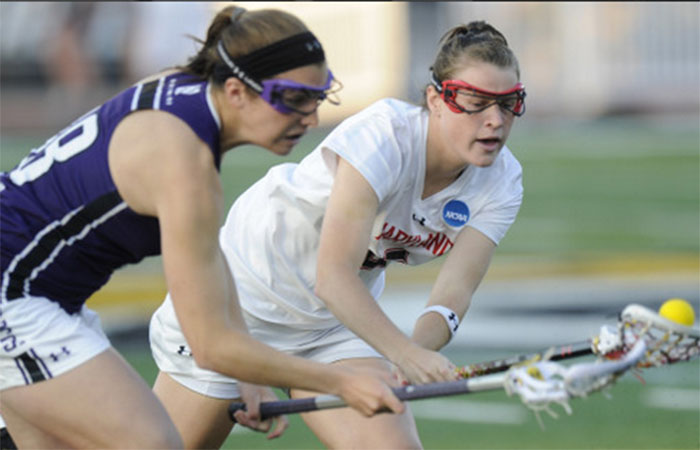 The inaugural season of Big Ten Lacrosse starts this week, and as we prepare for the conference-opening weekend, let?s take a look how the six women?s teams fared during non-conference action.

Don?t forget to check out the BTN TV schedule for lacrosse, as well as the BTN Plus live streaming schedule, too.

The reigning national champion Terps have lived up to expectations through nine games this season. Maryland entered the year with nine preseason All-Americans and 11 of 12 starters back and has rolled through its early schedule. Cathy Reese?s team has defeated four top-15 opponents and its only challenge came from No. 2 North Carolina, and even in that game Maryland had a four-goal lead with seven minutes left.

Last year?s Tewaaraton Award winner, junior Taylor Cummings, has picked up right where she left off, ranking in the Top 30 in the nation in goals, assists, points and draw controls. Cummings continued success was to be expected. The one hole in the lineup was in cage, and Lehigh transfer Alex Fitzpatrick has been up to the task, ranking fifth in the nation in goals against average. The Maryland defense is allowing just 6.78 goals per game this season, which also ranks in the top 10 nationally.

The biggest hurdle between Maryland and a perfect regular season may come on Thursday night in Evanston. Ohio State and Penn State are capable of challenging the Terps but have not shown this season that they can knock off ranked competition, leaving the Wildcats as Maryland?s primary challenger. Thursday will be the first Big Ten conference lacrosse game, and it is certain to have the feel of a championship weekend matchup.

Check out more about the Terps' sweep of the @B1GLacrosse weekly awards here: http://t.co/lUMjJbXmKx #GoTerps

The Wildcats began the season with a thrilling comeback overtime win on the west coast against USC. Freshman Selena Lasota had four goals in her collegiate debut, including the game-winner to lift Northwestern past the Trojans. Despite the win, Northwestern struggled on draw controls, an area that has been one of the program's strengths since its resurrection. Against No. 7 Duke and No. 2 North Carolina, the Wildcats lost the draw battle 32-19 combined and lost both games.

Without NCAA draw control record holder Alyssa Leonard, the Wildcats took time to find success on the circle, but Sunday?s win over No. 5 Syracuse may have been the turning point. Freshman Shelby Fredericks helped the Wildcats to 12-11 advantage on draws, including a 6-2 edge in the second half that lifted Northwestern to a one-goal win. One of the nation?s top draw specialists, Syracuse?s Kaliah Kempney, was limited by Kelly Amonte-Hiller?s team, and Northwestern will look to continue that success in the next two games as it faces two more players ranked in the top 10 in draws this season.

Check out all the detail in each piece of the ?Northwestern Gothic? uni for Thursday?s @B1GLacrosse opener! pic.twitter.com/8NxQGV0XHF

All three of the Nittany Lions' losses have come against ranked opponents: No. 5 Virginia, No. 11 Princeton and No. 13 James Madison. In each game Penn State lost by one goal and was unable to make pivotal plays down the stretch to earn resume-building wins. Missy Doherty?s team has plenty of scoring options and is tied with Maryland in goals per game this season (13.89), but the Nittany Lions are still looking for someone to make those game-changing plays in the final moments.

The bright side is that there will be a number of opportunities during conference play and the Big Ten Tournament to get wins against ranked competition. Led by junior Madison Cyr?s 17 goals, the Nittany Lions have six players with double-digit scores on the season and will be able to keep up offensively with any of the five other Big Ten teams. Senior Maggie McCormick is 14th in the nation in assists per game and will be a crucial part of Penn State?s attempt at a signature win during conference play. The Nittany Lions do not play Northwestern and Maryland until the last week of the regular season but face No. 15 Stanford and No. 18 Ohio State in the next week and a half.

A #B1G addition to the field ahead of today's game vs. No. 9 Stanford. #ThisIsB1G #B1Glax pic.twitter.com/My3sHHYLy8

Coming off its first NCAA tournament appearance since 2003, Alexis Venechanos? team appeared primed to build on that success in the first season of Big Ten lacrosse. However, with only two tough non-conference games on the schedule, it is yet to be seen what this Ohio State team can do. A home loss to No. 14 Stanford and a road setback against No. 18 Notre Dame were close games at half that got away from the Buckeyes in the second 30 minutes.

The pieces are all there for Ohio State, and Friday?s game against Michigan should give the Buckeyes a chance to get back on track before playing ranked Big Ten competition. The Buckeyes have a top feeder in senior Jackie Cifarelli, who ranks fifth in the nation in assists, a top scorer and draw control specialist in senior Katie Chase, who averages three goals per game and is 16th in the nation in draws won, and a top goalie in senior Tori DeScenza, who is allowing eight goals per game this year. Ohio State just needs to put together a full 60 minutes against ranked competition to earn a notable win.

Building a program is always a challenge, but several brutal overtime losses have kept the Wolverines from gaining momentum in their second year as a Division I program. Michigan had a three-goal lead Sunday against Colorado with 1:29 left, before the Buffaloes scored three times in 53 seconds to send the game to overtime; the Wolverines eventually fell in double overtime. It was the third OT loss of the year for Michigan and kept Jennifer Ulehla?s team from carrying a three-game winning streak into Big Ten play.

Michigan has been led by sophomore Anna Schueler on the draw, where she ranks 37th in the nation this season and also has contributed 19 goals. The Wolverines open the Big Ten campaign Friday at Ohio State and that game will be a good assessment of where they stack up against the rest of the conference.

Joining a conference with two of the most decorated programs in the history of the sport was going to be a difficult transition for Rutgers, but, unfortunately, non-conference play also proved to be a tough endeavor. Three one-goal losses and their win over Villanova are the only times the Knights have been within four goals of an opponent this season. Big Ten play could produce similar results.

Senior Lauren Sbrilli has been the go-to player, but Rutgers will need to share the ball and find more scoring options outside of Sbrilli and Kim Kolodny, who has 17 goals on the year. Rutgers ranks last in the Big Ten during non-conference play in goals against average and scoring offense, which makes it difficult to win any league games.