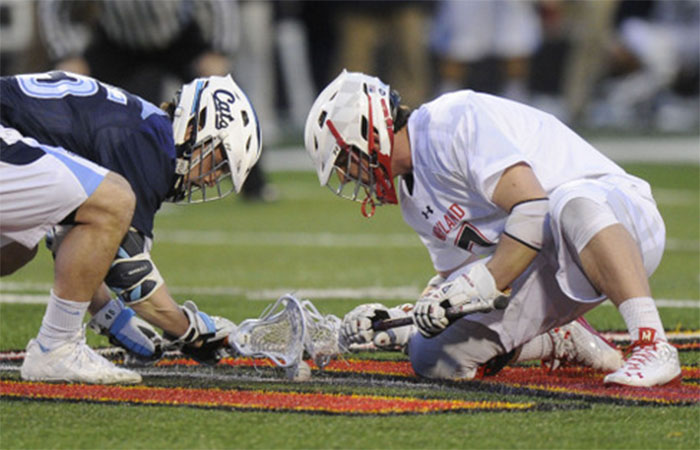 It?s that time of the week to catch up on Big Ten lacrosse teams and look back at how they performed over the weekend. Each week, I?ll be filing my latest "Stick Check" notebook here for the rest of the season.

Here's what you need to know about Big Ten lacrosse.

Ohio State scores the upset
The Buckeyes took down then-No. 3 Denver this past weekend by a count of 13-11. The victory is a huge out-of-conference win for the Big Ten and a big shot in the arm for the league. Wins like this are what will help establish Big Ten lacrosse as a force and help the conference attract top players and draw fans. The Pioneers are an odds-on favorite to get to Championship Weekend and possibly win their first national title.

Coming into the weekend, the Big Ten was just 20-17 out of conference, with the lone Top 10 win coming courtesy of Maryland, when it topped Princeton on March 7. This is Ohio State?s first win over a top 3 team since April of 2013, when it also beat Denver. At 6-2, the Buckeyes were in need of a quality out-of-conference victory, one that could go a long way for a potential at-large berth in the NCAA Tournament should they not win the Big Ten tournament and the automatic qualifier that comes with it.

Hail to the Victors!
It took almost 76 minutes, but Michigan (4-3) defeated St. Josephs on the road by a count of 9-8. The game lasted four overtimes, providing a variety of thrills and drama to those in Philadelphia.

While several Wolverines had strong games, one individual stood out in particular: Attackman Peter Kraus, who bagged the game winner in the fourth extra frame, making the trip back to Ann Arbor an enjoyable one. He also added two assists in the effort.

This three-point performance comes on the heels of a five-point outing last week in a loss to Brown. Kraus has only started two games, but has eight points to show for it. With leading scorer Ian King missing his second straight game Kraus got another opportunity and capitalized. Kraus has truly epitomized the mantra of next man up.

Darcey a bright spot for Penn State
It is never easy to replace an All-American, let alone a four-time All-American goalie in lacrosse. There is nowhere to blend in, nowhere to hide. It?s a lonely position and all eyes are on you. Penn State was faced with this challenge following the graduation of Austin Kaut. Yet Penn State?s redshirt sophomore Connor Darcey has done a good job so far in Happy Valley.

Prior to this season, Darcey had appeared briefly in only two games in his career. Despite the team?s 3-4 record, Darcey has been sharp, saving 55 percent on the season. In losses to Loyola (8-6) and Villanova (11-7), the New England native stopped 14 and 13 shots, respectively. His best performance came in a 12-9 loss to Harvard, when he made 18 saves. If not for his goalkeeping, those contests would have over a lot earlier then they were. Darcey has done a great job of keeping his team in games, giving it opportunities to make plays and get positive results.

Maryland dominates, Hopkins comes close
The Terrapin defense was excellent once again, subduing a potent Villanova offense that had been averaging more than 11 goals per game. The final of 11-2 was impressive on many levels, but the primary reason was the defense being so dominant on the road. Maryland (5-1) has now surrendered just 16 goals in their last four games.

Up north in the Carrier Dome, Hopkins gave No. 1 Syracuse all it could handle before falling, 13-10. The Blue Jays raced to a 5-2 lead after one period and were tied at 10 in the 4th quarter until Syracuse went on a 3-0 run to close it out. Bright spots for Hopkins (3-4) were goalie Eric Schneider (13 saves) and a productive seconnd midfield unit.

Rutgers snaps three-game slide
Hungry for a win, the Scarlet Knights took to the road and grabbed a much-needed victory over Delaware. This was an impressive win for Rutgers (3-5); after a tight first half, the Scarlet Knights put the pedal to the mettle and ran away from the Blue Hens. Scott Bieda and Christian Trasolini combined for nine goals, while faceoff man Joe Nardella was 18-21 at the faceoff and chipped in two goals and three assists. Don?t call him a FOGO!