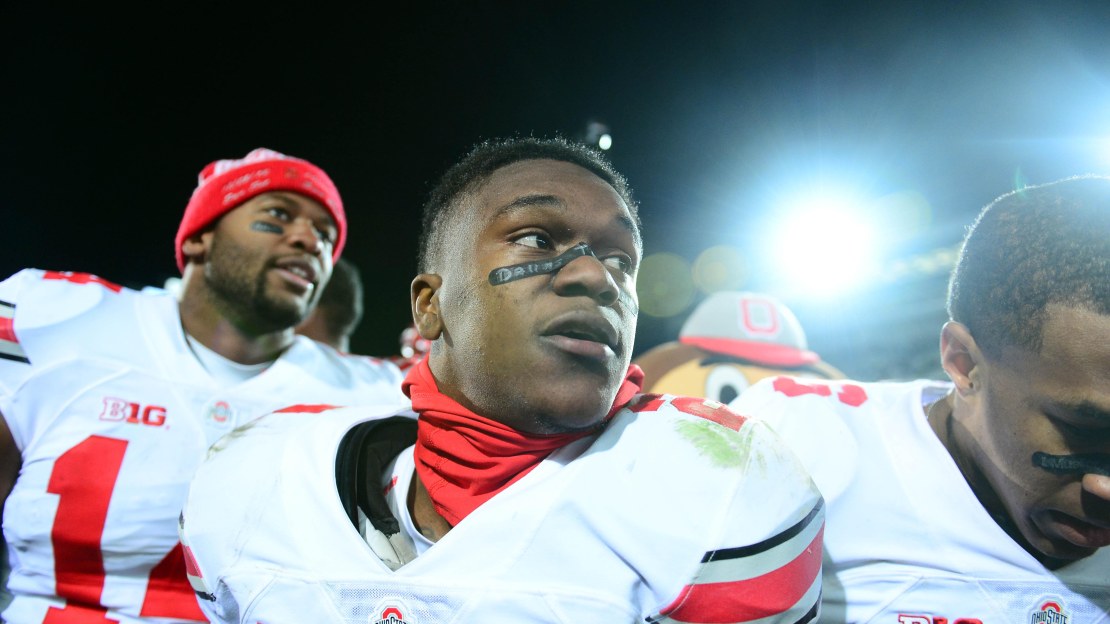 There is a new team atop my latest Big Ten Power Rankings, presented by ArcelorMittal.

And, it's white-hot Ohio State, fresh off its impressive win at reigning Big Ten champ and No. 8 Michigan State.

1. Ohio State (8-1, 5-0). The Buckeyes pushed their winning streak to seven games in impressive style with a resounding win at Michigan State. J.T. Barrett and the Ohio State offense are on fire. Can this team make the playoffs?
Last week: 2
Up next: at Minnesota

2. Michigan State (7-2, 4-1). The defense flopped (568 yards) and Connor Cook was off his game. Add it all up, and the Spartans likely saw their playoff hopes and Big Ten title dreams squelched.
Last week: 1
Up next: at Maryland

3. Wisconsin (7-2, 4-1). The Badgers are rolling, winners of four games in a row behind a defense that?s playing as well as any in the nation. Melvin Gordon is pretty good, too.
Last week: 3
Up next: Nebraska

4. Nebraska (8-1, 4-1). The Cornhuskers were off, giving them a chance to work out kinks on offense while also sizing up the opposition in the West. They had to be impressed with Wisconsin and Minnesota.
Last week: 4
Up next: at Wisconsin

5. Minnesota (7-2, 4-1). The Golden Gophers showed big-time bounce back from a confounding loss at Illinois, coming off a bye week to drum Iowa. Don?t look now, but Minnesota is still tied for first in the West.
Last week: 7
Up next: Ohio State

6. Maryland (6-3, 3-2). The Terps were off a week after their big win at Penn State drew attention for all the wrong reasons. It?s time to move forward. Reminder: Stefon Diggs, the big-play receiver, is suspended for the Michigan State game.
Last week: 6
Up next: Michigan State

7. Iowa (6-3, 3-2). A 51-14 drubbing at Minnesota casts more doubt on this team, which doesn?t look like it?s going to get over the hump. Next week?s trip to Illinois now looks dangerous.
Last week: 5
Up next: at Illinois

8. Penn State (5-4, 2-4). Finally, the Nittany Lions ended a four-game losing skid by winning for the first time since Sept. 20. It seems longer than that. Nonetheless, PSU is still on track for a bowl bid behind a sterling defense.
Last week: 10
Up next: Temple

9. Rutgers (5-4, 1-4). The Scarlet Knights were off, which was good. This team needs to regroup and make a push for a bowl coming off three tough losses to Big Ten powers Ohio State, Nebraska and Wisconsin.
Last week: 8
Up next: Indiana

10. Michigan (5-5, 3-3). The Wolverines gutted out another win, making it three in four games to keep bowl hopes afloat. This team is still fighting despite the tumult it has faced.
Last week: 11
Up next: off; Maryland on Nov. 22

11. Northwestern (3-6, 2-4). The struggles continue for the Wildcats, who have lost four in a row. A bowl game looks like a big long shot, as the offense continues to flounder.
Last week: 9
Up next: at Notre Dame

12. Purdue (3-7, 1-5). The home loss to Wisconsin officially eliminated the Boilermakers from bowl contention. But the progress this program continues to make is tangible.
Last week: 12
Up next: off; Northwestern on Nov. 22

14. Indiana (3-6, 0-5). The Hoosiers? bowl hopes took a big hit with the home loss to Penn State. IU has six losses with games left at Rutgers; at Ohio State; vs. Purdue. The offense is struggling too much.
Last week: 14
Up next: at Rutgers