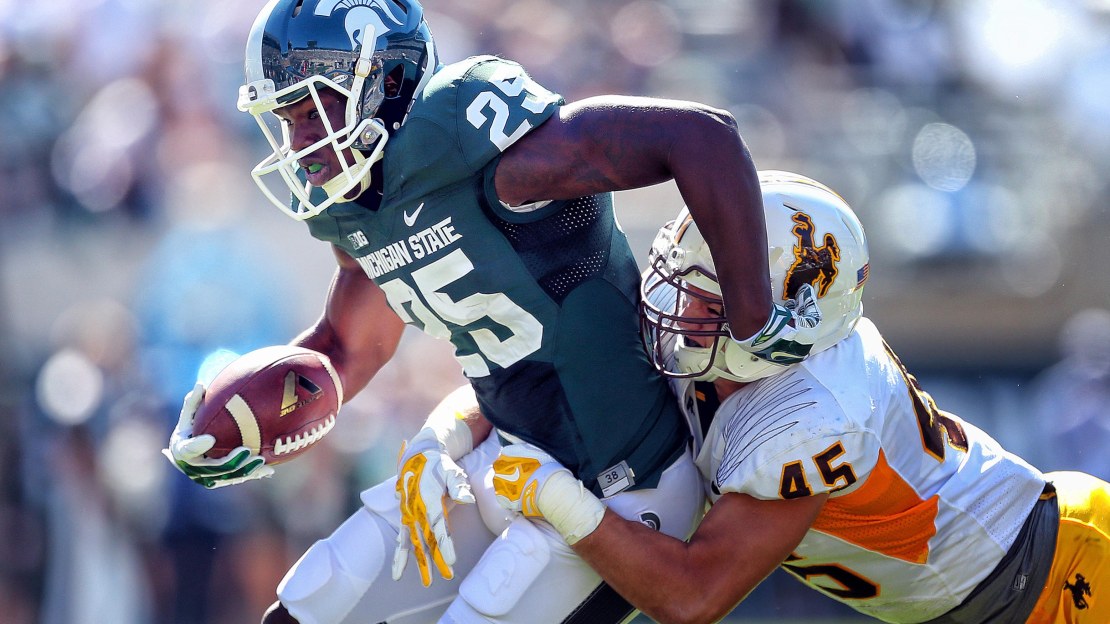 The Big Ten Power Rankings are beginning to solidify, with Michigan State holding steady at the top and Nebraska hot on the Spartans? heels. And those two teams just happen to be meeting this Saturday.

2. Nebraska (5-0, 1-0). The Cornhuskers are playing well on both sides of the ball, but the offense is really flying behind the play of Heisman-worthy RB Ameer Abdullah. This is the Big Ten?s lone unbeaten team.
Last week: 2
Up next: at Michigan State

3. Ohio State (3-1, 0-0). The offense is coming on, as J.T. Barrett continues to get better for an attack that totaled a stupefying 710 yards vs. Cincinnati.
Last week: 4
Up next: at Maryland

4. Wisconsin (3-1, 0-0). The Badgers made another statement that they may be the best team in the West. Still not sure how good Tanner McEvoy is.
Last week: 5
Up next: at Northwestern

5. Maryland (4-1, 1-0). The defense stepped up big for the Terps in their Big Ten opener at Indiana. The offense? It continues to shine. This could be a dangerous team.
Last week: 6
Up next: Ohio State

6. Iowa (4-1, 1-0). The offense continues to show balance with C.J. Beathard at the controls, but the defense won the game at Purdue. The Hawkeyes are a work in progress but are improving.
Last week: 7
Up next: off; Indiana, Oct. 11

7. Minnesota (4-1, 1-0). The Golden Gophers will be a factor in the West, coming off that big win at Michigan. This is one of the most underrated defenses in the Big Ten. And if the offense can get some consistent balance, look out.
Last week: 9
Up next: off; Northwestern, Oct. 11

9. Rutgers (4-1, 0-1). The Scarlet Knights can notch a big win with Michigan coming to New Brunswick on Saturday. Gary Nova must play like he did vs. Tulane.
Last week: 8
Up next: Michigan

14. Purdue (2-3, 0-1). The defense is doing its part. But the offense scored just one field goal in an inept performance. It may be time for a quarterback change.
Last week: 14
Up next: at Illinois