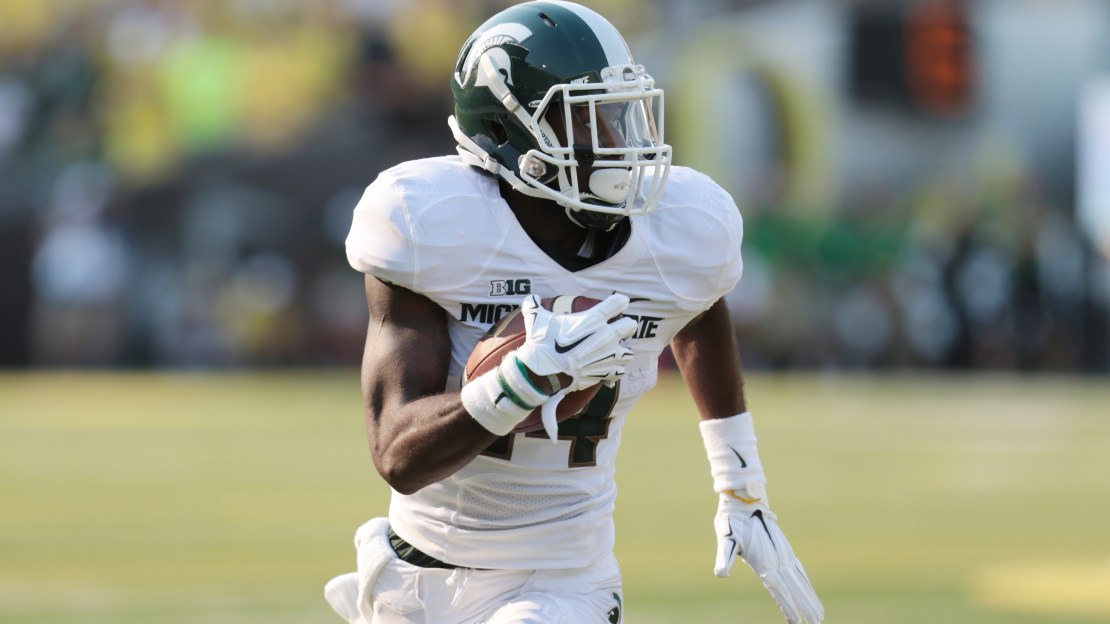 Week 2 is in the books. And, what a crazy week it was. The Big Ten's 8-5 record sent shockwaves across my Power Rankings. The top two remains the same, but it's really anyone's guess after that. The biggest loser? Michigan. Yes, it?s difficult to win in South Bend, Ind. But the Wolverines didn?t just get beat-they got hammered.

2. Ohio State (1-1). The defense is fine. The offense? It?s a work in progress. Redshirt freshman QB J.T. Barrett needs better blocking. And the running backs need to make more plays. If not, this looks like a pedestrian attack in a season that may not reach expectations. Does OSU beat Va Tech with Braxton Miller?
Last week: 2
Up next: Kent State

3. Maryland (2-0). The beat goes on for one of the Big Ten?s biggest dark horses. But the offense needs to show more than it did in a 24-17 win at South Florida. At least Maryland made a play (blocked punt for a TD) when it had to.
Last week: 7
Up next: West Virginia

4. Minnesota (2-0). The Golden Gophers continue to win the old-fashion way: with strong defense and a physical ground game. The passing attack? It still needs work. Minnesota will struggle to leave TCU next week with a win unless the aerial attack picks up. We?re waiting, Mitch Leidner.
Last week: 8
Up next: at TCU

5. Rutgers (2-0). The Scarlet Knights are off to a nice start thanks to a physical offense that has been sparked by QB Gary Nova and RB Paul James. New OC Ralph Friedgen is showing a magic touch. This could be a fun season. This Saturday night should be electric with Penn State in town.
Last week: 10
Up next: Penn State

6. Iowa (2-0). What's going on with Iowa's rushing game? It was supposed to be one of the team's strengths, yet WR Tevaun Smith was the Week 1 leading rusher and QB Jake Rudock held the honors Saturday. With a better ground game, the narrow escapes vs. Northern Iowa and Ball State would have been far more comfortable.
Last week: 3
Up next: Iowa State

7. Nebraska (2-0). Needing a last-minute spectacular catch and run to beat a FCS team at home is no way to inspire confidence. Still, the Cornhuskers are unbeaten and have every right to dream big. A trip to Fresno is followed by a visit from Miami (Fla.). Interesting.
Last week: 4
Up next: at Fresno State

8. Wisconsin (1-1). A nice bounce-back win vs. overmatched FCS Western Illinois. A confidence builder or false-hope builder? Time will tell. But for at least one Saturday, Tanner McEvoy looked like a good quarterback.
Last week: 6
Up next: off; vs. Bowling Green on Sept. 20

9. Penn State (2-0). A methodical home win vs. Akron keeps this team perfect. The play of the defense was impressive. This is one of the most underrated d-lines in the Big Ten. I may have underrated the Nittany Lions. Can?t wait for their game at Rutgers this Saturday.
Last week: 9
Up next: at Rutgers

10. Michigan (1-1). A 31-0 drubbing at Notre Dame has erased any feel-good vibe from that opening victory vs. Appalachian State. Questions abound, especially on offense, for a team that is 3-7 in its last 10 games. How good are the Wolverines? I have no earthly idea.
Last week: 5
Up next: Miami (Ohio)

11. Indiana (1-0). The Hoosiers were off but jump back in with a tough six-game run before a second bye that figures to define their season. There are trips to Missouri and Iowa, as well as a visit from Michigan State. Buckle up, IU.
Last week: 11
Up next: at Bowling Green

12. Illinois (2-0). The first two games haven?t been pretty, as the Fighting Illini have had to mount fourth-quarter rallies vs. FCS Youngstown State and then Western Kentucky (42-34). Illinois scored 21 points in the fourth quarter in each game. Thank goodness for QB Wes Lunt. Is Illinois 0-2 without him?
Last week: 12
Up next: at Washington

13. Northwestern (0-2). An ugly home loss to Cal was followed by a dispiriting 23-15 loss to Northern Illinois in Evanston. To top it off, QB Trevor Siemian left the game with an injured right leg. Is the season already slipping away?
Last week: 13
Up next: off; vs. Western Illinois on Sept. 20

14. Purdue (1-1). Frankly, the Boilermakers did nothing well in an emasculating 38-17 home loss to Central Michigan. Where does Purdue go from here? On top of it all, there may be a quarterback controversy. And the defense is floundering. It?s fair to wonder if this team will win again.
Last week: 14
Up next: Notre Dame (at Indianapolis)