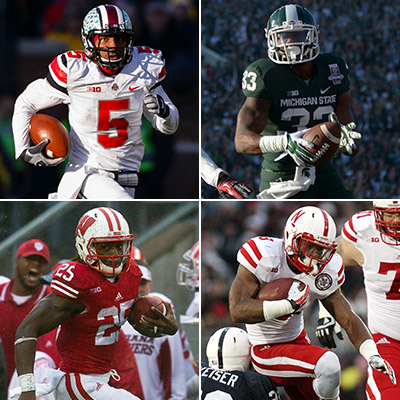 With the College Football Playoff era upon us, ESPN.com decided to assemble a 13-member committee to create its preseason Top 25 Power Rankings. Four Big Ten teams made the list, headlined by Ohio State (No. 6) and Michigan State (No. 7), last year's Big Ten title game participants. Wisconsin came in at No. 17, and Nebraska No. 22.

Here's what they say about the Big Ten teams:

"Urban Meyer has yet to lose a regular-season game at Ohio State, and the Buckeyes are in prime position to extend that streak with 12 starters returning, including Heisman hopeful QB Braxton Miller. They also return my No. 1 defensive line, led by my preseason All-Americans Michael Bennett and Joey Bosa. The schedule sets up nicely too — they avoid the top four teams out of the newly named West (Iowa, Nebraska, Northwestern and Wisconsin), and I have them favored in all but the road trip to East Lansing, which I see as a toss-up."

"Michigan State returns seven starters on offense, led by QB Connor Cook and RB Jeremy Langford, while the defense must replace six starters, including three All-Americans. But D-end Shilique Calhoun, who's on my preseason All-America list, returns and, most important, so does defensive coordinator Pat Narduzzi. If this were last year's schedule, I'd say the Spartans have a clear path to the playoff. Instead, Notre Dame (MSU's only loss in '13) is replaced by a trip to Oregon, where I have Sparty as a two-TD underdog. But Michigan, Ohio State and Nebraska are at home, and I have MSU favored in every game except OSU (toss-up)."

"The Badgers return only three defensive starters from last year, but the inexperienced front seven can learn on the job thanks to a favorable schedule: They avoid Ohio State, Michigan State and Michigan in 2014. I count Wisconsin as a clear underdog in only its season opener, against LSU, with toss-ups on trips to Northwestern and Iowa. But even those two in-conference bouts shouldn't scare Wisconsin. The Badgers beat them 63-15 combined in 2013."

"Bo Pelini has won at least nine games in each of his six seasons in Lincoln. He's also lost exactly four times each season. For 2014, I count the Huskers as underdogs in — surprise — four contests: road games against Michigan State, Northwestern, Wisconsin and Iowa. Still, the line for each is a touchdown or less, and here's a stat worth noting: The Huskers have won nine straight games decided by that margin, most in the country."