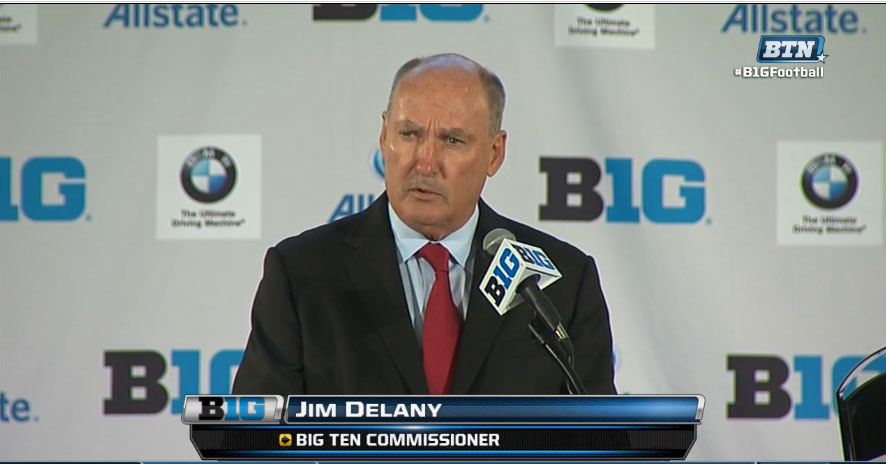 CHICAGO — College sports have been awash in change in recent years. And change isn?t always easy or welcome. But, it?s inevitable for progress to be achieved. It?s an exciting time. And it?s also a time of challenge, as the collegiate model is on the precipice of forever being altered through remarkable NCAA reform-the biggest change of all in these turbulent times of lawsuits, union talk and expansion as leagues position themselves for the 21st Century.

Big Ten commissioner Jim Delany has been a central figure in this coming new-world of collegiate athletics, helping shape tomorrow with other college leaders. Delany discussed the current state of college athletics and the future among other topics today at Big Ten media days.

Amid all the recent talk about money, TV markets, autonomy and such, Delany made sure to emphasize the mission of his schools: education. Some of the Big Ten numbers cited by Delany, who begins his 26th year at the helm of the Big Ten:

?We have athletic and academic quality and scale,? said Delany, who notes that the Big Ten has the highest-average APR in FBS.

"Some student-athletes are more interested in school than others. That doesn?t change our mission: to build and sustain a structure that gives every student-athlete the opportunity to obtain a quality education. Our mission is to educate."

The Big Ten also has carried its weight on the fields of play, winning seven national titles last year in a conference that has 350 teams, 42 sports and 28 championships. And many of those teams and games are aired on BTN, which now reaches 60 million homes and is in 19 of the top 20  markets available globally.

And this is an historic season and one of the biggest yet for the conference, as the Big Ten has made a bold push east with the additions of Rutgers and Maryland becoming official this summer. That grew the Big Ten to 14 schools that will compete in divisions now aligned geographically.

The expansion pushed the Big Ten into two large media markets while adding schools that fit the conferences academic profile. The potential is intriguing and exciting.

?We continue to work to become part of these (new) communities,? said Delany. ?There is great anticipation in both areas before a game ever is played.?

Johns Hopkins also is aboard as the conference?s first sports affiliate member, taking part in men?s lacrosse. Other new developments include the opening of a New York City Big Ten office and a satellite office in Washington, D.C. Delany also announced in May the formation of the Gavitt Tipoff Games with the Big East, as well as the that the 2017 Big Ten basketball tournament will be played in Washington.

NCAA reform is another topic Delany addressed. The Big Ten is one of five ?Power Conferences? along with the SEC, ACC, Big 12 and Pac-12 that is pushing for autonomy. That autonomy would allow for the bigger schools to provide their athletes with some common-sense benefits that they previously could not because of NCAA rules. Some of the reforms the Big Ten and other ?power? conferences would like include cost-of-attendance scholarships, guaranteed four-year scholarships, long-term medical coverage and an educational trust. The autonomy issues will be put to vote by the NCAA on Aug. 7.

?We are in a period of dynamic change and transformation, but I couldn?t feel any better about our colleagues in the Big Ten and all the other conferences, as well,? said Delany, who expects the key on-going legal battles (like O?Bannon, Kessler) ultimately to end up in the Supreme Court. ?Everyone is working really hard. We created a college football playoff, NCAA restructuring plan, student-athlete reform agenda, and our presidents articulated very important ideas.

?As an industry, we have proven many times that we are equal to the task and feel good about where we are headed.?

When it comes to discussing NCAA reforms, Delany emphasizes the connection to education.

?I?m not sure where there has been a disconnect, (reform and education) always have been inextricably linked for us,? said Delany, who also addressed NCAA reform at last year?s Big Ten media event.

?We have heard of several conferences supporting cost of education. Why the cost of education? Because it ties directly to education. That is what the collegiate model is all about. Education differentiates us from professional sports, Olympic sports and other sports models.?

Delany also talked about the changing college football postseason, as a new four-team playoff kicks off this season. The league also has a reshuffled bowl lineup that stretches from coast to coast.

?We have a national slate of bowls,? said Delany. ?We will have bowls in Texas, Florida, Tennessee, Arizona, California, Georgia, Louisiana, Detroit, New York.?

And the process for selecting teams also has been altered.

?Before it was selected by the bowls,? said Delany. ?Going forward, it will be conservation and collaboration requiring conference approval. We are looking to create the best possible matchups with diversity over several years for our teams, coaches and fan bases.?

Delany is pleased with how the Big Ten is positioned for the coming playoff. Strength of schedule for the league should be strong in future years as the league moves to a nine-game conference slate in 2016 and teams phase out games vs. FCS foes and commit to playing at least one game vs. a team from a ?power? league. The league title game also will be an asset.

?No other league will have all of these pieces,? said Delany. ?And this seems to me that it positions us in the best possible way for the coming college football playoff.?