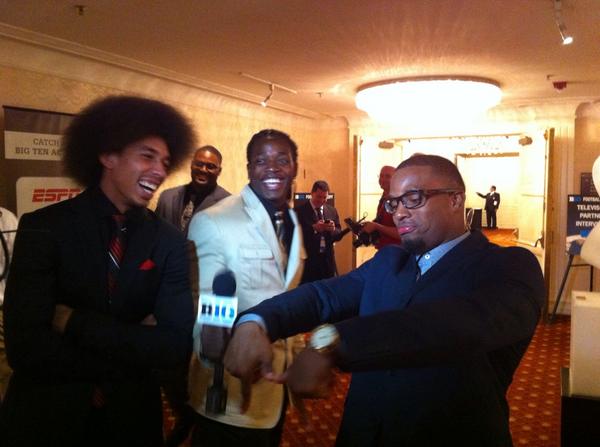 Ask anyone, and he or she will tell you the Big Ten is stacked at running back. Ask those same people, and they will say Nebraska's Ameer Abdullah and Wisconsin's Melvin Gordon are at the top of the deep talent pool.

Who's the best, though?

"He is," Abdullah said, pointing to Gordon.

It's a close race, let's put it that way. Abdullah led the Big Ten in rushing yards (1,680) last season, just 81 yards ahead of Gordon.

"It's truly a blessing to be regarded as one of the best backs in the Big Ten," Abdullah said. "Coming out of high school, I never thought it would be me."

There's a good chance Abdullah and Gordon will be battling for the rushing title again in 2014. And, yes, they will have their eyes on the box scores.

"Last year, I tried not to watch (the rushing leaderboard) early in the season," Abdullah said. "When I took the lead midway through the season, I was like, Melvin plays later, let's see what he rushes for."

But, again, the Big Ten is stacked at running back, so Abdullah and Gordon may have several other names to track. One player both agreed on was Indiana's Tevin Coleman.

"He is one of my favorites," Gordon said." People are going to hear a lot more about him this year."

Entering the season, though, it's a race between Abdullah and Gordon. For the curious minds, Michigan State's Jeremy Langford (1,422) is the Big Ten's next returning leading rusher.