Dienhart ranks his B1G favorites for every award 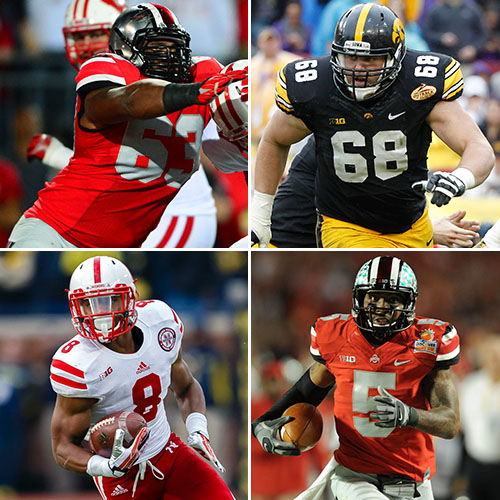 America is awash in names, as the official ?watch lists? have been revealed for the major college football awards. Who will win the Doak Walker Award? The Butkus Award?

Here are my top three Big Ten picks for each bauble.

CAMP/MAXWELL (Player of the Year)
1. Braxton Miller, QB, Ohio State. The dynamic Miller is the quintessential big play waiting to happen. His passing continues to improve, but Miller?s best weapon always will be his feet. No offensive player is more feared.
2. Connor Cook, QB, Michigan State. An underrated athlete, Cook showed moxie in taking over the job last year. He has command of the offense as he looks to improve his passing and big-play skills.
3. Melvin Gordon, RB, Wisconsin. A threat to score each time he touches the ball, Gordon notched 1,609 yards rushing last season. Lack of proven wideouts may cause the Badgers to lean heavily on Gordon this fall. And that?s not a bad thing.

NAGURSKI/BEDNARIK (Defensive Player of the Year)
1. Michael Bennett, DT, Ohio State. Not only is he productive, but Bennett also is a leader as the son of two West Point graduates. He has 11 career sacks and 17.5 tackles for loss.
2. Randy Gregory, DE, Nebraska. The 6-6, 240-pound Gregory finished 2013 with 10.5 sacks for 69 yards in losses and was in on 19 tackles for loss, totaling 101 yards. Gregory had at least one sack in seven of the final eight games.
3. Shilique Calhoun, Michigan State. The quintessential playmaker, Calhoun led MSU with 7.5 sacks and ranked second with 14 TFLs in 2013. And his three TDs led the nation among defenders.

O?BRIEN (Quarterback)
1. Braxton Miller, QB, Ohio State. There is no more dynamic weapon in America, as Miller can be a one-man-gang. The two-time Big Ten MVP is looking for his first Big Ten title.
2. Connor Cook, QB, Michigan State. He has gone from backup to reigning MVP of the Big Ten title game and Rose Bowl. Now, he?s looking to become more of a playmaker.
3. Christian Hackenberg, QB, Penn State. He lived up to the hype as a true freshman. Is there a better pure passer or pro prospect in the Big Ten? Nope. He could be a future No. 1 overall draft pick.

DOAK WALKER (Running back)
1. Ameer Abdullah, Nebraska. He almost turned pro but is back in Lincoln looking to be the first Cornhusker back to notch three 1,000-yard seasons. Don't bet against him.
2. Melvin Gordon, Wisconsin. One of the fastest players in the Big Ten, Gordon is an explosive weapon who averaged 7.8 yards per carry last season.
3. Tevin Coleman, Indiana. I like MSU's Jeremy Langford and Minnesota's David Cobb, but I think Coleman is better. He is a jack-of-all trades back who missed the last three games of 2013 with injury but still had 958 yards rushing.

BILETNIKOFF (Wide receiver)
1. Stefon Diggs, Maryland. Even though he missed six games with a broken leg, Diggs earned honorable-mention All-ACC honors. He is a big, physical target who can go get the ball.
2. Devin Smith, Ohio State. He has shown big-play skills and is looking to become a compete wideout. Don?t bet against him. The Buckeyes need to stretch the field; Smith is the guy to do it.
3. Shane Wynn, Indiana. The diminutive speedster has 133 career receptions for 1,490 yards and 17 TDs. If defenses crowd the line to slow RB Tevin Coleman, Wynn can make them pay by going deep.

BUTKUS (Linebacker)
1. Taiwan Jones, Michigan State. The 6-3, 252-pound Jones takes over for Max Bullough. Jones has the frame to control the middle, and his intangibles are emerging, too.
2. Jake Ryan, Michigan. He didn?t play until the sixth game in 2013 as he recovered from an ACL injury. Ryan is the quintessential playmaker who plays like his hair is on fire.
3. Mike Hull, Penn State. The quiet leader still ranked second on PSU with 78 stops in 2013 even though he missed two games and parts of two others with a knee injury.

LOMBARDI (Lineman/linebacker)
1. Brandon Scherff, OT, Iowa. A former high school quarterback, Scherff is a freakish combination of size, strength and athletic ability who would have been a first-round pick had he entered the 2014 draft.
2. Michael Bennett, DT, Ohio State. He?s the lynchpin of one of the best d-lines in the nation, notching seven sacks last season from his tackle spot. A true difference-maker.
3. Randy Gregory, DE, Nebraska. A lithe and explosive athlete off the edge, Gregory had an instant impact upon arriving from a JC and led the Big Ten with 10.5 sacks.

MACKEY (Tight end)
1. Jesse James, Penn State. The 6-7, 257-pound James is the complete tight end, as he is equally adept at blocking as he is catching. He has eight career TD grabs among his 40 catches.
2. Jeff Heuerman, Ohio State. He?s an emerging weapon who is coming off a spring foot injury. The 6-5, 255-pound Heuerman is a deadly red-zone weapon who moves the chains.
3. Tyler Kroft, Rutgers. The 6-6 Kroft has some of the best hands among all Big Ten tight ends, pacing the Scarlet Knights with 43 catches for 573 yards last year.

OUTLAND (Interior lineman)
1. Brandon Scherff, OT, Iowa. The big fella looks to be the fourth Hawkeye o-lineman picked in the first round since 2004, joining Robert Gallery, Bryan Bulaga and Riley Reiff.
2. Rob Havenstein, OT, Wisconsin. At 6-8, 327 pounds, he?s the ultimate sun blocker and chief escort to the Badgers fleet of top-end backs.
3. Michael Bennett, DT Ohio State. At 6-2, 288 pounds, Bennett is quick off the ball and the ultimate disruptive force from the interior. He excels at splitting the double-team.

RIMINGTON (Center)
1. Jack Allen, Michigan State. He?s a tough, physical blocker who plays with the intensity and passion of a defensive lineman.
2. Dan Voltz, Wisconsin. A rising young star, Voltz is a powerful blocker at the point of attack for another strong Badger line.
3. Tommy Olson, Minnesota. The Gophers have one of the most physical and successful running games in the Big Ten. And Olson is a reason why. He gets a push and rarely goes backward.

JIM THORPE (Defensive back)
1. Ibraheim Campbell, Northwestern. One of the better safeties in the nation, the physical Campbell has eight career picks and 262 tackles. He loves to hit.
2. Blake Countess, Michigan. A true ball hawk who can play the run, Countess had six interceptions last season.
3. Trae Waynes, Michigan State. With Darqueze Dennard gone, Waynes becomes the Spartans? shut-down defensive back from his boundary corner spot.

GROZA (Kicker)
1. Brad Craddock, Maryland. The Australian converted 21-of-25 field-goal attempts in 2013, showing consistency and a nice leg.
2. Michael Geiger, Michigan State. He lived up to his hype as the nation?s top prep kicker by nailing 15-of-16 field-goal attempts. And he was 8-for-8 from between 40-49 yards.

GUY (Punter)
1. Mike Sadler, Michigan State. He averaged 42.5 yards per punt and paced the nation in punts downed inside the 10-yard line, showing a big leg and touch.
2. Cameron Johnston, Ohio State. The Aussie with the rugby style averaged 44 yards per boot last year. He?s only getting better.
3. Peter Mortell, Minnesota. He emerged from nowhere to be one of the Big Ten?s best, averaging 43.3 yards per punt in 2013. He can flip the field.