Adreian Payne prepares for his next life journey 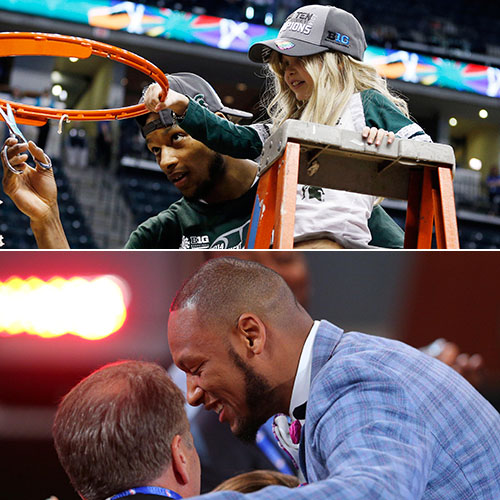 There is a rubber bracelet that rests on Adreian Payne?s wrist, small in size, but monumental in importance. The words ?Love Like Lacey? printed across the front of the band, in honor of the late Lacey Holsworth, who lost her battle with cancer just three months ago.

The loss has been challenging for Payne, which is why he has made a vow to always keep a piece of Lacey with him at all times. The bracelet, which is purple in honor of Lacey?s favorite color, serves as a reminder of a young girl who Payne refers to as ?his angel.?

?That?s how I always describe her,? Payne said. ?Her laugh? Her smile? It?s contagious. She made others laugh and smile from just being around her.?

?She?s an angel from God that touched people?s lives.?

Lacey?s passing is one of many extreme challenges the 23-year-old Payne has endured throughout his life. An only child, Payne was raised by his late grandmother after his mother, Gloria, passed away when he was just 13 years old. His father, Thomas, was incarcerated from 1996-99 on drug charges. Thomas? involvement in Adreian?s life grew after Gloria?s passing, but it was still challenging for the youngster, growing up in Jefferson Township, Ohio.

To say that the odds have been stacked against Payne throughout his young life would be an understatement, and he is the first to admit that.

?I?ve been through a lot in my life, but I?ve just tried my best to learn from every experience I?ve been through,? Payne said. ?It takes a lot of hard work and maturity. I?ve just had to mature faster in a short amount of time.?

All of that hard work and maturity paid off with the ultimate reward this past June as Payne?s dream of playing in the NBA came true. The former Spartan standout was selected with the No. 15 pick by the Atlanta Hawks in last month?s NBA Draft, making him the highest draft pick to come out of Michigan State since Jason Richardson went No. 5 overall back in 2001.

It?s a monumental moment in a tale that everyone can?t help but to root for a storybook ending. Being drafted in the NBA may be a new lifestyle change for Payne, but it certainly hasn?t altered his sense of perspective.

He is well aware of how he got to this point, and has a clear understanding of what he needs to do in order to succeed in the next journey of his life. In fact, Payne plans to take the same approach with his next life journey as he did the first - Work hard. Don?t stop. Don?t give up. Don?t let something beat you.

?That?s what I tell myself every time I look down at that bracelet on my wrist,? Payne said. ?It teaches me to fight just like Lacey did and always persevere through things, even if it?s tough.?

Payne?s immediate family may not all be there to watch him throughout his next journey, but that doesn?t mean he lacks support and love. He made it a point to invite both of Lacey?s parents, Matt and Heather Holsworth, to be by his side at the draft, something he had been planning to do for months in advance.

?One of my goals was to go in the first round and be in the green room, and I knew it would make her parents proud to be there and experience that with me,? Payne said. ?They took me in as part of their family, not because I play basketball, but because the type of person I am.

?They always tell me basketball doesn?t make you, the person does, and don?t ever shy away from that.?

The Holsworths were there for Payne?s graduation, as well, and they have made it a point to be by his side as he prepares for his career ahead.

?We?ve talked to him, FaceTime, text, phone calls, and we just tell him to have fun with the process,? Matt Holsworth said of Payne. ?He?s an incredible kid and he?s got a great heart.

What makes Payne?s journey to the NBA even more remarkable is how rare it is to see a player in his position go on to be a high NBA Draft pick, especially in this day and age.

Payne was a senior star when he left Michigan State. Those two words, in college basketball, go together about as often as ?potato chips? and ?low cholesterol.?

?I told myself, there?s no need to be in a rush to leave school early because the NBA isn?t going anywhere,? Payne said. ?If you continue to work on your game, and if school is important to you, then you will succeed in basketball.?

Making the decision to return for his senior year was not an easy one for Payne. Pegged by many to be an early first-round draft selection, Payne was faced with the dilemma of making the jump to the NBA, or returning for his fourth year and receiving his diploma, something he promised his grandmother he would do.

?It was important for her because she wanted me to be successful and have something to fall back on in case basketball didn?t work out,? Payne said. ?I remember when she talked to Coach Izzo, she told him to take care of her baby or else she?s going to get after him.?

Payne?s decision to return paid off in a big way. He went on to lead the Spartans to a Big Ten Tournament championship and an Elite Eight appearance, all while averaging a career-high 16.4 points per game.

But even more important than Payne?s impressive stat line, was the maturity and leadership qualities he developed while returning to East Lansing for his senior season.

?He?s 10 times more mature than he was,? Izzo said of Payne following the draft. ?The decision to come back and be a top-15 pick was a good one for him.?

As we see in today?s college basketball world, so many players never get the chance to develop those leadership qualities throughout their time in school. But for Payne, it was different, and he has many people to thank for that, including Izzo.

?He tried to put me in the best possible situation,? Payne said of Izzo. ?After making that decision, I never once looked back and said, ?Shoot, I should have left after my junior year.? I was confident in my choice to come back to school, and in the end, it made everything better anyway.?

Returning for his senior season, receiving his college degree and completing his dream of being drafted in the NBA has given Payne a true sense of satisfaction and accomplishment.

He has also given inspiration to others around him.

?He?s very goal-oriented and he knows exactly what he wants in life,? Matt Holsworth said. ?I always told him that if he truly wants to play in the NBA one day, he will. Whether that was going to be this year, or next year, it?s going to happen if he puts his mind to it. If he was meant to play in the NBA, he will.?

Payne is quick to point out numerous people - family, friends, coaches, former teammates - who congratulated him after completing his dream of being selected in the NBA Draft.

One name he singled out was former teammate and 2012 Big Ten Player of the Year Draymond Green. A second-round draft selection just two years ago, Green did not get the opportunity to enjoy the green room experience, something that Payne wanted to share with his close friend.

?We are very close, so it was special for me to be able to share that moment with him,? Payne said. ?I was able to make one of his dreams come true.?

Once he gets settled into his new home in Atlanta, Payne plans to pick Green?s brain and gain some tips about life as a rookie in the NBA. For now, he?s still trying to just let everything soak in.

?It really feels like I?m not even here right now. It just hasn?t really hit me yet,? Payne said. ?I think it?s really going to hit me when I start playing and once I put on that jersey.

?Right now, I?m just trying to take it all in, continue to get better, and work on my game so I can play at the highest level I can when summer league starts.?

Payne will compete on the Hawks? summer league team, which is set to play its first game July 12 against the Washington Wizards. That will be the first step in the next phase of Payne?s basketball career, one that he hopes will be both long and successful. A career that he insists wouldn?t have been possible without the help, love and support of so many people - including Lacey.

?She would have loved to have seen me get drafted. I can just picture her screaming and clapping her hands,? Payne said. ?Knowing her, she probably would have wanted to go up there on stage with me.?

As he pauses in between words, Payne takes a deep breath before letting out a laugh. It?s the type of laugh that can brighten someone?s day, just as Matt Holsworth described.