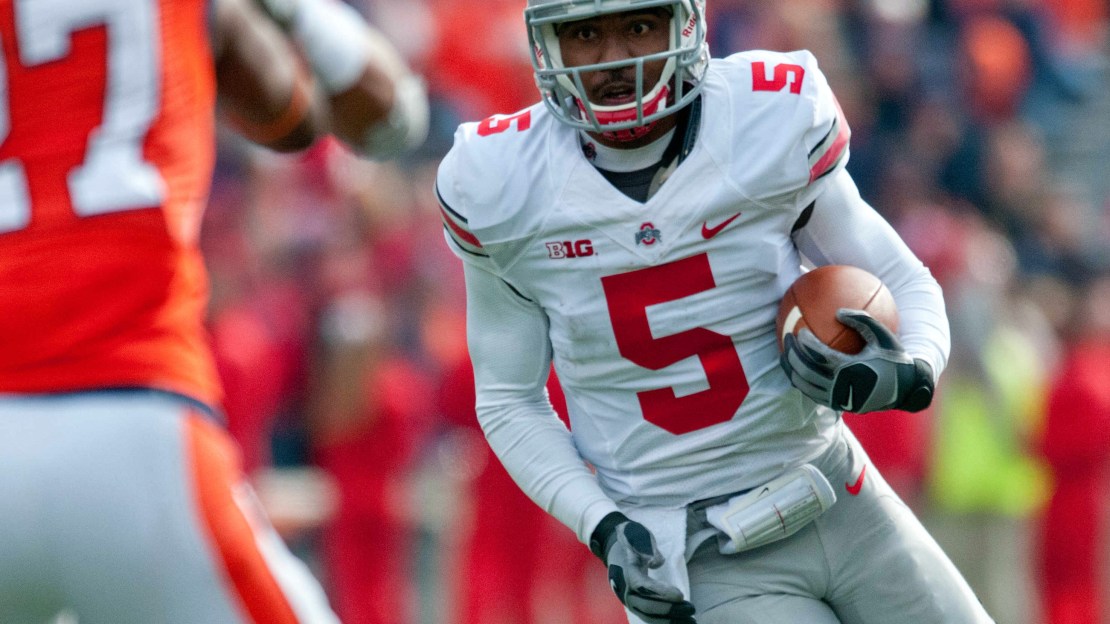 NFL.com continues to churn out its 14 for '14 lists, and it was the nation's top 14 Heisman Trophy candidates turn Monday. Braxton Miller led a quartet of Big Ten representatives, at No. 3, behind reigning Heisman winner Jameis Winston and Oregon's Marcus Mariota. See NFL.com's Big Ten Heisman contenders list in this post.

"Miller performed at a high level in the second half of the season, showing he completely had adapted to the version of the spread offense favored by coach Urban Meyer. But he missed two games and almost all of another with a knee injury, which kept his numbers down. Miller must become a more refined passer, and he made strides in that area last season. A season with 2,500 passing yards and 1,000 rushing yards, with a combined 40 TDs? That's a legitimate possibility, and those kinds of numbers will get him to New York at the end of the season."

"Gordon's production dropped in the second half of the 2013 season. He rushed for 100 yards six times in the first seven games, but reached that plateau just twice in the final six games. And of his 12 TDs, only one came in the final six games. Even though he shared carries with the now-departed James White, he still seemed worn down a bit in the latter part of the schedule. Gordon will be the unquestioned No. 1 tailback for the Badgers next season and his explosiveness can't be overstated. While he needs to become a more well-rounded tailback (he has just three receptions in two seasons and also is an iffy blocker), an 1,800-yard season seems like a legit goal."

"He quietly led the Big Ten in rushing yardage last season and also is a solid receiver. Nebraska's offensive line had some issues last fall, and presuming that unit is a bit better this season, Abdullah would seem to have legitimate 1,800-yard potential. There are two issues: He's had fumbling problems and backup tailback Imani Cross is a punishing runner who often is called upon in short-yardage situations at the goal line (Cross had one more rushing TD than Abdullah last season — even with almost 200 fewer carries)."

"Langford will be the bell cow for the Spartans' offense. QB Connor Cook could have a big 2014, but Langford still will be the focal point of the offense for coach Mark Dantonio, who loves to win with defense and a punishing ground attack. Langford led the Big Ten in carries in 2013 despite not starting for the first month of the season."

Four out 14 — not bad for the Big Ten. Miller figures to be a top Heisman candidate across all the publications, while Abdullah and Gordon should enter the season in the discussion.

I'm mildly surprised Gordon lands two spots ahead of Abdullah, the Big Ten's leading rusher last season. Abdullah was a consistent beast last season, and he could benefit from more stability at quarterback this fall. Either way, both backs are great and worthy of their standing.

It's great to Langford getting love here. I'm not sure everyone understands how great he was last season (1,422, 18 TD).