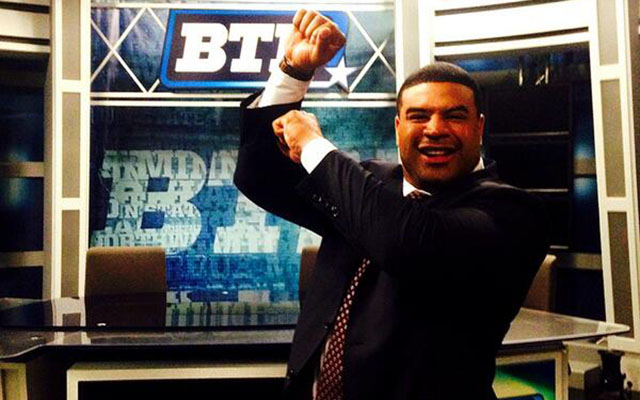 BTN had a distinguished visitor Wednesday, as former Maryland and NFL star Shawne Merriman visited our headquarters. Merriman starred for the Terps from 2002-2004, earning All-ACC honors in his final season, and went on to lead the NFL in sacks (2006) and be a three-time All-Pro. See our Q&A with Merriman in this post.

BTN.com: For our fans who may not know, how did you get the nickname "Lights Out?"
Shawne Merriamn: My sophomore year in high school, I knocked out four guys in one game. I had parents come in and protest that I should not be on the field with their kids, and that's when I got the nickname. I kept it through college and the pros.

BTN.com: How did your dance come about?
SM: I got a switch on my right forearm, and my freshman year, we were playing Georgia Tech, and I knocked out a wide receiver coming across the middle. I stood up on ESPN and started flipping the switch. Ralph Freidgen, the coach at the time, yanked me out of the game for flipping the switch over the guy I knocked out. But the crowd went crazy, and that's when I knew that was it.

BTN.com: You were heavily recruited out of high school, so what made you stay in state and pick Maryland?
SM: Basically, friends, family and my high school coaches. The Boys and Girls Club, the pee-wee league coaches, no one was about to let me leave. I was playing in my own backyard, so I didn't want to leave.

BTN.com: When you think Big Ten football what do you think?
SM: Playing on the grandest stage you can. Football doesn't get any bigger on that stage – it's the biggest stage in all of college football. You look at the teams and the history, it doesn't get any better.

BTN.com: What was your first reaction to Maryland moving to the Big Ten?
SM: I was shocked. Being in the ACC for 60 years and leaving the conference, I didn't understand it. But then I started understanding where we were going. We weren't going to any conference, we were going to the Big Ten, which was huge. Not just for Maryland football, right now, but for the recruits going forward.

BTN.com: What was your best memory at Maryland?
SM: The best memory at Maryland would be when I was named to the (2004) All-ACC team. I didn't start my first two years. I was playing a position I never played before. I always played middle linebacker my whole life, and they put me in a pass-rusher position. I was second in the ACC in sacks off the bench, but they wouldn't name me All-ACC because I wasn't starting. So, when I finally got a chance to start (as a junior), I was named to the team, and it was special.

BTN.com: Which former Maryland teammate do you keep in touch with the most these days?
SM: So many of them. So many, we're talking about like 20 guys. I was just talking to Vernon Davis before I came here. Once you're a part of that Terp family, you're there forever.

BTN.com: Who's the better athlete: You or Vernon?
SM: Vernon is. He runs a 4.4. He's still not stronger than me and he still can't block me, either, but when you talk about the most freakish athletes, not just between me and him, but of all time, he's that kind of athlete.

BTN.com: I'll leave you with this: What is your best NFL memory?
SM: Probably Monday Night Football vs. the Raiders. I had 4.5 sacks on Monday Night Football, the first game of the year. I just remember after that game, the people just started talking about how I was one of the best at that position.