Dienhart: Your team's best chance to pull an upset 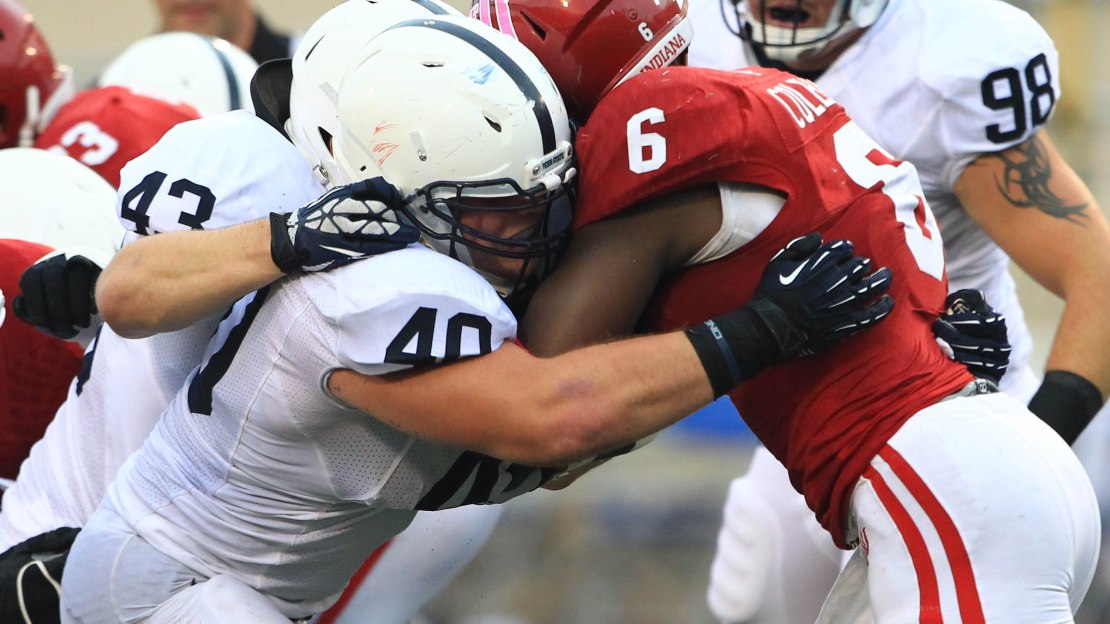 We continue our football schedule preview series to help pass some of the time before the 2014 season kicks off. Today, it?s time for Tom Dienhart to offer his super-early upset pick for all 14 Big Ten teams. See your team?s upset prediction in this post.

ILLINOIS
Hard to say what teams will look like by November, but Illinois could have a shot to dump visiting Penn State on Nov. 22. The Nittany Lions? thin roster could be depleted for a squad that possibly may be playing out the string under first-year coach James Franklin. And the Illini could be making a bowl push. Hey, it?s a long shot ? but it could happen. But know this: PSU has won the last two meetings by a combined score of 59-24. Illinois came close to winning last year in State College, falling 24-17.

INDIANA
Circle Nov. 1. That?s when Indiana plays at Michigan. Yes, Indiana has lost 18 in a row to the Wolverines and 33 of 34. The lone IU win was in 1987. But the Hoosiers have made the Wolverines sweat the last three meetings. Indiana could stun Michigan in the Big House if Kevin Wilson?s squad can make the game a shootout.

IOWA
It?s difficult to imagine Iowa being an underdog in many games this season. It could be when Nebraska visits to end the season. A key for the Hawkeyes will be having a balanced offense vs. what should be a good Cornhusker defense. How will the passing game look by late-November? Fascinating.

MARYLAND
Maryland may be able to ambush Penn State when it visits State College, Pa., on Nov. 1. The Nittany Lions? thin roster may be compromised late in the season. And Penn State will be coming off a visit from Ohio State. Plus, you know Maryland will be hyped to beat a Penn State program that it?s 1-35-1 against.

MICHIGAN
Michigan could win at Ohio State in the season finale on Nov. 29. It?s a rivalry game. And, we all know what can happen in those. Plus, Hoke may be coaching for his job. Still, the Buckeyes have dominated this series of late, going 11-2 vs. the Wolverines in the last 13 meetings. When did Michigan last win in Columbus? It was the 2000 season, when John Cooper was the Ohio State coach.

MICHIGAN STATE
The only time Michigan State may be an underdog is when it plays in Eugene vs. Oregon on Sept. 6. The Ducks figure to be a consensus top-five team in the preseason headed by Heisman contending quarterback Marcus Mariota. This will be a deadly team that has nine offensive starters back. Will a Michigan State defense with six new starters be ready? If so, MSU could return home with a big win and lots of confidence.

MINNESOTA
Minnesota could bring home Floyd of Rosedale when Iowa visits the Twin Cities on Nov. 8. No doubt, a win vs. the Hawkeyes would give Minnesota needed mojo as it embarks on a monster November. Minnesota will be helped by a bye the week before Iowa?s visit. Can the Gophers? match the physicality of the Hawkeyes?

NEBRASKA
Nebraska can storm into Wisconsin and knock off a Badgers squad that has issues. The Badger defensive front seven is being overhauled, and questions loom at receiver. And is Joel Stave the answer at quarterback? By the time these teams meet on Nov. 15 in Madison, these issues may be moot and the Badgers could be humming. But the Nebraska defense also may be in top form backed by a power offense led by Ameer Abdullah.

NORTHWESTERN
Nebraska should be favored when it visits on Oct. 18. And if the last three games are any indication, this clash should be memorable. The Wildcats rallied for a 28-25 win in Lincoln in 2011. The Cornhuskers returned the favor in 2012 with a stirring 29-28 comeback in Evanston. Last year, Nebraska won on a last-second Hail Mary. No doubt, Northwestern doesn?t fear the Huskers and has lots of talent back from a team motivated to rebound from a disappointing 2013.

OHIO STATE
Ohio State won?t be an underdog often. In fact, it may only happen when the Buckeyes play at Michigan State on Nov. 8. The Spartans have won two of the last three in the series after losing seven in a row to Ohio State.

PENN STATE
The Nittany Lions may be able to pull off a prime-time stunner in Ann Arbor on Oct. 11 vs. a Michigan team that has some issues to sort out. If the Wolverines are struggling along the offensive line again, the offense could be as spotty as it was in 2013. And Penn State has a chance to be strong on offense if its front emerges, as Christian Hackenberg looks to be the top passing quarterback in the Big Ten. The Nittany Lions won the last time they visited Ann Arbor in 2009.

PURDUE
Purdue won?t be favored in many games-maybe just three. So, there will be plenty of chances to pull upsets. The best may be when the Boilers go to Illinois, which won an ugly game in West Lafayette last season - the Illini?s lone Big Ten win the last two seasons. Purdue won the last time it visited Champaign in 2012. In fact, the Boilers have won three of their last four trips to Illinois.

[ MORE: Purdue to put students on helmet for game vs. Iowa ]

RUTGERS
Rutgers could stun Maryland when it visits College Park in the season finale on Nov. 29. This could be a de facto bowl for the Scarlet Knights, who may be able to let it all hang out and just play loose and pressure-free in a battle with a fellow Big Ten newbie. These schools last played in 2007 and 2009, with each winning on the road. The Terrapins may be battling for a bowl bid, so they could have a lot to fight for.

WISCONSIN
Wisconsin probably will be an underdog just two times: vs. LSU and at Iowa. I?m not sure if the Badgers will be ready for the Bayou Bengals? full fury in the Aug. 30 opener in Houston, as the Wisconsin defense has some major questions along the front seven. But the Badgers should have a good shot to knock off the Hawkeyes in Iowa City on Nov. 22. Wisconsin could be rolling toward a Big Ten West title by the time it invades Kinnick. And recent history favors the Badgers in this game.