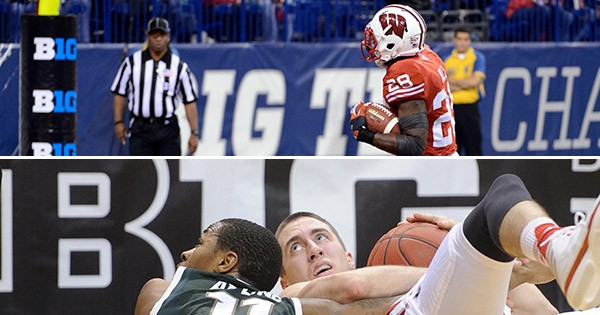 While the Big Ten?s borders stretch from the plains of Nebraska to the shadow of New York City, the iconic conference still remains anchored in the heartland of America. And, that?s the way it should be. Today?s announcement quelled any fears to the contrary, as the conference is committed to Chicago and Indianapolis as anchor cities for its marquee events.

News that the Big Ten football championship game will remain anchored in Indianapolis through 2021 and that the hoops tourney will rotate between Chicago (2019 and 2021) and Indianapolis (2020 and 2022) cements the notion of where the Big Ten lays its head at night. And, honestly, that notion never should have been in doubt. Access and proximity to those cities for other Big Ten schools is unmatched.

?The Big Ten Conference and member institutions are excited to return to Chicago and Indianapolis for future football championship games and basketball tournaments,? Big Ten commissioner Jim Delany said in a statement. ?These two cities have been tremendous hosts and partners with first-class facilities and an outstanding base of Big Ten alumni and fans who support conference events. We are proud of the history that we have developed with these two great cities and look forward to maintaining a significant presence in both locations.?

Many of you were miffed and questioned the Big Ten?s decision to move its basketball tourney to the Verizon Center in Washington, D.C., in 2017. I read your emails. I could feel the anger and angst.

Who is going to go there?

It?s too far away from most Big Ten schools.

No one really cares about the Big Ten in that part of the country.

Yep, I heard it all. Some of the concerns have merit. But Delany wanted to take one of the conference?s marquee events to one of its new territories. During Delany?s trip East in May to announce the hoop tourney?s stop in D.C., along with a series of games with Big East schools called the Gavitt Tipoff Games, he often said it was important to have a presence in the new regions with Rutgers and Maryland coming aboard in 2014.

"The important thing for us is that we want to talk about being in two regions in one conference, but we want to live it, too,? Delany said. ?It?s good, but it will require hard work to bind the conference together.?

And, why add Maryland and Rutgers if you don?t plan to take advantage of the mega markets? That?s exactly what Delany was doing with those moves last month.

It?s about capitalizing on the exposure and massive audiences in metro New York City and the Beltway area. It?s about expanding the Big Ten?s brand and cultivating new markets. It?s about folding in the conference?s new partners, binding two seemingly disparate regions into one.

But the Midwest is still home. That?s the point that was hammered home today.

The only available upcoming slot in the basketball tournament is 2018, as the league has said an announcement on the site is coming. I know it?s not usually safe to assume, but I would guess that year?s event is going to be in the New York City area. Again, just a guess.

While I love Indianapolis (nine-time hoops tourney host) and Chicago (eight) as host cities for the basketball event-especially Indy-I would have liked to have seen the event move more often. Why not play it in Detroit? Cleveland? Milwaukee? Minneapolis? The game has rotated up and down I-65 since it was first played in Chicago in 1998.

As for the football title game, Delany told me several times during his trip to New York and D.C., last month that it wasn?t going to move east. And, that has proven true.

"When you have 14 fan bases (for a basketball tournament) it's easier to move events than when you have two fan bases," Delany said. "I think central is the presumption, a central location (within the conference's footprint) would be the presumption."

Delany is correct. But I still would like to see the grid title game move every now and then. Since the game likely never would be played outside, the only places it could go in the Midwest are Minneapolis and Detroit, in addition to Indianapolis.

But, I?m OK with keeping the event in palatial Lucas Oil Stadium in the Circle City, which has served as host since the game?s inception in 2011.

The Big Ten?s heart beats loudest in the Midwest. It's home. And, it always will be.