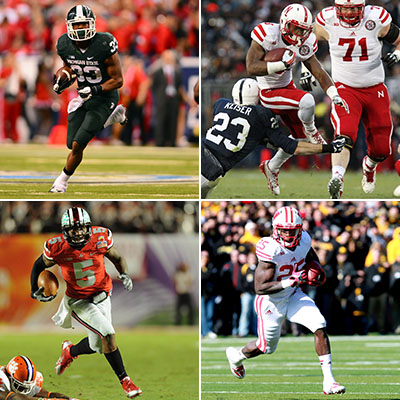 Four Big Ten teams are ranked in SportingNews.com's Preseason Top 25, headlined by No. 9 Ohio State. Reigning Big Ten and Rose Bowl champ Michigan State comes in at No. 12, while Nebraska (No. 17) and Wisconsin (No. 19) round out the Big Ten contingent. For the curious minds, Oklahoma is the site's No. 1 team.

"Urban Meyer says he?s more involved in the defense; says new defensive coordinator Chris Ash has made a difference in the way the Buckeyes get after the quarterback and cover in the secondary (two problems in 2013). OK, we?ll bite. It?s hard to argue with Meyer?s track record. Imagine what happens if the Buckeyes do get significantly better on defense - and still have QB Braxton Miller leading a dangerous offense."

"We?re at the point now in East Lansing where Spartans coach Mark Dantonio has this thing so figured out, and rolling so fluidly, that even a revamped defense won?t slow success. That defense, by the way, also has the best pure rush end in college football in Shilique Calhoun. The sooner Connor Cook develops into an elite thrower, the more dangerous the Spartans become."

"There?s no bigger question floating around Lincoln than who plays quarterback (Tommy Armstrong Jr. or Johnny Stanton), especially with star tailback Ameer Abdullah forgoing the NFL for his senior season. Then there?s the underlying issue: What can this program do to keep from losing another four games (six straight seasons under coach Bo Pelini) in 2014?"

"Only one team in college football has fewer returning starters (Utah State), but that lack of experience (especially on defense) won?t prevent the Badgers from pushing Nebraska for the Big Ten West Division title. Don?t expect many surprises: Running backs Melvin Gordon and Corey Clement (and perhaps true freshman Taiwan Deal) will pound away, while QB Joel Stave throws over the top."

All things considered, four teams seems about right. That said, with what Iowa returns and its favorable schedule, it wouldn't be a big surprise if Kirk Ferentz's team spends a lot of time in the top 25 of polls.