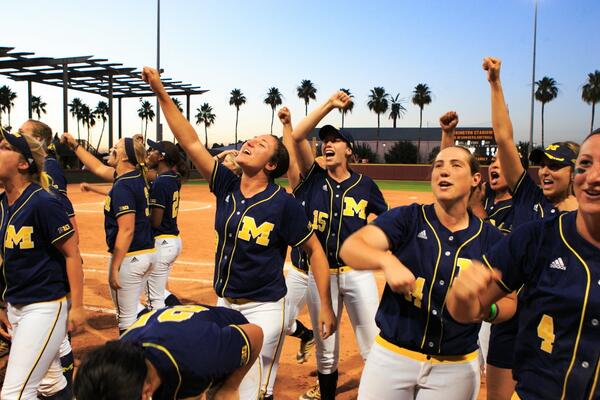 It's Super Regional time for softball, and three Big Ten teams are one best-of-3 series away from advancing to the Women's College World Series in Oklahoma City. Michigan and Nebraska open Super regional action Thursday night, at No. 8 Florida State and No. 2 Alabama, respectively. Minnesota, making its Super Regional debut, opens Saturday night at No. 1 Oregon.

To preview the three series, BTN.com tracked down BTN analyst Garland Cooper, the Big Ten's all-time home run leader and lone three-time conference player of the year. The former Northwestern star played in two WCWS, so she knows what Super Regional action is like.

Check out our full email Q&A with Cooper below.

BTN.com: The Big Ten faces three super-talented teams in the Super Regionals. Who has the toughest draw, and why?
Garland Cooper: I think Nebraska has the toughest draw facing Alabama in Tuscaloosa. They have Jaclyn Traina in the circle, a senior All-American who won a Women's College World Series in 2012, and they have an offense that performed very well last weekend. Alabama also has the advantage of playing at home and its home field can be a tough place to play. With that said, Nebraska's offense was incredible last weekend and is a good match for Traina, and between Tatum Edwards and Emily Lockman it has a battery that can shut down any offense in the nation.

BTN.com: How about the best draw, as far as matchups, style of play, etc.?
GC: I think Michigan has the best draw. They are coming off of some CRAZY victories with a lot of drama and are playing with a ton of heart and momentum. Just that alone will make them hard to beat. They will face one of the best pitchers in the country in Lacey Waldrop, but then again Michigan has one of the best offenses in the country so it will give her a run for her money.

BTN.com: Which opposing star player are Big Ten fans most likely to be talking about after this weekend?
GC: Keep a lookout for Cheridan Hawkins, the lefty pitcher for Oregon. She didn't have to throw a lot of innings in the Regional, but she will take the bulk of the workload this weekend. She only pitched 10 2/3 innings last weekend and struck out 19 - she is a fierce competitor in the circle.

BTN.com: Minnesota is Super Regional-bound for the first time in program history. What advice would you give the Gophers before first-pitch?
GC: What an exciting time for Minnesota softball! I would tell the team to enjoy every minute and soak it all in - these will be memories they will have for the rest of their lives. Have a blast and don't let the pressure of any situation ever outweigh the excitement of each moment. Of course, always remember regardless of who you are playing, they are just shirts in the other dugout and the game doesn't know who is supposed to win - so leave it all on the field!

BTN.com: Give me one player for each Big Ten team who could lead her team to the WCWS.
GC: For Michigan it is Sierra Romero - she is a force to be reckoned with on offense, sets the tone on defense and will be the leader of the team. For Minnesota it could be Sara Groenwegen - we saw her last weekend get it done in the circle and at the plate. She is just a freshman but plays like a veteran and can come through in big moments. Nebraska's player who could lead them to the WCWS would be Tatum Edwards - she is their ace pitcher and can completely confuse an opponent's offense. She also is one of the best hitters for the Cornhuskers and can change the game with one swing.

BTN.com: Is there momentum in softball? If so, no team must want to play Michigan after those wins at Arizona State and Lyndsay Doyle?s home-run saving catch.
GC: There is ABSOLUTELY momentum! No one in the NCAA Tournament has the same momentum that Michigan does right now. That will be the key to its success this weekend and is a main reason it is the most dangerous team in the field right now and the most likely to upset a top seed on its home turf. I mean, did you see those home runs?! That catch over the fence?! They showed incredible fight and heart?this Michigan team is unstoppable.

BTN.com: OK, how about some last-minute predictions?
GC: Every one of these Big Ten teams has the tools necessary to beat the best teams in the country. It won't be easy for any of them, but if we learned anything last weekend it is that these teams will fight, scratch and claw their way through these Super Regionals. All of these teams played a "Game 7" in the Regional Championship and played with their backs against the wall at some point. All of these teams have what it takes to get to the WCWS and all of them could easily upset their opponents this weekend - there is nothing more dangerous than teams that have nothing to lose and a ton of heart!