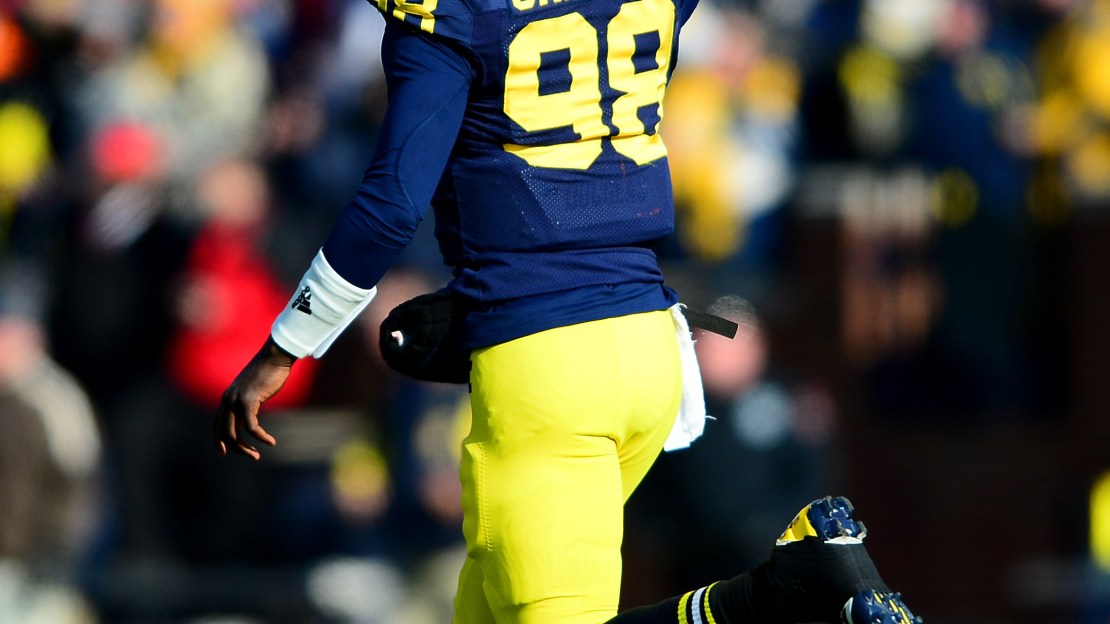 There is a sense of urgency around Ann Arbor as Brady Hoke and his short-sleeved shirts enter their fourth season at the helm.

In 2013, Michigan saw a 6-1 start melt into a forehead-slapping 7-6 finish, as the Wolverines went 1-5 down the stretch capped by an ugly bowl loss to Kansas State. And things could have been worse, with close calls vs. Akron and UConn and a triple overtime win at Northwestern.

Add it all up, and Hoke has seen his win total go from 11 to eight to seven. Not a good trend.

A moribund offense played a big role in Michigan?s struggles, so Hoke changed coordinators by dumping Al Borges and bringing in Doug Nussmeier from Alabama. A big focus: improved play along the offensive line.

The schedule offers many challenges for a program looking for its first Big Ten title since 2004.

Here?s a breakdown of the 2014 schedule.

Toughest non-conference game: All eyes will be on South Bend, Ind., on Sept. 6, in what is the last scheduled meeting between iconic rivals Notre Dame and Michigan. The prime-time clash will be a good litmus test for a Wolverines squad that needs a win to build confidence coming off a 7-6 season. Michigan has won four of the last five meetings. The lone defeat: In 2012 in South Bend, when Denard Robinson committed six turnovers in a 13-6 loss.

[ MORE: Dienhart: Big Ten should say "no" to any games with Notre Dame ]

Toughest conference game: Going to Michigan State on Oct. 25 won?t be a treat. In a scheduling oddity, the Wolverines have to travel to East Lansing for a second season in a row. Michigan was absolutely embarrassed in Spartan Stadium last fall, losing 29-6. The Wolverines had 168 yards of total offense with a school single-game record low minus-48 yards rushing on 29 carries (7 sacks). The Wolverines have lost five of the last six meetings and haven?t won in East Lansing since 2007. The momentum in this fierce rivalry has changed dramatically.

Who they don?t play: The Wolverines miss the top three teams in the Big Ten West in Iowa, Nebraska and Wisconsin. So, that?s nice. But Michigan also misses Illinois and Purdue, two very beatable foes. Oh, well ? win some, lose some.

Easiest game: I wanna say it?s the season-opening visit from Appalachian State on Aug. 30. But, we all know what happened the last time App State visited Ann Arbor, pulling off the shocker of all shockers with a 34-32 win in 2007. So, let?s go with the visit on Sept. 13 from Miami (Ohio), which went 0-12 last season and has a new coach in former Notre Dame offensive coordinator Chuck Martin.

Rugged stretch: There?s no horribly difficult run. The toughest looks to be between Oct. 11-Nov. 8, when Michigan plays host to Penn State, goes to Michigan State, welcomes Indiana and plays at Northwestern. Michigan has lost four in a row to Penn State and five of six to MSU. The Wolverines needed a triple-overtime miracle to win in Evanston last season. Recently, Indiana has pushed Michigan, which had to battle hard to win 36-33, 42-35 and 63-47 over the Hoosiers in the last three meetings.

Best chance to be upset: The visit from Indiana and its high-flying offense on Nov. 1 looks scary. But let?s go with Minnesota?s visit on Sept. 27. The Wolverines have dominated the Little Brown Jug series, going 39-3 in the last 42 meetings since 1968, only losing in 1977, 1986 and 2005. But the Golden Gophers welcome back seven starters on both sides of the ball for a program that continues to improve as it enters Year Four under Jerry Kill.

Best chance to pull an upset: Michigan could win at Ohio State in the season finale on Nov. 29. It?s a rivalry game. And, we all know what can happen in those. Plus, Hoke may be coaching for his job. Still, the Buckeyes have dominated this series of late, going 11-2 vs. the Wolverines in the last 13 meetings. When did Michigan last win in Columbus? It was the 2000 season, when John Cooper was the Ohio State coach.

Must win: Michigan must dispatch visiting Penn State and new coach James Franklin on Oct. 11, which would end a four-game losing skid in the series. Before that, Michigan won nine in a row vs. Penn State. Plus, a win vs. PSU would give the Wolverines some mojo as they enter the toughest part of their schedule.

Bye weeks: Michigan will play seven games before its first bye. Ideally, the bye would be a week or so earlier. However, the timing is good, coming between the visit from Penn State and trip to Michigan State. The Wolverines will need all the prep time they can get for the Spartans. Michigan will play three more games before its final bye between the trip to Northwestern and the visit from Maryland, giving the Wolverines just two games after their last bye.