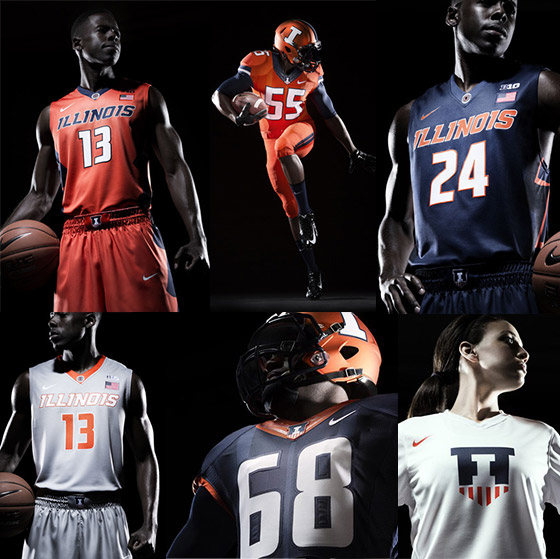 Illinois will unveil its new uniforms for the Nike rebrand at 8 p.m. ET Wednesday night. Several photos of the designs hit the web Tuesday night, and, according to IllinoisLoyalty.com, the picture above was posted to nikeinc.com. Whether the uniforms were leaked or these are just several of the designs Nike and Illinois drew up, they are fun to consider. See several pictures of the designs in this post.

Again, there is no word on whether these uniforms are the real thing. We'll all find out at 8 p.m. ET tonight. Even if they are legit, Illinois figures to have additional alternate uniforms, ones worn for rivalry games, Homecoming and other special events, that will be unveiled at a later time.

Here are a few more photos:

These are clean and simple, and it's hard to complain about that. Also, as was the goal, it looks like Nike successfully matched the blue and orange across all sports, something that has been a struggle in recent years.

Best of all: the uniforms hardly scream "Oregon," which is always a good thing when Nike is designing your threads. One of the best touches appears on the football uniform, where Nike included subtle vertical stripes, a likely nod to the Red Grange era. That would make sense, considering the slogan of this rebrand is, "Respect the Past. Represent the Future."

My biggest complaint would have to be the two-tone "Illinois" on the white basketball jersey. It's a design Illinois has used the last few seasons, and it doesn't do much.