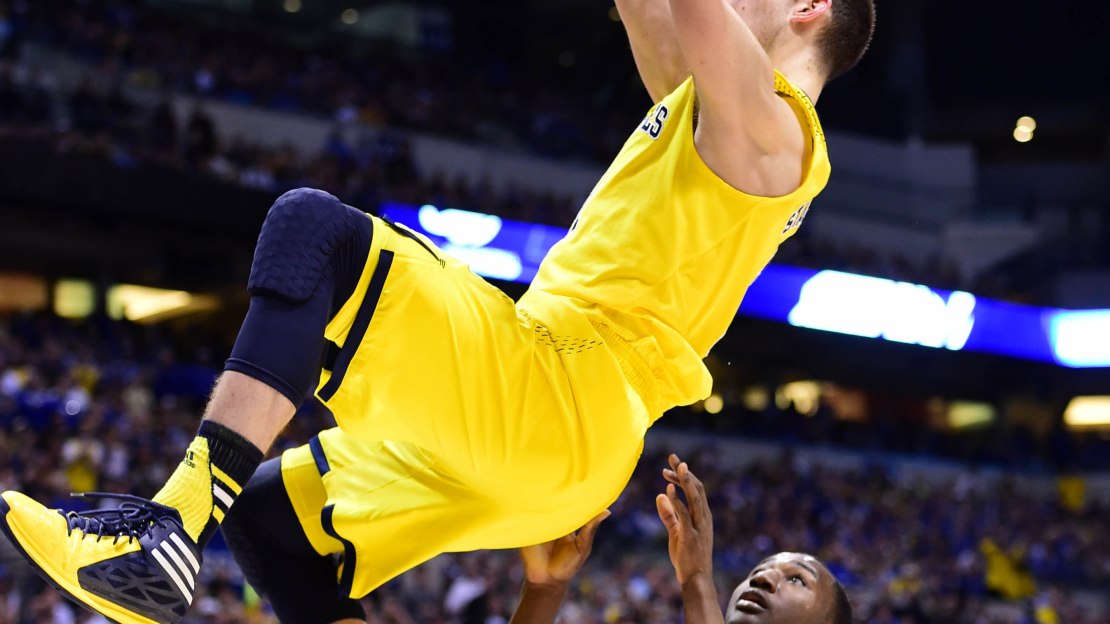 Three Big Ten players have announced they are going pro, including Indiana's Noah Vonleh, the Big Ten Freshman of the Year, and Ohio State's LaQuinton Ross. Other Big Ten stars have a decision looming, and the deadline is April 27. Who will stay, and who will go? I asked NBA draft analyst Ed Isaacson for his Big Ten draft thoughts.

BTN.com: What do you think of LaQuinton Ross and Noah Vonleh?s decisions to leave for the NBA?
Ed Isaacson: Neither is ready, but both could go to situations which could help them more than college at this point. Vonleh, a likely lottery pick at 18 years old, should be a developmental priority for whatever team takes him. Ross' growth has seem to stall at Ohio State and a new situation could help him

BTN.com: Do you think there was anything Vonleh, a consensus lottery pick in mock drafts, could have achieved by staying another year?
EI: Vonleh is still only 18 years old, and as well as he played, is still raw in many ways. Another year likely would have added to his development, plus with an Indiana team in the midst of numerous defections, he would have been a clear team leader along with Ferrell next year. As a likely lottery pick though, Vonleh will get plenty of playing time to likely keep developing well, but there still has to be some concerns of how he will mentally handle the leap at his age. Some have handled it well, some have not.

BTN.com: What kind of pro will Vonleh be - do you see him being a stretch big or a guy who can develop down low?
EI: Ideally, he will continue to develop as both. I understand his ability to play on the perimeter makes him more attractive, but his development as a post player suffered as he spent more time on the perimeter. He has the physical tools to be a good post player, but he still needs a lot of work.

BTN.com: The Ross decision, it?s not a huge surprise. That said, do you think he has a career in the NBA?
EI: Ross has the tools to one day make it to the NBA, though I don't see him getting there right away. A year or two overseas or in the D-League, could help him polish parts of his game which still need work.

BTN.com: Which Big Ten senior will be the first off the board?
EI: Adreian Payne. He could go as high as late lottery, and should almost certainly picked by low 20's.

BTN.com: I have to ask this: Is there any chance Aaron Craft gets drafted?
ET: Absolutely. Put aside the portions of America that either love him or hate him, he is an above-average point guard and very good defender. Coaches will love him, and wouldn't be surprised to see him picked in the middle to late 2nd round.

BTN.com: Which Big Ten player yet to announce his future plans is the best NBA draft prospect: Stauskas, Harris, Dawson, GR3, Dekker, McGary, Hammons?
EI: A lot of good choices on this list, but long-term, I think either Harris or Robinson III is the best long-term prospect.

BTN.com: Of the Big Ten?s returning players, who helped his draft stock the most this year?
EI: This is easily Stauskas. He went from being primarily known as a shooter to a versatile offensive player who emerged as one of the Big Ten's best players.

BTN.com: Could any of these guys leap Vonleh as the conference?s top draft pick?
EI: Depending on where teams are picking and what kind of player they are looking for, either Harris or Stauskas has an outside chance of being picked ahead of Vonleh.

BTN.com: Mitch McGary is an interesting case. Considering his age and season-ending injury, what decision would be the best for the Wolverine?
EI: Without knowing how far along he is in his recovery, its tough to say what he could show for teams before the draft. McGary's rise last year was based on a good final 6-8 weeks of the season, and he is still very much a player who has a lot to prove to teams. Regardless of his age, coming back for one more year will only help him as a player and give him a chance to secure a place higher in the draft.

BTN.com: Branden Dawson finished his career with a bang in the postseason. Is he a guy who should strike while the iron is hot?
EI: I think instead of trying to make the jump right now, Dawson should use a strong tournament as a leaping off point to become one of the top seniors in the country next year. Besides missing five weeks with the broken hand, Dawson still has many areas of his game which need to be developed. With Appling, Payne, and likely Harris all leaving, Dawson should have the opportunity to become the Spartans' star next season.

Branden Dawson
Why he should stay: Needs to become more versatile on offense and work on his perimeter defense. Could be the team's star next year.
Why he should leave: He thinks he could improve his game more as a pro somewhere.
Prediction: Stays

Sam Dekker
Why he should stay: Entered the season as a potential first-round pick but didn't show the improvement many expected. Needs to show he can be a reliable perimeter shooter.
Why he should leave: Still a favorite among NBA teams, he could work out the inconsistencies in his game at the pro level.
Prediction: Stays

A.J. Hammons
Why he should stay: Showed very little improvement in many ways from freshman to sophomore year. A dominant junior year could make him a first-round pick.
Why he should leave: Skilled big men and shot-blockers are always in demand at the NBA level and Hammons' development may have stalled at Purdue.
Prediction: Enters Draft

Gary Harris
Why he should stay: Has the skill to be an NBA player, but needs to be more consistent, especially as a shooter.
Why he should leave: Considered by many to be a lottery pick. The NBA-style game is a better fit for his ability.
Prediction: Enters Draft

Mitch McGary
Why he should stay: Missing the season ended the momentum he had at end of freshman year, and many were divided on his potential to begin with. Coming back strong can only help him long-term.
Why he should leave: He'll already be 22 years old by this year's draft.
Prediction: Stays

Glenn Robinson III
Why he should stay: Should finally emerge as Michigan's star player. Showed flashes of what people expected as a sophomore, but not consistently. Should look better with Walton having a year under his belt as point guard.
Why he should leave: Teams still like his skill and athleticism. Could flourish enough in workout situations to alleviate NBA concerns.
Prediction: Stays

Nik Stauskas
Why he should stay: Needs to show he can be a better perimeter defender. Coach Beilein can let him continue his development as a passer and ballhandler, especially in pick-and-roll situations.
Why he should leave: His shooting ability already made him a legit prospect, but with the versatility he showed this year, he impressed many NBA people.
Prediction: Enters Draft