Merriman: Remember Appling's career for all he did right 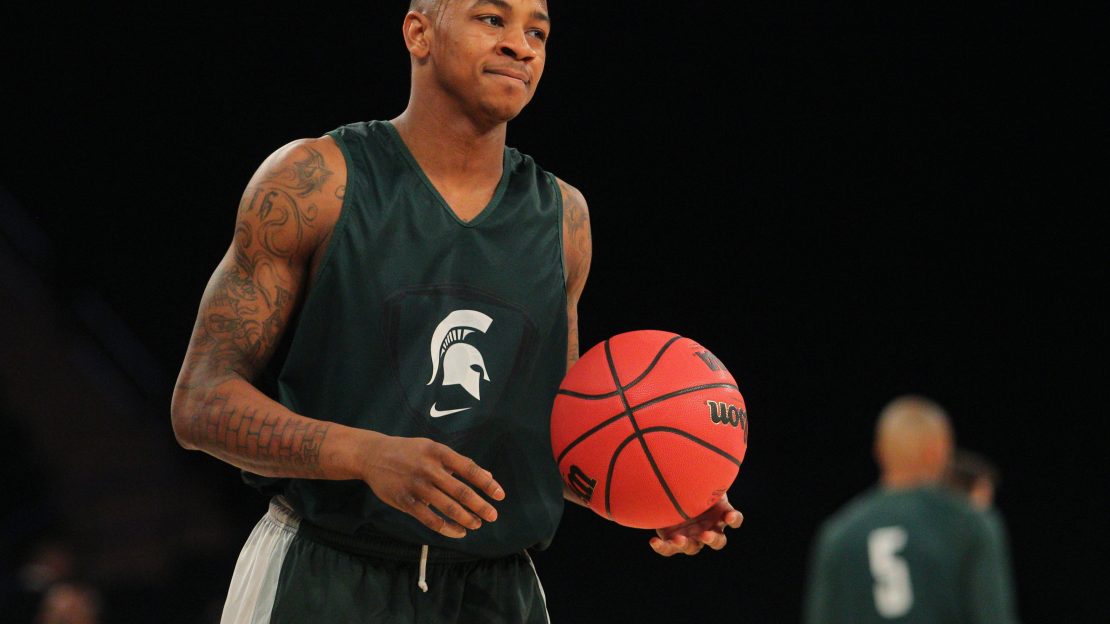 Upset. Frustrated. Disappointed. Those are some tough words to describe a 22-year-old kid.

That?s exactly what Keith Appling was when he committed to play basketball for Tom Izzo back in August 2008. A tough, gritty kid from inner-city Detroit, Appling came to Michigan State because he wanted to play in a Final Four - an experience that every four-year player under Tom Izzo had experienced until this season.

Appling arrived in East Lansing with monumental expectations. A McDonald's All-American, the guard gave MSU fans a taste of what was to come in the 2009 Michigan High School Basketball Championship game, where he scored an MHSAA record 49 points in leading Detroit Pershing to a state title at the Breslin Center.

On Sunday, almost exactly four years after Appling led his high school to that memorable state title, he saw his Michigan State career come to a close in the East Region final. His stat line: 2 points, 2 assists, 4 turnovers and 5 fouls. His fifth and final foul came when he got a piece of Connecticut star Shabazz Napier?s arm, down 53-51, with 30 seconds remaining in the game.

Appling buried his head in his hands after the foul was called and ran to the end of the Spartans? bench. Napier made all three foul shots and No. 7 seed UConn went on to complete a 60-54 upset of the No. 4 seed Spartans to reach the Final Four.

What a tough way to end a career. A playing career that was filled with plenty of highs, but one that ended with the lowest of lows.

Fans took to social media following the game, some in support of Appling, but many taking the opposite route.

Those were the most common words used to describe the feeling directed toward the Spartans? senior guard. And while Appling certainly didn?t play his best game on Sunday afternoon, it?s simply not fair.

If Appling came to Michigan State and dropped out of school, got in trouble with the law or got kicked off the team, then yes, it would be fair to label him as a disappointment.

But Appling arrived at Michigan State as a fatherless child, losing his father in the ninth grade after he was slain in Detroit?s west side. He has a tattoo that reads "Dad R.I.P" across his left arm in honor of his late father. He was raised by a single mother, Tottie Collins, who would watch her son play basketball at the nearby playground, always keeping an eye on him to make sure he would walk home safely.

Appling should not be remembered for what he failed to do in his senior season, but instead for all that he did do in his career. On top of the team accolades, he stayed out of trouble, got good grades, was an exceptional teammate, and will become the first member of his family to receive a college degree.

And let?s not forget, he managed to play some outstanding basketball, as well, during his time wearing the Green and White. Maybe not to the level that fans expected, but it?s tough to argue with 1,500-plus career points and nearly 500 career assists.

Appling battled through challenging injuries throughout his senior season, specifically a wrist injury he suffered in a loss to North Carolina on Dec. 4. He aggravated the wrist again against Indiana a month later, which forced him to sit out three games, the first games he missed while at MSU.

Appling would return, but he was never the same player. He averaged 4.9 points the remainder of the season and often shied away from taking shots in which he would routinely take during his first three years. But despite the ailing wrist, the soft-spoken point guard continued to battle. He let it be known time and time again that he wanted to be out there on the court and do whatever he could to help his team make another memorable Final Four run.

?Final Four, that meant a lot to me, to my teammates,? Appling told the media following Sunday's loss. ?For us to come up short and have the opportunity to be so close, it just hurts so bad. Words can?t even describe it.?

Appling came up short of his ultimate goal. His college chapter has come to a close, and this story fell short of a fairytale ending. But don?t fool yourself, this is not the last time we will hear the name Keith Appling.

Good student. Good teammate. Soon to be college graduate. Appling will leave Michigan State as one of the most accomplished players in the Tom Izzo era.

Before you jump to associate those three words with the name Keith Appling, pause and think about it for a moment. Let?s not remember Keith Appling for how he fell, but instead for how he grew as an individual.