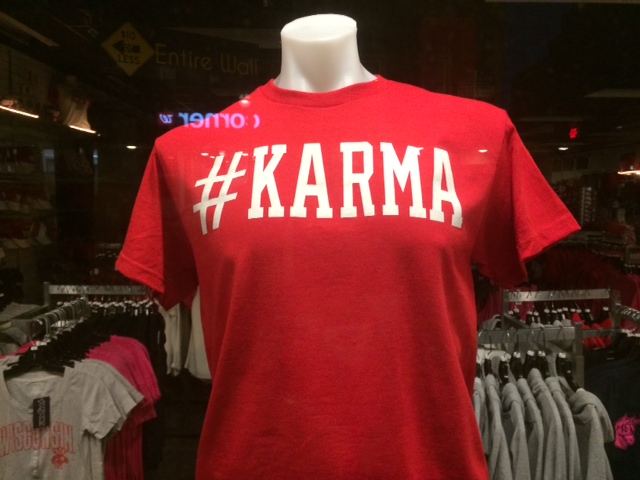 Wisconsin fans will appreciate a shirt for sale at a store across from the University Book Store. It's a simple red shirt with "#KARMA" across the chest, an obvious dig at former coach Bret Bielema's wife, Jen Bielema. Jen famously tweeted "#karma" after the Badgers lost early last season at Arizona State, the controversial game in which the officials let time expire on Wisconsin's final drive in enemy territory.

At the time, the Bielemas and Arkansas were feeling confident, with the Razorbacks jumping out to a 3-0 record in the coach's first season since leaving Madison. Arkansas would go on to lose its final nine games, a span in which Wisconsin fans – and non-Wisconsin fans – frequently got revenge by tweeting "#karma," often times Jen Bielema's way.

The original tweet made little sense and surprised many people, because Bielema left Wisconsin on his own terms and his wife had no reason to revel in a heartbreaking loss that her husband's former players and recruits just suffered.