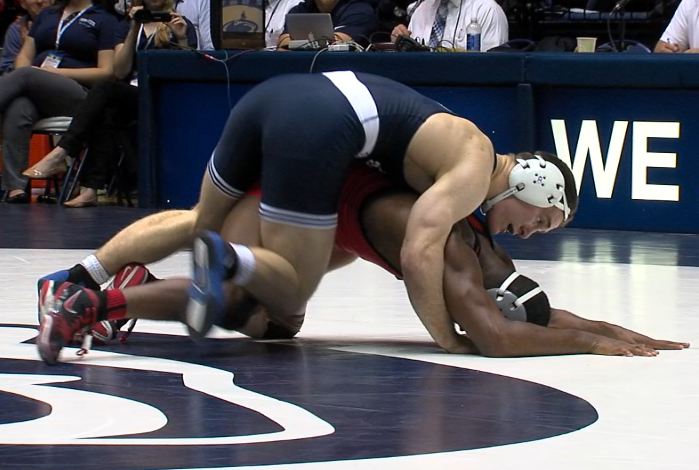 We decided to have a little fun providing a preview to this year's B1G Wrestling Championships on March 8-9 at Wisconsin. BTN wrestling analyst Jim Gibbons, an NCAA champion both as a wrestler and coach at Iowa State, will break down one weight class a day, and pick a winner, each day through March 7. Today, it's the 174-pound weight class.

Pick: Matt Brown, Penn State. One of the roles head coaches have in a NCAA qualifying meet like the Big Ten Championships is to seed the tournament. That gets to be difficult particularly when individuals have not met during the season. That is the case in this weight where last year's B1G champ, Penn State's Matt Brown, has not wrestled Nebraska's Robert Kokesh this year. Ultimately, situations like this come down to a coaches vote, which can make this interesting to see what the coaches decide.

Neither Brown nor Kokesh will get much of an advantage. Iowa's Mike Evans owns a W over Minnesota's Logan Storley, likely meaning Evans will be the three seed and Storley the four. The seeding is anybody's guess, at the time this goes to print – rock, paper, scissors, anyone? These four wrestlers represent three through six in the national rankings, which should lead to a very exciting semi-final round.

My pick is Brown, the NCAA runner-up. I like how he doesn't take any part of a period off – always trying to improve right up to the buzzer. Kokesh is a tough out and learned a lot about himself in the consolation rounds last season, finishing third in the B1G and NCAA's. The next step is bottling it and taking it to the championship rounds.

Mr. Upside: Logan Storley, Minnesota. He can win this tournament. Storley finds unique ways to win and is dangerous in the down position. Trying to ride him is like getting into a referee's position with a sea lion; not likely. He was the number one seed last year and finished a disappointing seventh. Competitors like Storley do not have to be reminded.