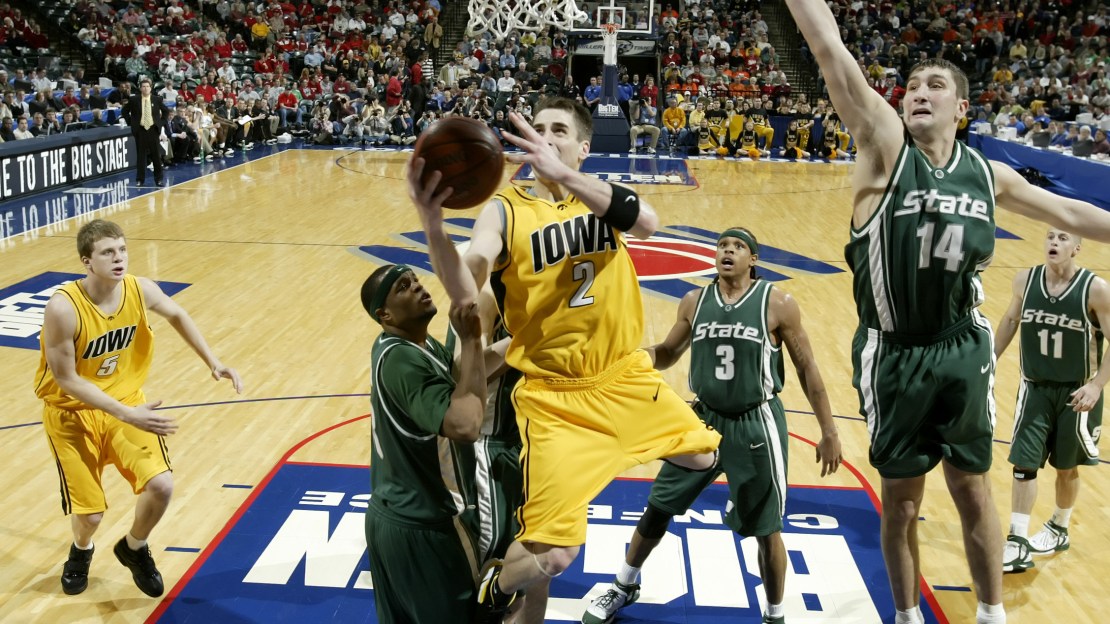 Nowadays, following a pro career overseas and a stint with the Iowa Energy, Horner is the head coach at Valley High School in West Des Moines, Iowa.

Read BTN.com's full email Q&A with Horner in this post.

BTN.com: You accomplished so much during your Iowa career, but I'm curious what was your top achievement?
Jeff Horner: The biggest achievement had to be winning the Big Ten Tournament my senior year. Second, was just getting to be friends with my teammates. A lot of guys come from different places and our team chemistry was very good.

BTN.com: Where does your 2006 Big Ten tourney Most Outstanding Player trophy live?
JH: At home in Mason City, in my parents basement. I am not a big guy on trophies and that kind of stuff. I think my parents still have all of those things.

BTN.com: Point guards aren't exactly known for their prowess on the boards, so what made you such a great rebounder?
JH: Playing football in high school made me the competitor I was on the basketball floor. I loved to hit people in football, and I just always had a knack for being around the ball. I think that was my key for being a good rebounder as a PG.

BTN.com: Every boy pretends to be their hero while shooting baskets in the backyard or driveway. Who would you pretend to be?
JH: Pretty cliche, but I was always Michael Jordan.

BTN.com: How about your funniest behind-the-scenes story about Steve Alford?
JH: There were a lot of good moments, and he was kind of no non-sense type of guy. We always had a thing on our team that if Coach came to practice with his hair gel in, he was in a good mood. If he came with no hair gel and it looked like he had been watching film all night, we knew we were in a for a tough one.

BTN.com: Which former Iowa teammate(s) do you keep in touch with the most? Any of them have a really cool job, life?
JH: I am not a best friends type of guy, so I keep in touch with a lot of my former teammates. The four guys I talk to the most would be Greg Brunner, Adam Haluska, J.R. Angle and Jack Brownlee. Brunner is still playing (Italy), Haluska is doing medical sales (Iowa City), Angle coaches with me (West Des Moines), and Brownlee does medical sales as well (West Des Moines).

BTN.com: A member of the last two Iowa teams to go dancing, what advice would you give the Hawkeyes about the NCAA tournament?
JH: Obviously, our NCAA tournament experiences weren't the best, but they were great experiences. My advice to them would be to just go out and play. Everyone gets so caught up sometimes in the moment that the most important thing is winning the game. Staying focused is the biggest key.

BTN.com: You're a high school coach nowadays – how would you describe your coaching style?
JH: I want my teams to get up and down and run. For me, sometimes though my coaching philosophy has to change a little bit based on our personnel. In college, you recruit the guys to fit your style. Ultimately, I want our kids to press, push the ball and play together.

BTN.com: You must run into Fran McCaffery and staff every now and then, right? What do you think of Fran, and has he ever recruited any of your guys?
JH: Fran is a great guy and a great coach. He has come in and given Iowa fans everything they have wanted in a coach. He is getting great players and he is playing an exciting brand of basketball. He has recruited two of our guys since he has been there: Peter Jok (Iowa) and Kale Abrahamson (Northwestern).

BTN.com: If you had to play for another Big Ten team, who would it have been?
JH: At the time, I had a pretty good relationship with Bill Self, so Illinois would have been the other Big Ten school.

BTN.com: Who would play you in your biography?
JH: Good question. I have a lot of people that come up to me and say you look like this person or you look like that person, but if I had to say there was one person they say the most it is Chris Pine.

BTN.com: If you could listen to only one song the rest of your life, what would it be?
JH: Til I Collapse- Eminem