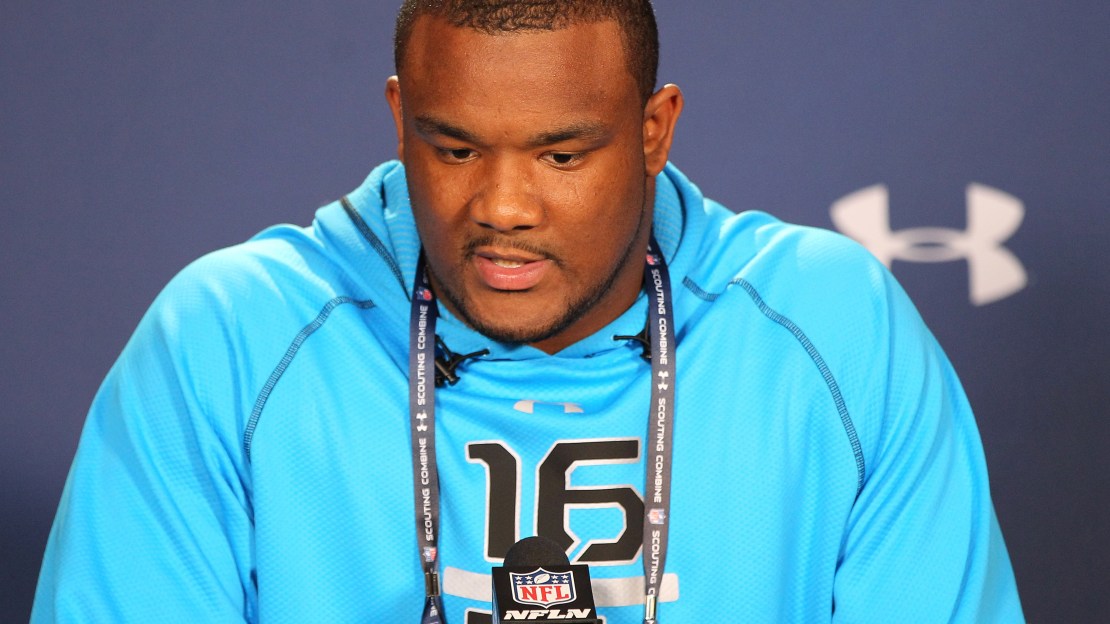 The NFL Combine wrapped up earlier this week. And the Big Ten was represented well as players tried to impress for the 2014 draft. I talked to NFL Network analyst Charles Davis to get his thoughts on some of the top Big Ten talent that was on display in Indianapolis. Last year, just one Big Ten player was selected in the first round when Wisconsin center Travis Frederick went at No. 31 to the Dallas Cowboys.

Count on more Big Ten names getting drafted in the first round this year when the NFL Draft starts May 8 through May 10 in New York City.

A: Taylor Lewan jumps to mind. His dimensions are impressive. I try not to get too caught up in the stopwatch and all of that, but it?s hard not to with this guy. When a guy that size runs a 4.87 40, and looks smooth doing it, you are impressed. And he?s carrying 307 pounds. It?s amazing to see a guy that big who is so lean and skillful. He has good footwork and a passion to play. He caught my eye in a big way.

Q: How did Bradley Roby look?

A: Bradley Roby had a very nice Combine. I thought he was ascending by the end of the year. He was touted at the beginning of last season and then was suspended. I thought he had an NFL hangover because he didn?t go out the year before. I think he felt a bit sorry for himself early. I thought he got it together. I think the Jared Abbrederis game (10 catches for 207 yards and a touchdown) got his attention because he didn?t play well. But I think he bounced back and by the end of the year was one of the best players in the country at his position. He got himself back into first-round consideration in the Combine.

Q: Any other Buckeyes make an impression?

A: I kind of knew what to expect from Jack Mewhort going into the Combine. I had seen him play. He?s a good player, a left tackle. He may be able to slide in and play guard, but I think he?s better suited for tackle-more so at right tackle than left tackle.

(Ryan) Shazier didn?t do the on-field stuff, but he did the testing and tested well. That didn?t surprise me. I talked to some people and a concern about him is frame and size. Some worry about Shazier getting matched up with size. But as far as being a run-and-chase linebacker, he?s pretty good. I like him a bunch that way.

I wanted to see a full workout from Carlos Hyde, but he popped the hamstring on his first 40 and we didn?t see everything else. But I?ve seen him play in person and on tape. He?s a big man with really good feet. Despite the early suspension, he still put up a 1,000-yard season. In the Michigan game, he was an absolute man. I?m not so sure how eager people are to come up and hit that big fella. I compare him to Eddie Lacy coming out of Alabama last year. I like Hyde better than Lacy. Like Lacy, Hyde can catch the ball.

Q: Were you impressed with Darqueze Dennard?

A: I like Dennard a bunch. Always have. After the Combine, you wanted to go back and watch more tape of him. He has been a press-corner guy his whole career. Never plays off his guy much. You worry about his ?long? speed, but he ran 4.51. That?s fine. I think he?s a press-corner guy. He was a little stiffer than I thought in the back pedal. It?s not that he can?t do it, he just hasn?t done much of it. He needs to work on playing off coverage, turning and flipping his hips and driving. He and Oklahoma State?s Justin Gilbert were the top corners coming into the Combine. I think more teams will have Gilbert on top of their board now because of his ability to move and his fluidness.

Q: Many eyes have been on another Spartan: Max Bullough.

A: Yes. He won at the Combine when he weighed in at 240-something pounds. That?s a big deal. When we saw him at the East-West game, he was about 260. He had gotten huge. No one knew where that came from or what that was about. He didn?t play as well as a senior as he had the previous three years and got suspended late last year. But good football players find their way into the league. He can run your defense and be plugged into the middle.  The hard thing for Bullough now is he?s coming into what?s essentially a passing league. He needed to play in the AFC North when all of those teams were running the ball. He would have been perfect. He may have missed the window by a couple of years. But he?s still a good player, terrific bloodlines, loves the game. There?s a place for him.

A: Speed killed Allen Robinson. He?s a big receiver, love his ball skills, good route runner. People knew the ball was going to him and he still got open. He didn?t run well, clocking at I think around 4.7. And that hurt. Big receivers still have to be able to stretch it out a bit. He?s 210, 215 pounds. Mike Evans of Texas A&M is 6-5, 230 and ran in the high 4.4s. That was huge for him. Robinson may not be a first-round pick now because of his speed.

A. Tested well. He looks the part. A 6-2, 216-pound corner. Everyone is hip on the Seattle model, trying to get those long corners now. That?s him. And that pushes him up the draft board. He?s a former receiver, so you figure he has good ball skills. His Combine was good. I think he verticaled 41 inches. Teams will be excited to get their hands on him.

Q: What about the Iowa guys?

A: C.J. Fiedorowicz is a combo guy, an in-line tight end who can catch. He isn?t super dynamic. But he had a good Combine. And there were some tight ends that didn?t have good Combines. The Texas Tech guy ran slow. Fiedorowicz was steady. He caught the ball and I thought he ran his routes crisply. You know he can block. Iowa tight ends always can.

The three linebackers had their moments. (Christian) Kirksey and (Anthony) Hitchens were what I expected, athletic guys who can move. But I am most intrigued by James Morris. I think Kirksey and Hitchens will get more attention because of their athleticism, but I think Morris is the best player of the trio. He is a poor-man?s Chris Borland. And I am really high on Borland. He?s one of those guys who is a mid-round guy on most boards, but I think he?s better than that. I never see him out of position. He runs better than people expect. He?s smart about what he does and has a real passion for what he does. He could be a second-round guy.

Q: Did Ra?Shede Hageman stand out?

A: Hageman showed some people why you drool over him. He?s a monster. He tested through the roof, which is what you?d expect. Good footwork, the whole deal. The question he?ll have to answer is why he dominates on one tape and you can?t find him in another. He just wasn?t consistent from game to game.

Q: Who will be the first Big Ten player picked?

A: I think Lewan will be the first Big Ten player picked. Those tackles will come off the board pretty fast. I have a hard time thinking he won?t go before Pick 15. But Dennard could go first. I think the Lions may take him at No. 10, but Gilbert could be the guy for Detroit now. Don?t think Detroit will take Dennard just because he?s a home-state guy. After that, Roby is in that category too because he?s a corner. And you can?t get enough corners.